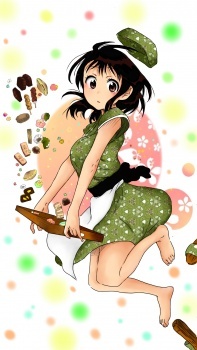 Yeah, i guess. How about you? Enjoying your summer?

Jikanwa Jul 8, 2013 5:02 PM
Hello! i saw your reading Girls of the Wild's. There is now a fan club dedicated towards the Webtoon/manhwa! Please feel free to join :3

Also, if you're a fan of Webtoons (aka Webcomics) then you can join this club:

Baka -tsuki hasn't gotten past the prologue yet. I read the summary on a forum here.

I think I'm basically allowed to go wherever I can have a free place to stay and they'll send me. Why not take a bus to Jersey or something? My sister drove all the from orlando to ft lauderdale for $5 . If you could go anywhere where would you go? And well if I end up in New York I'll let you know.

Tepes973 Jun 13, 2013 12:02 PM
Right right, I mean I don't want it to end end either, but I want the story to progress. Still though even if it did end we still have the anime and light novel coming, so I'm fine with any course.

Haha that's comforting. I got a little wary when Irisu came into the picture, but that ship sailed. NOt much has happened yet (on episode 12 of season 1) but there's still time.

Yes, the LN. Let's just say no one will be happy with that kind of ending (for all those who have read the spoilers I've yet to see a person who was, in fact everyone's seeth right now over it.)

I might be going to either New Jersey, where most of my family lives, or Virginia where my aunt just moved after 2 (maybe 3) years of deployment in Spain, my uncle is in the air force. Or maybe both. Idk if I'll go to either, I did kinda bad in school this year so my parent's won't be giving me much for my birthday thats coming up (not that they ever do) so I'm trying to choose wisely. And yourself?

Tepes973 Jun 13, 2013 12:32 AM
Right ^.^ Even though it's obvious it's still interesting to see how it all ties together, even though I really do like them I kinda wish the story was a bit more focus and had less filler, sometimes it almost feels like the writer forgot about that part of the story. I guess all I'm trying to say is a little development would be nice, (and adding new characters doesn't count >.<)

Haha, it's funny 'cause when they first showed her and I all you saw was the the back of her head I was like "Pfft, I bet she's just average there's no way the artist would gave a pretty girl messy hair like that" *she turns around* "... (: o)" Haha, I never was a fan of that haircut, or even her styled eyes, but they look so good on her it should be criminal. I can understand why he doesn't stand a chance.
I hope they end up together, but I saw this wasn't categorized as a romance so I'm not expecting anything but will later make his confession, their wedding, and possibly even draw up some kids :p Either way though, even at this point I can see why you do. I'm completely hooked on it (so much so that it killed my rage over that stupid Oreimo ending.) I'd be marathoning day and night it it wasn't for the fact that I'm busy packing. Haha, same here. ^.^

Tepes973 Jun 12, 2013 10:36 AM
Oh I didn't mean it like that, I don't even consider her a competitor no matter what happens, I just find her an interesting side character. SHe reminds me of the galge character Yozora had to play in Haganai Next. And yea I think the ending kinda speaks for itself once you read the One Shot that the the series was actually based on.

Haha yea, I didn't read the discription before watching so it was pretty confusing at first, especially with all the surrealism and whatnot, but I think I more so understand it now.
So far my favorite moment for them would be when she said "Oh so this isn't a mixed bath" (*'.'*) and then when he fainted thinking about her. I'm only up to like 7 or 8. I absolutely love how wrapped around her finger his is, and honestly wonder if she does it on purpose or not. They're the cutest pairing I've seen in a while.

Tepes973 Jun 11, 2013 10:59 PM
I see, I like Tachibana as well, especially in the Valentines Day chapter, and whenever she get's mad and losses her 'lady' persona (which I do think is a bit much to do for another person.) Personally, I like Chitoge the best , I was dieing in the scene where they get trapped in the warehouse. I also kinda like Haru, mostly cuz of her name, and really don't mind anyone except for Kosaki (solely because she's competition.) So who do you think is the 'best girl'? Who do you think he'll end up with? And who's key do you think is the real one?

Haha, I do. Thank you for showing me it, I really like it. A lot of the time I can't keep up with where Oreki, or really understand where he's going with it, but I do like his. I find his interactions with Chitanda extremely adorable (I wonder if Yui from SAO was supposed to look like her or vise versa) and I am extremely curious as to how his mind really works. RIght now I'm watching episode 6 of season 1. I'm really happy to watch this though, I feel like it's making me a much better writer. ^.^

Ahh I see, will do. It does look really interesting. I haven't seen any fantasy in a while so it should be refreshing. ^.^