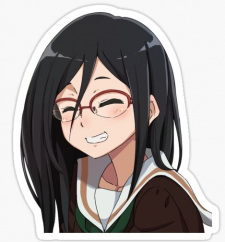 rtil Aug 11, 12:10 PM
100% agree. some character arcs were so stunted i wasn't even sure what exactly was going on. probably doesn't help that i haven't seen the 1st season in a few years.

rtil Aug 11, 12:03 PM
wishful thinking but i'd love to see a 2nd season. i think there's still a lot more they could touch on in the industry especially pay but maybe that's a sensitive subject.

rtil Aug 11, 1:41 AM
i just wrote a shirobako review and then read yours and realized you already said everything i wanted to but better haha.

Vi- Aug 9, 10:38 AM
That is good to know! I think nowadays home office became very strong after the COVID-19 pandemic.
I also did start to work home office starting this March (that was the first time I started to work).
You are planning to buy a gamer laptop? I currently have one (it´s an Avell Fox G1713 Fox). I believe Avell can be only find in Brazil, I think.
The moment you bought your laptop you will be very happy.

I see. Did you watch it via Discord or something with your friend?

I really tried to understand what was happening in the movie, but I just got the overall matter... the details I didnt understand much >.<
You know, that sensation you are watching something, trying to understand what is happening, and when you realize the episode is already ending? LoL That was what happened to me. And by not understanding resulted in less enjoyment =(

I agree with you; I prefer the happy-go-lucky. It always makes my kokoro better and happier.

I just watched Princess Principal Movie 1 and I did see you have watched as well.

Did you understand what happened in that movie? xD
I don´t have a clue of what happened... >.< just that the old man was a Spy... and that he would die at the end (those last minute were ve~~ry predictable >.< )

I am wondering whether the movie was done that confusing on purpose or if I was the one who didn´t get what was happening...

Edocchi Jun 11, 8:25 AM
I know that Key came up with the entire plot ahead of time and just hired Ryu to write the script. I read in Japanese, that's why i can confirm. I actually don't like his prose, it's straight subpar and repetitive. The translation/localization probably fix some of the writing problems but I don't read them anymore. Compared to some of my favorite japanese writers (Maruto, Jackson, Setoguchi), Ryuukishi's prose quality is quite laughable tbh.
*Edit: I thought you're talking about Loopers in those brackets.
Nowadays I've developed a love for the Japanese language itself -which helps and also leads to me exploring contemporary and classic authors in addition to otaku crap-. Unlike English and other languages, a paragraph in Japanese can say so much about the writer's quality. Pretty much the reason why stuff like Umineko and Fatamoru are only big in the west/western fanbase. English readers can't identify the big flaws in those works.
But personally I don't think that prose is quite enough to decide whether a writer is good or not (unless we're talking about Nabokov) which is why I still like Ryuukishi. He has his own strengths too; for one, he may not have a perfectly conjuction and ellipses usage (they are overused to an extent) but his text and vocabulary are regardless of that, very rich.

Sadly 90% of the good eroge that I've read are untranslated. And even the rest 10% got mediocre to shitty translation quality.
I agree that most Japanese writers are pretty garb. But there's also an incredible amount of talent in the industry between writers like the ones I mentioned earlier, all of which I would put on the same level as famous, critically and academically acclaimed novelists.

Edocchi Jun 11, 5:26 AM
Loopers is garbage, honestly. Writing is extremely preachy and repetitive. I can't believe Ryuukishi managed to create something that's worse than Iwaihime.

Ah, that's a shame. I just checked your vn list. You have read quite a lot of titles, but man you say thing like japanese writers are bad yet made no attempt to actually read the good stuff.

Edocchi Jun 9, 5:39 AM
It may be just me not liking Higurashi's cast of characters, I think it gets worse with every chapter. I dropped it at around the middle of question arc, well I had seen the anime (and you know I didn't like it at all). Umineko also had a lot of issues, esp in episode 2 and 4, but there's some good individual moments to make up for the over the place and unnecessary convoluted narration. Still I think the worst Umineko episode is still pretty good. The adult characters in Umineko are very realistic, some of the most well-written I've seen, definitely the aspect where Ryukishi improved the most since Higurashi.
I've been recommending people to just stay away from Higurashi VN as the pacing will easily put them off and it's inconsistent throughout the series. Manga is a fine alternative imo. Compared to the anime, Higurashi manga has a much stronger sense of place, foreshadowing, and thematic approaches.

You might want to check out another Ryuukishi's work, Rose Guns Days. It has the weakness of 07th Expansion with rushed ending that gave off an underwhelming feeling, but looking at it from a bigger picture it's probably the most well-balanced work from Ryuukishi. The mafia unique setting makes it intriguing to read and feels very refreshing at the same time. It dives into some interesting political aspect doubled with an extremely likable cast of characters.

exonerate May 26, 5:55 AM
When I was in my first year in university, I also wanted to switch. I didn't end up doing it, and then I switched after my second year. And I haven't regretted my decision to switch once.

A few months back, one of my friends at this university dropped out to go to a different school. He already knew he didn't like studying physics, but he still kept going because he had passed the first year. Same story as me, basically.

So, in my experience, people usually do end up switching or dropping out when they don't enjoy the place or the mayor. In hindsight, I think it's stupid that I prolonged my suffering for a second year, because I was never going to make it through the four whole years there.

It's disappointing when the university and/or major you have picked for yourself doesn't end up being what you expected from it, and I really doubted whether picking a different university would make a difference at the time. I had already picked the wrong one once, after all. But man, am I glad that I decided to switch. Good luck with such a though decision!!


Bishounen are my favourite topic! I'm currently watching Kabukichou Sherlock, and all the characters look like their heads have been forced in a too-small fridge. The square-shaped heads do take away from the bishounen-factor. The only reason why I still watch this show is because it's genius (please don't take that too seriously, it's horrible, but I have very specific reasons for loving it nevertheless).
Eureka Seven has quite the high rating. It looks like a fun show. Now, if only it features bishounen!!

I have been doing well, which is good. I have also been watching some more anime lately, so I'm no longer showing withdrawal effects from not seeing any bishounen.
I was very busy for the last six or so months, but things have been a little bit better for a couple of weeks now. I managed to fail a hilarious amount of my classes in the latter half of last year, so I had to repeat those on top of the rest.
That's why I took a little break for the past three weeks and have played a lot of minecraft and watched anime. I even watched Black Clover, and am absolutely disappointed by how little screen time Asta and Yuno had together. Usually, when I finish watching a shounen show, I have some nice ships, but this was very though on my inner fujoshi... But I managed to recover by watching some more anime!

Vi- Apr 7, 7:13 PM
Yes. Despite me ending up not enjoying Wonder Egg as many are enjoying, I have to agree that the show is kinda of unique (putting aside some of the issues used - such as, for example, bullying).

I confess, as well, that the sudden gory scenes spoiled my enjoyment (which was just ok-ish at the time). So, the gory scene were like... the key to make me not enjoy Wonder in the end, and ending up giving it a worse score.

I get what you mean. I wonder if they use those fighting scene as a relief factor (the characters beating up their issue); or to make it more enjoyable (or at least an attempt to). Maybe they were thinking that the battle scenes would make things different from the usual - which, in fact, made it kinda of different in a way.

Hahaha, when you finished Wonder Egg, tell me your opinion, if you remember ^^