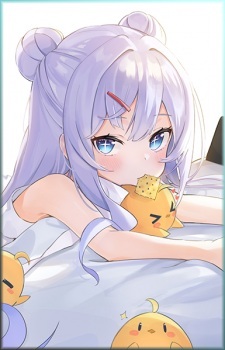 exonerate Jul 18, 2020 12:51 AM
That's absolutely wonderful!! It's amazing that you liked the show, and the best flippant fallen angel in the universe, Azazel!
My knowledge of mythology is close to non-existent, so I never noticed the elements they threw in there, so I'll definitely have to rewatch it (which I'm already looking forward to).

I have been absent for, I believe, four months now. My last term in university was pretty rough with resits and, this term too, I managed to fail a course. Due to the corona-stuff, some of my planned courses were cancelled, so I was following three super-though courses at the same time. But I'm planning to join the group watch on Friday again since my summer break has finally started (although I'm still preparing for a resit).
I totally could have been present yesterday, but I forgot (oops).

By the way, I want a cross-over in which Kanna stars now. That would definitely make me love the show even more.

MAYOIII Aug 8, 2019 9:43 PM
hmm yea mb and true
'submissive' is the better word to describe her
i really do wish she can buff up herself and be more aggressive on making decisions

* yes i did mentioned on discord that i was reading yours
seems like you've enjoyed it to a small degree. i have to admit the world-building is pretty decent in this story
i was totally dumbfounded by the debut of that cannibalistic demon
and interestingly you specifically analyzed each of the characters as well (i'm not really fond of their development actually, and if i have to i would say their development are unnatural and shallow to an extent)
would you agree that characterization is one of the aspects that caused you to deduct points on this show?

lol
actually someone has asked me this question before, i forgot if they've posted this after or before you but it's quite a coincidence...
and yes i have
i can understand why some many guys are attached to the characters... totally...
well.. are you tentacle? :smug:

i feel the philosophical undertone beneath the surface of the story presented, and it reminds me of metal gear solid for some reasons
* and have you played the original nier as well?

i see, you aren't the only one who told me that
and i honestly have no idea what's your scores based on...
i guess you value personal enjoyment the most? you seem pretty casual to me but at the same time fairly analytical

and no really, but i think you might want to give it a try if you're into dark slice of life anime that gives off 'magical girl' vibe
it's a hit or miss imo

MAYOIII Jul 27, 2019 12:45 PM
anything dark and has magical girls as the main cast would be deemed as a madoka rip off by some...
to be fair madoka did somehow paved the way for dark magical girl anime so it's partially understandable

beside her voice, she's indeed a decent character but I don't like the fact that she's too kind to everyone. Eventually it would get her killed unless she came to the realization that not everyone reciprocates and it's justifiable to fight back and punish those who intend to hurt her.

oh the idol? I don't find her appealing as a character though
what's your reason for liking her then? are you into idols or yanderes in particular?

oh boy then we have more to discuss with each other then...
are you reading the promised neverland too?
and do you read dystopian novels too? i mean english ones

sol + psychological just perfect the atmosphere for me and I'm all in for the stories (another one worth mentioning is haibane renmai, i'm sure you've heard of it/seen it)

mahou shoujo as an element isn't that appealing for me, but if it's combined with psychological, i'd say it's twice as more interesting since the cuteness you felt from the mahou shoujo troupe vastly contrasts the vibe you get from the story
* have you seen black rock shooter?

MAYOIII Jul 22, 2019 5:32 AM
oh yeah i do agree with you on your take on its edginess tentacle
if it's toned down, i probably wouldn't find it as appealing as it's supposed to be with the series's dark/mature themes, in way that it actually helps to build up tension and create opportunities for many of the characters' personality to be explored and realized
well, some people say it's a madoka rip off i certainly would disagree with it

i just don't really find the main character [aya] to be that interesting, and i lowkey find her annoying (perhaps its because many of the other outspoken characters have dwarfed her in characterization)

interestingly, you've assigned most of them with relatively high scores

MAYOIII Jul 18, 2019 10:47 PM
btw tentacle how is mahou shoujo site? :eyes:
is it worth a read? well the anime is kinda edgy but i'm ok with it since the story does got a creative concept

MAYOIII Jul 14, 2019 4:12 PM
MAYOI- I(the letter) would be the most appropriate answer
just call me mayo btw, that's how everyone calls me these days
creative enough, you're the first who thought of calling me MAYO the second lol
mad respect for you

Well I have video evidence you're not the first to use that pun on me.

loky14 Feb 4, 2019 2:37 AM
heyy
yes, i watch animes which i think are interesting or has a good story, not because if they are romantic, supernatural …
I'll try to watch the anime you said too
thanks for the recommendation :)

she's an oddly appealing character
she's just emitting elegance whenever she's speaking (i LOVE her seiyuu's voice, though I sometimes confused her with saori hayami)

its kinda cool you got tiger and bunny in your favorites
i've heard of it definitely
looks like something mecha but it doesn't has the tag; guess the characters use power suits then

ohh the promised neverland so far so good, but i'll be resuming reading the manga soon, because the manga is better than the anime but so far so good the show is good and enjoyable nice art nice music and the rest is good.

i noticed some stuff but there not that important.

but still good show but dororo and kakegurui xx i still better for me, so what's your favorite show of this season
All Comments