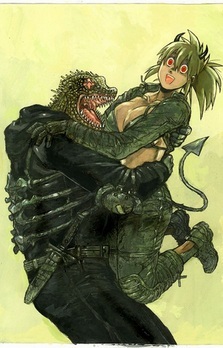 mill444y Sep 8, 3:11 PM
Izaya and his sisters are crazy bastards and thats what makes them great lol.
I also loved Mikado because he looks so sweet and harmless but as you know, he's quite the opposite xD

Can you find it online at all? I would be surprised if theres actually nothing about it being translated.
I've heard of fate but since im aware that its such a long series i'm waiting until i have a lot of time to binge it haha.
I just searched up fate/strange fake and the art looks really cool, ill definitely check it out!

koreyuchiha6 Sep 7, 11:49 PM
Thanks man for the reply and yes i have to agree about the one piece characters there all awesome.

but yeah ill probably read the manga first. thanks (:

Right, some good favs right there!

koreyuchiha6 Sep 6, 8:23 PM
i plan on watching dorehdoro at some point is it good or should i read the manga first? people say the manga is really good with world building and expansive character and plot points.

Ooo how exciting, the last season! Are you enjoying it so far and who's your favourite character?
Thats so disappointing ): It's such a popular series so you'd figure they at least had it translated.

i love one piece

mill444y Sep 6, 3:25 PM
Oh awesome!! Im planning on collecting the light novels towards the end of this year.

Its so cool that you live in Kiev!! I'm Ukranian as well so im planning to visit one day since it looks absolutely beautiful.

krukrooo Sep 1, 4:17 PM
Yep, I also liked Shishigou the most among the new masters introduced in Fate/Apocrypha. Wow, he also appears in Lord El-Melloi Case files? Damn I will really check it out now. I love Waver and Iskandar's dynamic in F/Z and I also like animes with 'mystery' elements within it.

Thank you for the help dude! I really appreciate it :) And yeah watch the Heavens Feel movies. It's a real treat if you want 'darker' more gruesome stuff in the fate series.

krukrooo Sep 1, 5:57 AM
I didn't expected you to recommend me watching the anime first before playing the game lol (FGO: Babylonia). I was also leaning towards that decision and since you did it (and loved it), maybe I'll give the anime first a go, since it will surely make me love the game more!

And yeah, maybe I'll watch it tomorrow asap since the event involving fate/zero characters in FGO is only up until Sep 13. I really don't want to miss that one. Maybe I can still make it lol. And damn that Assassin class - Kiritsugu is dope as hell.

I'm also quite a saber fan myself, that's why I'm planning to watch her route in the future. Kinda sad that the 2006 adaption was an incomplete adaptation :( Maybe I'll try play Realta Nua VN (saber route) if there's no decent adaptation in next few years (God I hope not) .

And about your question. Yes, Heavens Feel is in my opinion the darkest route i've seen by far, especially the second movie. You can't help but feel really really bad for sakura because of what she's gone through.

I can't really say that I liked Fate/Apocrypha a lot but I think the concept for the anime was good. When you think about it , a 7v7 holy grail war is really cool. I just find most of the characters uninteresting (mostly the new masters), but fights are great and the new servants introduced are definitely a plus since they are based from famous historical/mythological figures (which I like a lot). But yeah compared to the main story line its kinda weak, but a decent spinoff nonetheless.

definitely gonna watch all the other spin offs you recommended. kinda sad to see that kara no kyoukai is not as good as I expected it to be, well still gonna check it out. some says that it really starts slow.

I started playing FGO a week ago but decided to pause a little bit. I want to watch the other spinoffs first before engaging in the game. Did you first played the game before watching the anime adaptation? Because that's the reason I put it in onhold (the anime adaptation). I plan on playing the game first. I really need to find time to play lol. I'm kinda new to the whole Nasuverse (less than a month old I think) maybe you can guide me through it.

the things I watched are:

That's about it. Are there other things that I need to watch except from the things you already mentioned? And maybe some tips so I can fully enjoy the whole Fate lore would be great. Tbh I feel overwhelmed in the sheer amount of things I need to do lol. I can't really play VNs since it needs a lot of time to get through. But yeah maybe if its really needed to fully understand things, maybe I can make time for it.