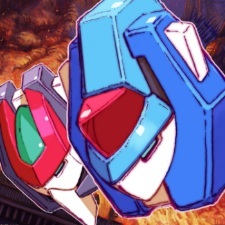 Kyalil Oct 8, 2021 2:51 AM
Dude I tried to watch the first couple of episodes of IBO but as much as I really want to I'm not enjoying it. Please help me when does it get good

Incorporating Hathaway..? Ideally I'd have every UC entry on my page,
but I'd have to shrink the gifs to squeeze 'em all in... I see a challenge
has arisen! 😛

Oh, oh! Did you hear about the second Hathaway installment?! I don't know
if it is confirmed or anything, but apparently it's called "SON OF BRIGHT"
Eeeeeeeeeep! *Excited clapping!* I loooove Bright!

link9us May 22, 2021 8:50 PM
Very nice. Yeah Im more of a fan of mazinger then I am getter robo. I just think all around it was a greater story with a more interesting plot and greater characters. How ever even though I have a love for Mazinger and enjoyed all the adaptations, i still think gatchamon is the crown jewel of early 70's mecha/super sentai and considering it even aired earlier was pretty suprising. It was so ahead of its time in terms of drama and characters with real world logic being used as opposed to classical mecha tropes. You wouldn't see stuff like this until the late 70's with Tadao Nagahama's romance Epic trilogy. The story was also more interesting, the villians were very fleshed out, greater world building, etc. The full trilogy was great and had an amazing ending to the saga. So if you are a fan of early 70's super sentai and mecha shows, check out Gatchamon at some point.

uhh you can say that at least in terms of how iconic it is.

Giant Robo, another classic robot series from as early as the 60’s helmed by the great legendary mangaka Yokoyama Mitsuteru (Tesujin 28, Lost city of Babil, Sally the witch). Who pretty much pioneered the Super Sentei or Robot mecha franchise as well as the maho shoujo (magical girl) franchise. He was massively influential to the medium as a whole and worked closely together with Osamu Tezuka (The japanese god father of anime) and Shotaro ishanamori. (Cyborg 009). These three people were responsible for constructing the very beginnings of the medium and anime may not be what it is today if it wasn’t for these legends.

This is a fully revamped remake for for the modern generation and omg does it show. It is absolutely a breathtaking spectacle of sheer quality and visual effects. This is one of the best representations of Cell animation I have ever seen and considering it was produced in the early 90’s that says something. Honestly, it’s no wonder discotic media licensed this one for the global market’s consumption. Although the productions visuals are amazing, the series it self is best described as almost like a fan-fiction or pure fan service to die hard Mecha fans. It is kind of a mesh of various genre’s with different story point of views and a homage to Yokoyama’s work and style as a mangaka, however if you’re a fan of the authors other works, then you may appreciate it. It is considered his 40-year anniversary project before his untimely death.

link9us May 19, 2021 3:02 PM
So now I have the Film to watch. I am going to actually watch that today. I have heard it’s a major love letter to fans that have alot of familiarity with mazinger and its actually one of the adaptations that follow the original continuity of the franchise. So, looking forward to that.

I guess I could also mention one more thing. The classic Mazinger's may be some what hard to follow because of its typical monster of the week style of story telling and that is mainly what consisted of the majority of those mecha shows, how ever there is away you can still enjoy it by watching only the episodes that progress the story. Which probably ammounts to like 8 or 9 episodes out of the full 54. The cliffhanger ending specifically in the original mazinger is a very iconic moment that has been re-used so many times in the remakes and is also part of the manga.

link9us May 19, 2021 2:53 PM
There is nothing special about Mazinger SKL btw. I just finished that and it really is the most deteached mazinger project I have seen with some silly random story and characters with little to no exposition and the main cast is not even present. Check it out if you want to be a completionist as its only 3 episodes but deffinitly not worth the time. Some of the mecha action is a bit cool looking if your only wanting some what of a visual feast.

Impact on the other hand utitlizes many of Go nagai's original mazinger elements from the manga and classic TV shows that fans will recognize. All well crafting an entirely new more deeply written story that even provides more of a history and background behind the Myceane's. It is quite genious and well directed with even some new characters thrown in the mix. I honestly expected it to be good seeing as its helmed by none other then the veteren Director Yasuhiro Imagawa who is responsible for directing the masterpiece Giant Robo and Mobile Fighter G gundam, but even then I was a bit suprised how it stacked up to every other mazinger adaptation given that most mazingers have pretty classic conventional stories. Of course Giant Robo is probably Imagawa magnum Opus, but Impact was still pretty damn good.

link9us May 16, 2021 11:15 PM
I just got off from watching Mazinger Impact, probably so far the best adaptation from this franchise. All I have left is the Mazinkaiser OVA's and also film and then I have officially finished my Mazinger journey which includes all the classic TV shows, films and cross over's along. In any case the opening music for Impact is probably one of my favorites of any mazinger music I have seen.