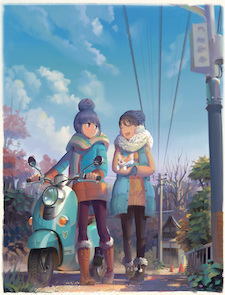 Fleure Feb 1, 2:04 PM
I've been re-reading some non-fiction (history), and finishing up the Gormenghast series. Also about to start a server read of Hesse's Glass Bead Game. It will complete my re-read of his major works, so decided to make it an open thing. Other than that, the usual random studies, essays, etc.

Ride your wave had its charm. I think it was a bit of a mess though, had a lot of things I felt were interjected haphazardly without much cohesiveness, but overall, I enjoyed it overall. How about you, watch anything fun or notable lately?

Serendipity Jan 30, 3:00 PM
Same actually. I like it, but I will be honest I do like Taylor's pop albums more since they're easier listening (like 1989 and the before). I do think her new albums really showcase her songwriting though, which I think has always been a strength of hers since her like casual storytelling style easy to connect with. My favourite songs are champagne problems, tolerate it, long story short, no body no crime, willow, ivy, gold rush, and cowboy like me.

I like how it says mild, but I haven't replied for a few days and since then we got hit by some snow. Actually, I left my car unmoved for a week and sort of had to remove a ton of snow off it earlier this week.

I'm alright, just chilling. I broke my laptop early in December which kind of killed some of my online time (when I visit my parents I have to borrow theirs) which is good/bad I guess. Been trying to keep active with the home gym and social with family/friends. A lot of video games and been rewatching some anime with an IRL friend. Forgot how much I loved FMAB and found a lot more enjoyment with Yuru Camp on rewatch with them. :)

That's great. Those are impossible, haha.

For me, its a bit more or less the same. A lot of reading, attempts at writing, and just trying to find new things to engage myself with. I want to start learning another language and possibly do some volunteering efforts. Let's see.

Serendipity Jan 18, 12:52 AM
She's the MVP. I'm looking forward to her next too, if all the speculation comes through. What did you think of the album? Any favourite songs?

How's the new year treating you? Lockdown isn't all that fun, but at least this season of anime is comfy. :)

Fleure Jan 14, 8:44 AM
I don't know if it does, but comfy anime is all I really care for in anime at this point, lol. At least, what I find myself returning to watch. Though I may give a few other things a try at some point, we'll see.

What's new with you though?

Here things are rougher I think, but in my family we are still going fine. I haven't visited my rl friends in a long while so I miss them, but I guess this is how it is. Being healthy and even now in the middle of what seems like a 3rd wave is quite good news so I don't complain. I am studying a lab course in the meanwhile and finally in the process of getting a driver's license (I'm on practical lessons now and slowly building confidence). My sister is expected to give birth next week, so there's that as well.

I am not expecting to be vaccined any soon since I'm not in any risk group, so maybe in summer.

jal90 Jan 12, 7:13 PM
You know I'm lazy (as seen by the birthday greeting I didn't answer... sorry about that and thank you!), and I'm growing faster than my profile editing skills, please cut me some slack xD

By the way, how are things out there with the virus, Josh? Is it going well for you and your family?

I thought about playing footy sevens but I don't know lol

Yes, it was a good day! Weird getting out though, given how quiet everything has been.

It's decent, but the thing is that it's still inside of my room because I don't have an office. Instead, my work area doubles as my gaming setup and it is hard to separate these things. This is even more the case because I'm not really someone that really particularly enjoys the technical parts of work/academics, rather I enjoy working with people and that's sort of cut off from me right now. Plus that chair is an Ikea chair and I've realized that sitting on it for a few hours is fine, but longer periods of time is not fun. I'm going to probably try and get a more expensive office chair like a Leap or Aeron off of Kijiji or a second hand office store, then put it as a work expense (or have my parents claim it for me).

For Folklore, I need to listen to it a few more times, as I've only gone through it in sequence twice. My favourites so far are the last great american dynasty, august, illicit affairs, mad woman, and my tears ricochet, but I'm not sure how I feel about this album really. Like, I appreciate that it's more mature sounding and different, while retaining a lot of things that characterize her music, like her conversational storybook lyrics, but it also is a bit heavier in lyrics and sound so it isn't as "easy listening" as her old music, which I really appreciated before. I'm not sure where I'd place this, but it definitely is below Fearless through Red era. I might be a bit biased though, as I grew up with her music. It probably is around 1989 for me, but we'll see.

Serendipity Jul 29, 2020 4:10 PM
Thanks! A friend came over and we made another Korean order haha. Also finally got to see my hair stylist, so it was a good day. We ordered out from Sodam, it was better quality than the other places and I was surprised that their price was about the same, as on Skip The Dishes (I think) they have a $$ sign rather than a $ like the others.

I'm okay, productivity at work is really bad right now honestly. I'm pretty tired of the like work from home situation, I miss the social interaction a lot and the general like feel of the office. That said, I appreciate being able to go home and spend time with the family more often. That's been a blessing in disguise for me.

In other news, I built a PC so that kept me occupied for a bit while I smoothed things out, but that seems to be all settled now.