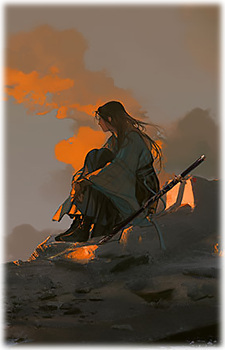 Fario-P Apr 28, 10:55 PM
long time no see, hope you had a good birthday once again!!! no problem!
omg yeah i just finished those 4 eps of yugi vs jounouchi death duel, so zetta good....... i really need to finish this whole series before i say anything but my god... passionate duelist, ending of the battle (you know, the sad flute variant), the dark magician theme (idk why it's called that when it plays at points without that card but...)... boy do i regret not watching/reading any of this sooner even more :'D

Fario-P Jan 15, 9:54 AM
aaaack sorry for late reply again but yeah i guess "a gentle and honest character who tries their very best, with a dash of angst" does describe my taste a bit hahahahaha... i'm gonna put it on-hold for a while now though, watching Duel Monsters Eng subbed rn atm and the music is so zetta good istg why did 4kids ever remove it is beyond me ig... i'll definitely read into those interviews, hearing how passionate he was about his manga touches my heart just as much as the actual manga itself so far ;w;

konkelo Jan 8, 5:44 AM
Screw dakimakura I need and want that pillow. I can bring music to the party. Weird shit nurtures the soul and keeps you young lol
Thanks, same goes to your favs. Oscar best waifu and husbando no question.

Hahahaha yeah... I heard Oofuri had a loveable main character and I've never seen sports anime before, so why not? I'll let you know what I think of it when I finish the first season! ​And as for Yu☆Gi☆Oh, well... this thread I made should say it all for me lol (please feel free to reply in it, would love to see your post!!)
https://myanimelist.net/forum/?topicid=1978318
I hate that I can't buy the manga atm though, hope Viz reprints the 3-in-1s soon TTmT

Honestly I don't know or have any idea about dream teams exactly atm. Now that I've read quite the amount of the latter recently, I think your idea of a hybrid between Shugo Chara! and Kamikaze Kaitou Jeanne would really be something else. And I mean that in a good way! I also agree that if I were making magical girl series, I would like to make something that aims at that solid middle ground you described. Though I wouldn't making sugary-sweet and pitch-black-dark stories either hahahaha, what can I say, I'm just a magical girl enthusiast who enjoys nearly all kinds XD

Oh and I'm sure you noticed either by my list or one of my recent posts but... I got into Yu☆Gi☆Oh lately. I hate myself for not watching/reading it sooner lol

ohh i saw that one when the cover went viral a few months ago! i love lighthearted, chill stuff, so maybe i can start it, thanks for the recc!~


yeah learning Japanese would be the best way lol. You can find Japanese manga for dirt cheap on the internet. But then again I'm so lazy :/ It would be so much easier for me to collect manga if I was willing to accept german manga. But for some reason, I refuse to read or watch anything in german, be it tv shows, movies, anime, or manga.

I'm always thriving to improve my English and I guess I'm just kind of infatuated with the language. + I just don't like how they sometimes translate the context into german, it oftentimes feels so silly.

If you don't mind me asking, do you live in France? But you don't speak the language? Because you mentioned that you need to learn French or Japanese. Or is it because French manga is way ahead of other countries when it comes to manga? I'm fairly new to the manga scene so I'm not really sure if that is the case. I just heard that for example, Jojo was apparently already at part7 in France when it was still stuck at part4 in all other countries. That's so weird.

You said that it's been a while since you've read physical manga, any reason for that? More into the convenience of digital lately?

gokalp Aug 11, 2021 10:13 AM
hi! you're welcome~
thank you sm for the compliments! i'm glad you like it <3 yours is also so cool and beautiful!
haha i definitely recommend it! it's the best boys' love manga out there in my opinion :)

Luculo Apr 20, 2021 9:07 PM
Thank you Comrade for accepting my invitation among all the others in this immensity of fragments *-*

Icy26 Apr 7, 2021 6:43 AM
I saw your comment on "Which fillers are worth watching" for detective conan, that guide really helps, big thank bro (nice pf btw)

Nozdref Oct 15, 2020 12:30 PM
Ahh I see. I'm slow watcher by default too, but I still like it this way lol. I don't think my PtW will ever be completed though lmao. What exactly is AWC anyways? Like, there's a certain amount of anime you have to watch throughout the year?

Hmm make a post pretty how? xD
All Comments