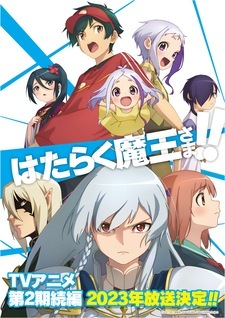 The 12th and final episode of Hataraku Maou-sama!'s (The Devil is a Part-Timer!) second season announced on Thursday that an anime sequel is in production. The official Twitter also revealed a key visual (pictured). The anime is scheduled to premiere in 2023.

The anime adapts Satoshi Wagahara's fantasy light novel, which originally began as a novel submission under the title Maoujou wa Rokujou Hitoma! (The Devil's Castle within a Six-tatami Room!) for the 17th Dengeki Taisho awards in November 2010 and won the Silver Prize along with Antiliteral no Arcanist. Dengeki Bunko began publishing the novel featuring illustrations by 029 (Kuma Kuma Kuma Bear) the following February and shipped the 21st and final volume on August 2020. Hataraku Maou-sama! has over 3.5 million cumulative copies of its volumes in circulation.

Yen Press licensed both the light novel and manga adaptation in English in August 2014. The 21st light novel volume went on sale on April 19. The 18th manga volume was released on May 24, with the 19th volume scheduled to be released on November 22.

Synopsis
In the world of Ente Isla, the Demon Lord Satan has attempted to conquer humanity using an enormous army of demons. But when he almost succeeds, mankind's champion, Hero Emilia, thwarts his plans, forcing him to retreat into a portal that leads to a world unbeknownst to him—Earth.

Along with his faithful servant Alsiel, Satan stumbles upon the modern-day city of Tokyo without any knowledge of the world itself. Completely out of their depth, they gain some information from a police officer, but Satan still has one more problem—money. In order to survive with his greatly diminished powers, he guises himself as a human named Sadao Maou, lives in an apartment, and becomes a part-timer at the fast food restaurant MgRonald's. Determined not only to conquer Ente Isla but also Earth, Sadao strives to become a full-time employee in his job, as he believes that it would be a step forward in his conquests.

Things begin looking up for the once all-powerful demon as he ventures through his everyday life—his job, his home, and his relationships. However, a major setback pops up when Emilia, the hero who drove him out of Ente Isla, suddenly appears... [Written by MAL Rewrite]

LoveScope said:
Kinda weird how much HEAT this guy got for Maou's ending yet here they are giving him more adaptations.


Not at all, He wrote like 3 other titles and none of it has gained any traction.
Also considering the quality of s2 compared to S1, the anime has lesser budget to work with (for reasons unknown).

For people still following this series, good luck and have fun. Although there's fewer now, I hope that's enough to support the author cause he's not having the best time right now with his latest series(that's what happens when you pull an uno reverse card after all those volumes written in your most popular title).

We can mock all those whiner fans as much as we want, but now that they left, hello mr. satoshi. I hope you can make a recover :P Good luck selling more of your books, cause I sure as hell won't be buying any. >:D

I was just glad that it got a Season 2. Was one of those who watched the series back in 2015 but still didn't read the LN.

After 8 years when I lost all hope, it got season 2 and now S3 back to back daamn boy,,,, and what's best the author finally lets my girl win. I lost most of the time with the writers. Most of the girls who got rejected were my choosing. But this time she won 😆.

You know the famous meme? 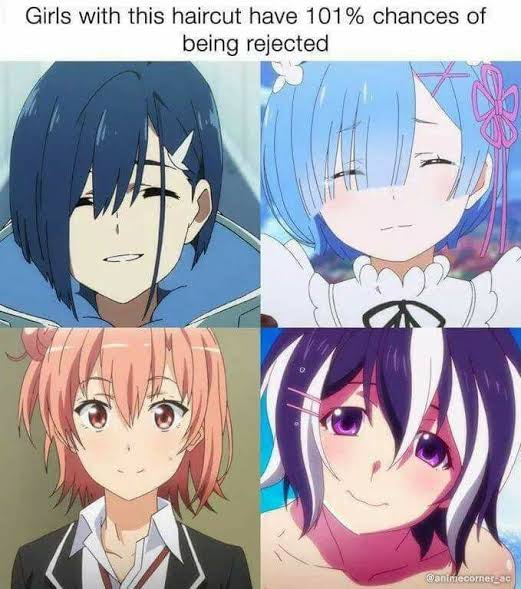 Never watched nor read this. I do however know how this ended and the MC ended up with and seeing as how I prefer girls like her over the FMC, I'm glad she won.

Kinda weird how much HEAT this guy got for Maou's ending yet here they are giving him more adaptations.

Anyway, here’s to hoping for a better adaption.

If anything, they will now adapt all the LNs, and I wont have to read the LN to see the shitty ending it got, saving me tons of time.

Ah, that's a good way to look at it.
Gotta have to try to find some positivity in everything, if possible, my dude. xD

Playcool said:
_MushiRock11_ said:
How happy I was when Season 2 was announced…

Anyway, here’s to hoping for a better adaption.

If anything, they will now adapt all the LNs, and I wont have to read the LN to see the shitty ending it got, saving me tons of time.

@Playcool I respect the mindset, lol.

_MushiRock11_ said:
How happy I was when Season 2 was announced…

Anyway, here’s to hoping for a better adaption.
If anything, they will now adapt all the LNs, and I wont have to read the LN to see the shitty ending it got, saving me tons of time.

What about A3? Black Fox? Healer Girl? Heaven's Method? Rifle is Beautiful and a goddamn SAO?

But sure, stare at the stopped clock.
Every studio has its duds lmao. Idk why people keep forgetting or denying that 3Hz had their good anime, I only see slander these days when that studio is brought up like they've never done anything good.

Frankly, in the case of Hataraku Maou-sama its problem is mostly that the director just sucks at his job (as expected from the director of a generic isekai (Isekai Cheat Magician) everyone forgot as his only directing job). You give that studio an actual good staff and they can do wonder as they've shown in the past.

Season 3 has best cour story and hope it will be adapted better.

What about A3? Black Fox? Healer Girl? Heaven's Method? Rifle is Beautiful and a goddamn SAO?

But sure, stare at the stopped clock.

I enjoyed season 2 so I'll watch this.

do you guys really want to see one of most poorly received LN ending in recent years? who even ask this?

So 1 season closer to that pitiful ending...

Please let Chiho marry Satan and become the Queen of the Demon Realm!

But as long as she continues to appear in too-tight clothing I will continue to swallow my pride and watch this sub-par sequel. Just keep saying, 'there are worse things on television...'