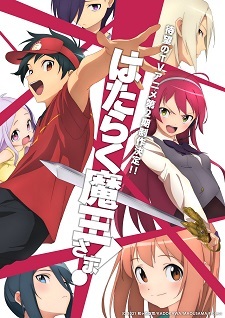 The Light Novel Expo event announced a second anime season for Satoshi Wagahara's Hataraku Maou-sama! (The Devil Is a Part-Timer!) light novel on Saturday. The voice cast from the first season will reprise their roles.

Synopsis
In the world of Ente Isla, the Demon Lord Satan has attempted to conquer humanity using an enormous army of demons. But when he almost succeeds, mankind's champion, Hero Emilia, thwarts his plans, forcing him to retreat into a portal that leads to a world unbeknownst to him—Earth.

Along with his faithful servant Alsiel, Satan stumbles upon the modern-day city of Tokyo without any knowledge of the world itself. Completely out of their depth, they gain some information from a police officer, but Satan still has one more problem—money. In order to survive with his greatly diminished powers, he guises himself as a human named Sadao Maou, lives in an apartment, and becomes a part-timer at the fast food restaurant MgRonald's. Determined not only to conquer Ente Isla but also Earth, Sadao strives to become a full-time employee in his job, as he believes that it would be a step forward in his conquests.

Things begin looking up for the once all-powerful demon as he ventures through his everyday life—his job, his home, and his relationships. However, a major setback pops up when Emilia, the hero who drove him out of Ente Isla, suddenly appears... [Written by MAL Rewrite]

Wagahara originally submitted the comedy fantasy novel under the title Maoujou wa Rokujou Hitoma! (The Devil's Castle within a Six-tatami Room!) at the 17th Dengeki Taisho awards in November 2010 and won the Silver Prize along with Antiliteral no Arcanist. Dengeki Bunko began publishing the novel featuring illustrations by 029 (Inou-Battle wa Nichijou-kei no Naka de) the following February and shipped the 21st and final volume on August 7 last year. Hataraku Maou-sama! has a cumulative 3 million copies of its volumes in circulation.

Akio Hiragi began drawing a manga adaptation in Dengeki Daioh in December 2011, which has 16 volumes in print as of on March 10. Kurone Mishima (Kono Subarashii Sekai ni Shukufuku wo!) serialized the Hataraku Maou-sama! High School! spin-off in Dengeki Maoh from May 2012 to February 2015.

White Fox produced the 13-episode first television anime in Spring 2013, covering the first two volumes. Funimation simulcast the show with subtitles and released it on Blu-ray in July 2014.

Yen Press licensed both the light novel and manga adaptation in English in August 2014 and released the 16th manga volume and 18th light novel volume on December 15 last year. The company also published the high school spin-off manga between August 2015 and October 2016.

Wagahara and 029 published a spin-off volume titled Hataraku Maou-sama no Meshi! in February 2019. Uoji Sada launched a manga adaptation based on the volume on Kadokawa's ComicWalker website in August that year. The third volume will go on sale on March 27.

YOOOO ITs about time! almost 10 years later. LETS GOOOOO! ^<^ This was one of a number of 12 ep good anime that always deserved a sequel season. ^<^

I'm hyped for this, like, I never saw this news coming at all. ( https://evergreenapk.com/ )

Sorta worried since the production staff is completely different and the director doesn't look too great...

hopefully the budget is plenty because it's a fun ride for this one.

I'm so glad! I totally gave up hope but there truly is meaning to life, the anime industry has taught me that again.
mobdro apk

@_Ako_ I don't expect much as I've lost all interest, trust and hope. But if it does change the mistake of LN, I'll maybe think about watching 2nd season. I mean, if not, why would I watch only to get disappointed once again...

yezza... cant wait to watch it

I read some bits of the third volume and it was extremelly enjoyable. I can't wait to see it animated

Let’s Goooo I loved the first season, I can’t wait for season 2 :)

I hope the original animation in the second season won't be butchered though. Still thankful this is getting a second season!

You're just lying right??? This is probably one of the april fools joke

Season 1 was nice ! was hopeful for a season 2 but didn't think it would actually come , excited for season 2 ! looks like it will be pretty fun from the trailer

OMG!!! I thought I'd never see the continuation of this series.

Honestly I still can't believe they are doing a 2nd season 9 years later, this is very cool.

I'm sorry i think I'm in dumbstruck with this news... Or maybe just dumb. So anyone can tell me WHEN this second season will be aired?

I hope Nisekoi season 3 too