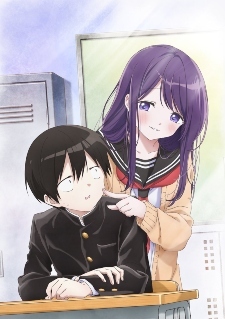 Publisher Kadokawa opened an official website for a television anime adaptation of Nene Yukimori's Kubo-san wa Mob wo Yurusanai (Kubo Won't Let Me Be Invisible) manga on Friday and revealed the main staff, cast, and a teaser visual (pictured).

Kana Hanazawa (5-toubun no Hanayome) and Kengo Kawanishi (3-gatsu no Lion) are starring as Nagisa Kubo and Junta Shiraishi, respectively.

VIZ Media licensed the manga in English on October 9 and released the first volume on May 3, with the second volume scheduled to ship on July 5. The series is also simulpublished in English and Spanish on the Manga Plus and VIZ Media's Shonen Jump website.

Synopsis
High school student Junta Shiraishi has a simple goal—to live a fulfilling youth. However, achieving this goal appears to be harder than expected, as everyone in his surroundings often fails to notice him due to his lack of presence. In fact, Shiraishi's lack of presence is so severe that people think his seat in class is always empty, and mistakenly assume that he often skips school. There is even a weird rumor spreading around in class, claiming that those who successfully spot Shiraishi will be blessed with good fortune for the day.

So far, the only person who notices his existence is Nagisa Kubo, the girl seated next to him. Unfortunately for him though, Kubo likes to tease him on a daily basis and often puts him into unprecedented and nerve-wracking situations. However, as Kubo's playful antics continue to involve the reluctant Shiraishi, he may soon discover that his youth might not be as boring as he initially thought. [Written by MAL Rewrite]

That title shows up a lot in... that site.
Main girl voiced by Kana, may have to watch this.

The Manga is wholesome, so happy the Manga is getting an Anime plus Kana Hanazawa is perfect for Nagisa Kubo 😍

Well well, finally the day has come with Kubo getting an anime adaptation.

HanaKana is back being a main female MC, and Kubo's character is SOOO gonna fit her character well, I'm just awaiting and anticipating with high expectations.

O_T_T said:
This is the same soft-dom-fetish garbage as the forehead child show. Repetitive, generic, pass.
Ah someone already deciding that is trash without actually watching the show, i guess you never heard the saying, don't judge a book by its cover.

After reading synopsis i think the story is heavily influenced by "teasing master takagi-san ".

Let's go! This'll be my first adaptation for a manga I'm already reading and it was literally two days ago when I thought that it should definitely get an adaptation.

ain't no way, most of the manga that i read now have anime adaptation, so happy bout it!

oshi no ko when

Finally this got an adaption ive been waiting for this for quite a while, this is some truly good news.

Let’s go i’ve only read a bit quite a while ago but I remember that it was super wholesome.

The synopsis is kinda misleading tbh there’s not a ton of teasing past the first couple chapters of the manga. Sweet story, great read.

Is this really happening? I never saw this coming. I’m so happy. Let’s goooooo

I legit thought this was Mob Psycho at first. Premise seems good so I’m still gonna check it out.

Boku no Kokoro no Yabai Yatsu anime when?

Hanazawa Kana voicing the main isn't something we see very often nowadays, so good thing this adaptation is coming.