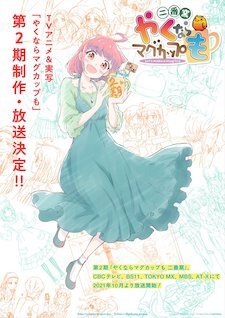 The 12th and final episode of Yakunara Mug Cup mo (Let's Make a Mug Too) announced a second season following its broadcast on Monday. The second season, subtitled Niban Kama (Second Kiln), is scheduled to premiere this October on CBC TV, BS11, Tokyo MX, MBS, and AT-X. The official website revealed a visual to commemorate the announcement (pictured right).

The Yakunara Mug Cup mo project was launched in Tajimi City in 2010 by a team of local businesses in an attempt to stimulate the local economy. The project has been published quarterly and distributed for free since 2012 with the 33rd volume being released on May 26. Planet Co., Ltd., a Tajimi City-based IT company, is currently publishing the manga with support from the local community. All volumes are available digitally on the manga's official website.

The first season began airing on April 3. Crunchyroll simulcast the anime with subtitles as it aired in Japan.

I haven't gotten around to watching this yet but I'm always happy when a niche SoL anime gets a sequel.

RobertBobert said:
Is this a full-fledged second season or is it still a split cour?
It's the same format is the recently ended season. Both anime and live-action.

But still this is surprising to get a Season 2, for mainly the educational content.

Is this a full-fledged second season or is it still a split cour?

The first season was a nice short anime, so glad it gets a second season in just a few months away. Need more relaxing anime shows these days.

I'm glad this got a second season cause I got the urge to watch more of this anime after watching the finale.

Didn’t watch it, but I always appreciate it when anime with smaller fanbases get sequels.

That's not one of the currently airing shows I expected to see a sequel to. But it's definitely some welcome news, I'm looking forward to more cute girls doing pottery. And on top of that, it's not even that far in the future.

This is great news, can't wait for it

Nice! I really looking forward to the next season.

There were so many anime better than this in the current season that deserve a sequel more than it, so I’m surprised.

I’m actually so glad to see this get a sequel, genuinely was one of my favorite shows from this season