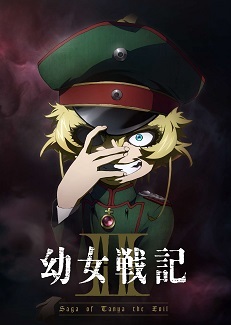 The Seikan Kinen Zadan-kai: Gekitou wo Furikaette (Survivor Memorial Roundtable: Reliving the Fierce Battle) special program for Youjo Senki (Saga of Tanya the Evil) on AbemaTV announced a second season for the anime series on Saturday. The program also revealed a teaser visual (pictured) and announcement promo. Lead staff and cast members will reprise their roles in the new season.

Chika Toujou began drawing a manga adaptation in Monthly Comp Ace in April 2016. Kadokawa released the 21st volume on May 26.

A 12-episode television anime by animation studio Nut aired in Winter 2017. Crunchyroll and Funimation streamed the show with subtitles and English dub, respectively. A sequel anime film opened in Japan in February 2019, grossing over 420 million yen (approximately US$ 3.8 million).

Yen Press licensed both the light novel and manga adaptation in English in April 2017 and published the eighth light novel volume on December 22 last year and 14th manga volume on June 8.

Your wish is my command 😁

SebCyrSC2000 said:
Playcool said:
Kinda lit to see more of this, even thought I still have to see the movie.
I enjoyed S1 best as something I could watch whenever I wanted, and it was a blast to go through, along with some popcorns.

I m probably going to wait till all of S2 is out and then watch the movie and S2 afterwards.

Please tell me Konosuba is next...

An official announced to Rezero S3 has yet to come out, you gotta chill, hopefully it will happen, but you can only believe when you get it official.

I was talking about S2 of Re:Zero.

I went into watching the movie with no real knowledge of what content was covered in it (other than it wasn't simply a compilation of season 1's story). After finishing it, I got a pit in my stomach realizing that we were probably not going to get another season.... Log into MAL to update my list about 60 minutes later...... Bam! The news of another season shows up.

Long story short, it's great content that would probably just get you more excited for season 2 if you watched it a week or so before starting the binge session.

Kadokawa is desperately trying to capitalize on his works that have had some success: Overlord, Youjo Senki, Shield Hero, SAO, among others.

Apparently, they are feeling the brunt of the success of Shueisha's source material adaptations.

Schwarzenn said:
While I disliked the fact that the character had to be so stupidly young, I feel her body would break from much of what she goes through, and of course the reason behind that being, well Japan, always makes me uncomfortable, beyond that I really had fun with the show, a non entirely stupid war anime is something I crave for so I'm eagerly looking for a second season.

I think it's just another parallel with kids being seen as innocent which is another trial she's (previously he) being put through. She (previously he) faces it non stop through the series. On top of that there's no hint yet to why Being X chose to put him in a female body. The whole mystery about Being X's methods is a drawing point to the series. Without the series's magical lore elements, I'd easily agree that her age would be more difficult to swallow. Going to stop there as this isn't so much a s1 discussion thread.

While I disliked the fact that the character had to be so stupidly young, I feel her body would break from much of what she goes through, and of course the reason behind that being, well Japan, always makes me uncomfortable, beyond that I really had fun with the show, a non entirely stupid war anime is something I crave for so I'm eagerly looking for a second season.

I don't know what made me started watching this anime when it first aired, but I sure am glad to be part of the crowd that's hype for this season.

We're all excited. I had to memorialize a little of it.

lemme know if you want to be removed.

(I can't get enough of that music track.)

I enjoyed the first season. Tanya was extremely brutal. But not towards Viktoriya. I like the Yuri vibes between them. Who knows. Maybe when they are done fighting they will have their lesbian wedding,,,,YEEEEEEEEEEEEEEEEEEEEEEEEEES

That would be an awesome ending Nice, this is totally unexpected for me. But the first season was way more enjoyable than I thought, so I'm hyped.

I really can't wait for this. I really enjoyed the first season and was really wondering when we would get another season after the movie happened. Fair to say i'll be on this as soon as episode one is out.

I've been looking forward for this news finally I can now rejoice...

Good shit! I'm not necessarily hyped, but I'm happy. One of the very few tolerable Isekai anime around is coming back.

More of my favorite nazi loli is always welcome. Didn't expect the series to get a second season at all.

Yes, finally! They teased they wanted to make second season, but that feels like ages ago.

I don't exactly remember why or what happens at the end of the movie, but I had the distinctive feeling it had wrapped up the series nicely, it had a conclusive ending. So, I figured that was the ending of the adaptations at least. Well, anyways, I'm glad to have been proven wrong and I'm looking forward to more of this franchise.