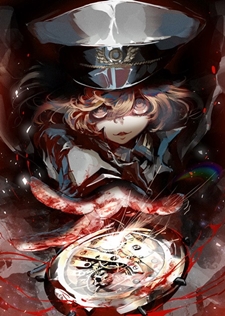 At the end of the rebroadcast of Youjo Senki's second episode on Tuesday, it was announced that the series will receive an anime film following the events of the TV series. More information about the new project will be announced at a later date.

Produced by studio NUT, the anime was broadcast for 12 episodes in Winter 2017. Crunchyroll simulcast the anime as it aired in Japan, and Funimation simultaneously streamed the series with an English dub.

Written by Carlo Zen with illustrations by Shinobu Shinotsuki, the military novel of the same title has been published by Enterbrain since October 2013. The series has eight volumes in print, with the ninth volume to be shipped on January 12. Chika Toujou is drawing the novel's manga adaptation, which has been serialized in Comp Ace magazine since April 2016. Kadokawa published the seventh compiled volume of the manga in November 2017.

Yen Press has licensed both the novel and the manga in English. The novel's first volume was published on December 19 last year, while the first volume of the manga is scheduled to be released this quarter.

I need to finish but glad Studio NUT got a success right out of the gate. Want to see more from them.

I wish we get a sequel after this movie..

Oh fuck yes. Love Tanya's crazy ass this will hopefully be good lol. Season 2 would have been nice but this will do

A Youjo Senki Movie, huh? It'll be great to see my "nazi loli" again, but I'm a bit concern, there will be a second season AFTER this movie? I hope yes.

No second season? This anime was truly an oasis in the desert, given that 90% of anime produced these days seems to be schoolgirl moe-extreme crap. I really hope the movie is not the end for Tanya...

I'm happy to get more Youjo Senki, but movie is a bit meh. Not only it's shorter than TV anime, but also takes far longer to get subbed.

Hoping this movie will lead to a second season.

Yay, i love this anime so much! Can't wait to see!

How about you NUT MTFKs unf*cked the art style first, those expression couldn't even give me the chill when I read the manga

Neat, as overrated as the series is.

It's about time the gap left by that cliffhanger of the TV anime would be filled. Sincerest thanks, Studio NUT.

A showdown between two merciless sociopaths with a wielder of God X..

Since two 2hrs is quite enough to fit in this movie

HELL YES YES YEEEEES!!! Loved this show! So ****ing hyped for this! Hope they do it well!

Well, the hell has returned
Time to make like the MC and defile this monolith again

That was a good news.