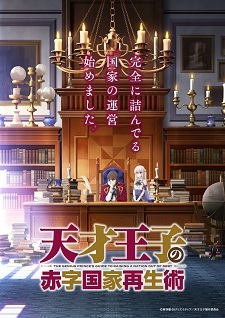 Voice actor Souma Saitou (Yuukoku no Moriarty) is starring as the protagonist Wein.

Synopsis
It ain't easy being a genius...

Prince Wein is ready to commit treason. And who can blame him? Faced with the impossible task of ruling his pathetic little kingdom, this poor guy just can't catch a break! But with his brilliant idea of auctioning off his country, this lazy prince should be able to retire once and for all. Or that was the plan...until his treasonous schemes lead to disastrous consequences-namely, accidental victories and the favor of his people! (Source: Yen Press)

Toba began writing the comedy fantasy light novel under the GA Bunko label in May 2018, featuring illustrations by Fal Maro. SB Creative published the eighth volume on November 12. The light novel reached a cumulative circulation of 250,000 copies with the release of the sixth volume on February 14.

Yen Press licensed the light novel in English last February and released the first volume in September that year. The fifth volume shipped on December 15.

wow just how, how is this getting adapted

I hear in this LN there's romance between the genius prince and his faithful "commoner" ally/subject. Is that true? If so, why didn't they add the romance tag since it's included in the LN?

Too anxious to watch this anime.

English LN reader here. There's 2-3 love interests that have appeared so far (five volumes translated as of December 2020, though I haven't read the fifth one yet). The romance stuff is barely present and is basically background fluff at this point in the story, though there are rare moments where the girls' feelings for the MC are either briefly touched on or are part of a comedic moment. The plot and the comedy are the main focuses of the story.

Looks interesting, Is this harem?

Liked the manga, the MC is funny af at times, glad to see an adaptation

Can't wait for someone down in the comment calling this isekai and that they're sick of them, even though this is just normal fantasy lol.

It's honestly funny seeing the anime industry's attention focusing on fantasy light novel adaptations, then seeing people get really upset about it.

I am guessing this will suck but it will be a good laugh, directly and indirectly. Will watch this.

Wait this is a comedy anime? Still interesting thou.

Finally the adaptation of one of the LNs I really enjoy. I hope they don't rush the anime now