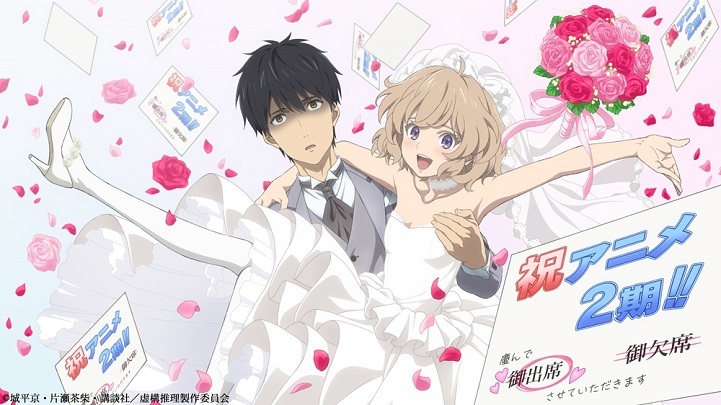 The official website of the Kyokou Suiri (In/Spectre) television anime announced a second season on Friday. The website revealed an announcement promo. 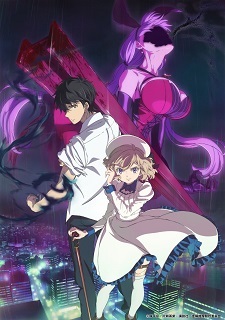 The television anime produced by Brain's Base aired in 12 episodes this Winter. Crunchyroll simulcast the anime with subtitles as it aired in Japan.

Shirodaira published the original Kyokou Suiri novel in May 2011. Kodansha began republishing the novel through its Kodansha Taiga imprint on January 23. The third and latest volume shipped last June.

Synopsis
At the young age of 11, Kotoko Iwanaga was abducted by youkai for two weeks and asked to become their "God of Wisdom," a mediator between the spirit and human worlds, to which the girl quickly agreed but at the cost of her right eye and left leg. Now, six years later, whenever youkai wish for their problems to be solved, they make their way to Kotoko for consultation.

Meanwhile, Kurou Sakuragawa, a 22-year-old university student, has just broken up with his girlfriend after he fled alone when the two encountered a kappa. Seeing this as her chance to become closer with him, Kotoko immediately makes her move, hoping to get married to Kurou one day. However, she quickly realizes there is something more to Kurou. With this knowledge, she asks for his help in solving the various issues presented by the supernatural, all the while wishing her newfound partner will eventually reciprocate her feelings. [Written by MAL Rewrite]

long live a second season you'll have to see the first, but it's worth it

I didn't think that the first season was that bad. Might have to find the time to watch it when it comes out.

I am so happy we are getting a second season, I absolutely love the manga and Kotoko Iwanaga is the best

One of the worst anime couples I've seen, his face in the pic tells it all. Crap like this always gets popular while so many good anime out there that still don't have a second season.

The first season started out so well and then became a pile of trash. Nothing was fun beyond the chemistry between the characters. Would have been better if it had been a slice of life rather than a mystery shounen. Not gonna watch.

the villain better be a sexy girl again

I actually liked the first season so I'm happy with this. I gotta say I didn't expect it to be continued.

now can Hanako kun also get a second season pls

Hype mode activated. Especially since I'm one the people that really loved this series

Nezuko chan with mamo chan, instead with zenitsu va

Likely the only Crunchyroll sequel I’m actually highly anticipating, cause ToG and GoHS were almost practically worthless beyond good soundtracks, and Noblesse is a snooze fest right now.

Cool! I'd love to see Iwanaga again. I loved the visuals and character designs of the anime and even though this detective stuff isn't really my thing, the episodes didn't feel tedious to me somehow. But I'm more excited to see the characters than the story tbh

more Kotoko is a good thing, but the show is much better with the short arcs

scineram said:
Genoard said:
And thus the bore-fest continues. Kotoko is qt though. Hope she gets boned by senpai this time around.

She has been already?

MahiaErebeaNegi said:
Cocoa_Hoto said:
more Saki
You're setting yourself on the disappointment since she won't appear again (Not even a single cameo) after Nanase arc lol. Also, the contents Season 2 will cover is more akin to the first three episodes (Short stories) so it won't have any longer arcs like Nanase arc did.
Oh okay, I'll try and see how the second season will go.

Cocoa_Hoto said:
more Saki
You're setting yourself on the disappointment since she won't appear again (Not even a single cameo) after Nanase arc lol. Also, the contents Season 2 will cover is more akin to the first three episodes (Short stories) so it won't have any longer arcs like Nanase arc did.

Since the first season focus a lot on Nanase Karin arc. Looks like we're about to enter a new arc.

Lets go~! Loved the first season, and never thought it'd get a sequel...

This is one of those shows that I wanted to like a lot more than I did in the end, but its presentation and abysmal pacing for the Nanase arc really dragged it down. Maybe it gets better after that point, but I'm not sure I'm overly eager to see it.

Maybe it'll be something I give it a look once it finishes airing (whenever that ends up being) provided it actually sounds like it's improved.

Really tells you about how easy it has become to get continuations when a show like *this* got one.