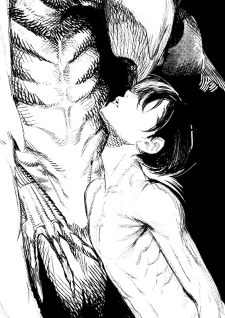 The secondary Twitter account of manga artist Sui Ishida announced on Monday that he is working on a new manga titled Choujin X (Superhuman X). Ishida also revealed an image (pictured), stating that he will work on it at his own pace.

Ishida is well known for creating the supernatural battle action manga Tokyo Ghoul, which ran from September 2011 to September 2014 in Young Jump. The manga ranked 12th in the 2015 Kono Manga ga Sugoi! rankings in the male readers category. In 2014, it became the fourth best-selling manga in Japan with nearly 7 millions copies sold.

He followed up with a sequel titled Tokyo Ghoul:re in the same magazine and serialized it between October 2014 and July 2018. The manga was the tenth best-selling manga in Japan in 2015 with an estimated 3.7 millions copies sold. VIZ Media licensed and published both manga in English.

Funimation licensed the anime series in North America for streaming and home video sales. The company streamed the anime seasons with subtitles as they aired in Japan and subsequently released an English dub.

I saw the Tokyo Ghoul anime and was relatively disappointed with it, the quality of the anime was poor. The atmosphere and animation are of course right, as is the music.

Reading the manga at the moment and am impressed, the manga is completely different from the anime, has a much better atmosphere and is very detailed.

Finally something to look forward to

Really happy to see he is back, and continue his career as mangaka.

He was too stressed and felt under pressure back then :/ and I hope the break helped him recover and he won't feel the same way again.

Do it in your own pace and enjoy yourself Ishida !

the dude vibin kinda looks like levi not gonna lie

Is that better than tokyo ghoul, i hope it so

I look forward to.

Looking forward to it! Can't wait to see what it will be about.

hype. I need to get reading TG though.

It's great to see him back! I'm mad hype for this series.

Meh. Not a fan of the tg manga
so skip for me.

Now this is big news he's a great mangaka can't wait for this series.

He's doing it at his own pace which probably due to weekly Young jump , so he Doesn't feel pressured doing it weekly maybe ?

HELL YEAH, glad to see sui ishida back to working on more mangas, hoping to see more of his amazing artwork and story in the new series, if this ever gets an anime i wish studio pierrot doesnt butcher it like how they did with tokyo ghoul

This announcement has made me really happy. But putting that aside for a second, could we just appreciate the fact that Sui Ishida has decided to continue their mangaka career instead of retiring, even after growing tired of their job and losing their passion for being a manga author and artist, which directly caused the quality drop after the first half of the Tokyo Ghoul:re manga.

I look forward to further announcements regarding the release date for this new manga, and more importantly, I look forward to reading Choujin X when the first chapter gets released. Welcome back to the manga world Sui Ishida!