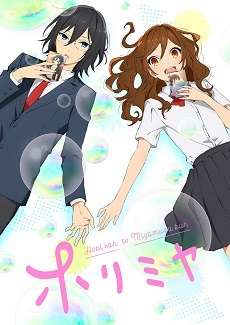 Synopsis
Although admired at school for her amiability and academic prowess, high school student Kyouko Hori has been hiding another side of her. With her parents often away from home due to work, Hori has to look after her younger brother and do the housework, leaving no chance to socialize away from school.

Meanwhile, Izumi Miyamura is seen as a brooding, glasses-wearing otaku. However, in reality, he is a gentle person inept at studying. Furthermore, he has nine piercings hidden behind his long hair and a tattoo along his back and left shoulder.

By sheer chance, Hori and Miyamura cross paths outside of school—neither looking as the other expects. These seemingly polar opposites become friends, sharing with each other a side they have never shown to anyone else. [Written by MAL Rewrite]

Hagiwara began drawing Horimiya based on HERO's original 4-koma romantic comedy manga in GFantasy in October 2011, retelling the original story in standard manga format with an updated art style. Square Enix published the 15th volume on Wednesday. Yen Press licensed the manga in English in March 2015 and shipped the 14th volume on July 21. The manga has also been published in multiple foreign languages, including Spanish, Polish, and Indonesian. Horimiya has a cumulative 5.7 million copies of its volumes in circulation.

HERO launched the original manga on her official website Dokkai Ahen in February 2007. Square Enix acquired the series for official release the following year and published the tenth and final volume in December 2011. HERO subsequently continued the manga with side stories and irregularly posts them on the website. Square Enix compiles the chapters for physical publication through its Gangan Comics Online imprint and released the 14th volume on Wednesday.

Hoods Entertainment adapted the original manga into two original video anime episodes in September 2012 and March 2014. The third episode was produced in March 2015 by independent studio Marone, established by the anime's general producer Tarou Yamada. The fourth and latest episode by Gonzo was released in December 2018.

I'm really glad they make this new series...
however I kinda not happy they change the old voice actor(VA)
I really like the old cast(OVA Ver.) yeaa i know the art and plot may have some problem but to me the setting so good like its make you feel better some kinda miss it....

but all the best to the new cast...
maybe rewatch the old one if the new va doesnt sit well -_-

A fantastic anime series. I love to watch anime. Today I am looking at twelve different projects. And I would look even more. Unfortunately, I am a student, studying is very time consuming, and I cannot always find time for the anime universe. But a long time ago, my friends recommended to me the site https://essaypaper.review/top10-essay-services-reviews/ , which helps me write various articles and gives me more time to watch anime. On this site, you can find free reviews of essay services, even about anime and manga. This site can also be used to find the most useful information about anime and manga creation.

the HYYYYPEEE <3<3
I'm a manga's reader from a year ago but it excites me as if i expected the anime 5 years
I reeaally liked the trailer. i'm already waiting for it

big nope, im a pro, look like a yuri but not a yuri is a no no no

HOLY FUCK I CANT WAIT FOR THIS, I read this manga and odsapjmkndfeioadusndioqwsadj its just sooooooooo goooooooooooood

Hmm, I just might start reading the manga then.

I first read Horimiya during highschool now it finally gets an anime.

Good for the fans, but did everybody forget that CloverWorks is also working on the second season of Yakusoku no Neverland in the exact same season as well? I know it was delayed from October 2020 to January 2021, but still. I hope this doesn’t impact that series too much.

OMG I am so excited for this! I love the OVA!

I"m surprise it took so long for a TV anime actually.

wait for this for a long time! hope the art will be amazing unlike the ova.

I just read the manga. This news made me very happy. 😊

wape said:
This seems like a reverse harem or some shit. Regardless, not much excited.
Man where did you get that idea😂 It's not like that. There are some haters who are just shit posting anywhere they like.


tragedydesu said:
'My biggest gripe is with Hori -- she used to be a great character. Responsible, kind, friendly, caring -- and she turns into this abusive sadistic jealous-nightmare tsundere'

eh ... not the kind of romance i can enjoy
skip
Don't believe shit posters. Just give it a try yourself you like to read Romance Manga that's all i can say.

Huge fan of the OVAs, never actually read the bigger manga because I was holding out hope for an adaptation. My patience has been rewarded.

Can't wait for January next year let's gooooo,super hyped.
Although I'm surprised it took them so long adapt a manga as good and popular as horimiya whereas crappy isekai harem gets anime left and right