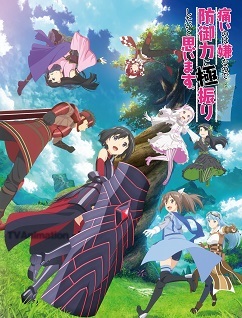 A second season for the Itai no wa Iya nano de Bougyoryoku ni Kyokufuri Shitai to Omoimasu. (BOFURI: I Don't Want to Get Hurt, so I'll Max Out My Defense.) television anime was announced at the end of its 12th and final episode on Thursday.

Synopsis
After an enthusiastic invitation from her friend, Kaede Honjou reluctantly agrees to try New World Online: a very popular VRMMO played by thousands of people across Japan. Naming her in-game character Maple, she sets out on her journey. As a complete novice to such games, she allocates all of her stat points into vitality, desiring to not get hurt. With not a single point in any other stat, Maple has extraordinarily high defense, but she can't move quickly or hit hard.

This doesn't end badly for her, however. Due to her high defense, Maple acquires overpowered skills such as Total Defense, Poison Immunity, and Devour. These skills, along with the incredibly powerful items she obtains, allow her to obliterate most enemies in a single hit. After only a few days of playing the game, Maple claims third place in a server-wide event, gaining a reputation as a player who is both unkillable and absurdly powerful.

Despite her overpowered character, Kaede has much to learn. As she progresses through the game, she meets new friends and acquaintances, helping her complete new levels and events. Through all of her adventures, she may even pick up some other crazy skills that exceed all expectations. [Written by MAL Rewrite]

The anime series adapts Yuumikan's adventure comedy light novel, which they originally launched on the Shousetsuka ni Narou website in May 2016. Kadokawa began publishing the novel in September 2017, featuring artworks by Koin (Haiyore! Nyaruko-san). The ninth volume shipped on March 10. The light novel has over 700,000 copies of its volumes in print.

Jirou Oimoto began serializing a manga adaptation in Comp Ace magazine in May 2018. Kadokawa published the second volume on February 22.

Yeah this show sucks. It doesn’t have a plot which resulting me to find the show are dreadfully boring because nothing is at stake. The characters just do whatever. But apparently lot of people love to sit back and let the slice-of-life endorphins wash over them. I'll probably still watch this anyway as an excuse to brainstorming myself with anything about MMOs.

ItsTooLate82 said:
Is it better than The Rising Of The Shield Hero?
If your talking which one keeps its quality up the whole story? I would say Bofuri, Shield Hero exponentially goes downhill the further it's story goes. I was getting more and more ticked because they didn't even give half an effort towards the end of Shield Hero's storyline.

To be honest I've really didn't like the first season. There were to many males in it for my taste . I find them very unattractive and I only want to see the cute anime girls. So I think I'll pass on this one

OMG! Any information about the release date? *u*

When I first saw bofuri and I saw all the girls in the picture I ignored it but When I started it I loved it. It is sooooo unique and different from other animes. This anime has a subtle tone which is good and obvious from reading the synopsis and just looking at the picture and I don't get why people are saying that bofuri doesn't make sense. I am soooooo hyped for season2. People should stop comparing bofuri with shield hero. Bofuri has a simpler tone while shield hero has a complex and deeper tone so it doesn't make any sense to compare it at all. bofuri is literally a virtual reality world while shield hero is isekai so it doesn't make sense to compare it.
Any one that wants to watch a fun and op main character grinding this is for you and for those that want a story filled with blood revenge betrayal and op main chatcter this is not for you

Usually when I watch a show, I can understand why people like it even though I don't. But this series, I have no idea what people are liking about this. I guess I still have a lot to learn. I hate this goddamn show.

Johnrupesh said:
WRRYYYY said:
Is it better than The Rising Of The Shield Hero?
WTF. Hell no. Shield hero is in the league of its own. This anime is shit. I dropped it on episode 4 and all this coming from a big isekai fan.

I don't want to badmouth this anime, because I did enjoy it even though it didn't have much of story or appeal and I just watched it because I wanted some anime as break before getting back to my work so it worked for me but are you KIDDING ME???? this anime gets a second season and Yona of the Dawn didn't????? What the actual hell?

Yessss, I loved this show so much

I loved the first season so much, that's something I enjoy watching. OPness, cuteness, funnyness and in another world (VRMMO-ish)!
Can't wait for the second season. :D

I really loved the first season. I am looking forward to this.

What the hell. This show is getting a second season? This is the most girly isekai show you could ever wish to watch.

WRRYYYY said:
Is it better than The Rising Of The Shield Hero?
WTF. Hell no. Shield hero is in the league of its own. This anime is shit. I dropped it on episode 4 and all this coming from a big isekai fan.

sora2eugene said:
WRRYYYY said:
Is it better than The Rising Of The Shield Hero?

tldr; i'd say its better but just because of personal reason. imo isekai doesnt suit serious plot too much. except for GATE which is awesome despite the serious plot. also the fighting scene in tate is so bad. even compared to bofuri.


if you want to compare the two anime (tate and bofuri); storywise, tate, like i said before, has a serious plot and this hate bias towards shield hero. meanwhile bofuri is more light-weighted, merry go round happy happy anime.
what makes me prefer bofuri though is the storytelling and the decently done fight scenes. while both anime does not have any at least decent proper fight scene like you would find in SEASON 1 of SAO or the newly released kimetsu no yaiba, the lack of action in bofuri actually helps the anime from showing how bad they were with the fight scenes. in tate on the other side, while they were trying to show that the anime is about action and fighting, the lack of actual proper fight really shows. if you want comparison, you can compare it to SAO alicization where the fight consists of japanese shouting english words they absolutely have no idea what it meant and laser beam here and there.

that aside, i dont think bofuri deserves a second season because i think the story and char dev won't progress much. the main reason i started watching bofuri is how maple gets her skill in a hilarious way and how her max vit affect her in the game and causes her to survive by adapting. but halfway through the season, when the event started to pop out here and there, the focus moves away from that.

Ever heard of Overlord? Mr. Ainz Oowl Goan would like to meet you in person.

....goddamit Silver Link.
You announced a S2 of this so fast while others are still waiting like Rakudai Kishi and C3.

WRRYYYY said:
Is it better than The Rising Of The Shield Hero?

Well it is somewhat similar with Tate no yusha in some sense, however, I assure you the anime is definitely NOT rip off, and it is SUPER WORTH IT for you to watch. Consider it as a relaxing isekai anime that makes you laugh, makes you excited, gets you all fired up.