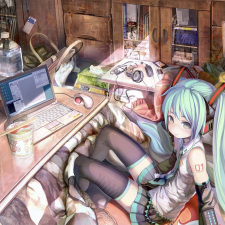 pienoo Aug 23, 3:55 PM
oh yeah? :/ i see. im going to college in a week and i joined this anime club, they do regular watch parties and stuff. its pretty neat. maybe some ppl do watch anime where youre at but dont necessarily bring it up, i dont know...
have you been to any conventions? (otakuthon this year for instance), i think its a good way to meet others interested in manga and anime. or like bookstores that sell manga where you can chat w others etc.

pienoo Jun 25, 11:15 AM
Hoi thanks for accepting the friend request. Saw you were a quebecker! I’m in Quebec too haha. Nice to see other people living where I’m at, the weeb community’s pretty small here I feel

Csriyuu Jun 2, 3:25 PM
10/10, all around, great story—couldn't have said it better myself. Liked and subbed, looking forward to your next release.

LustrousParadox Apr 25, 2019 12:00 PM
@Gazz oh yeah thanks. You’re welcome for agreeing, its great that positive people speak up so i saw that and had to disagree with them haters. Even if i don’t know as much as others. Have a great day!

On behalf of the Filipino people. please ignore whats our president saying to your country.

Gazz Apr 25, 2019 2:00 AM
Thank you for agreeing with me. Those high expectation monkeys are too noisy in the forum its ruining my mood, lol.

I would be fine if they have some intellectual point but what they are talking are just pure hatred. I'm not saying all of them, majority of them.

Tacoo Feb 10, 2019 12:29 PM
Couldn't care about her voice acting or what the comments on MAL say but the current news of her online is why people are hating on her through the web. From Twitter to YouTube to news articles you wont see stuff about her voice but her allegations and playing victim. Just shedding some light.

Tbh there will always be people who say opposite things of your opinion online and irl, either accept it and move on or waste your time with a wall; no point in caring if it doesnt involve the law or family or taxes. Just ignore what people say like how everyone ignores the sales people at malls (like I do :^>)