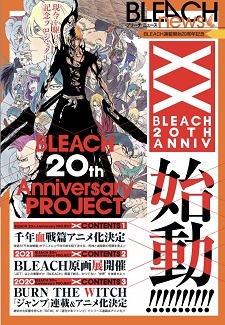 Synopsis
A paranormal action-adventure about sword-wielding guardians of the afterlife.

Ichigo Kurosaki never asked for the ability to see ghosts—he was born with the gift. When his family is attacked by a Hollow—a malevolent lost soul—Ichigo becomes a Shinigami, dedicating his life to protecting the innocent and helping the tortured spirits themselves find peace.

The peace is suddenly broken when warning sirens blare through the Soul Society. Residents there are disappearing without a trace, and nobody knows who's behind it. Meanwhile, a dark shadow is also extending itself toward Ichigo and his friends in Karakura Town.

When a mysterious group of warriors calling themselves the Wandenreich attacks, Ichigo Kurosaki heads to Hueco Mundo to help his friend Nel Tu. And when the Wandenreich takes the fight to Soul Society, an all-out war between Shinigami and Quincy breaks out! (Source: VIZ Media, edited)

Prior to serialization, Tite Kubo published a pilot chapter in December 2000. The supernatural adventure manga debuted in Weekly Shounen Jump in August 2001. After a 15-year serialization, Kubo ended the series in August 2016. Shueisha published the 74th and final volume in November that year. Bleach has a cumulative 120 million copies of its compiled volumes in print worldwide.

VIZ Media acquired the series' master license in March 2006 and serialized the manga in English in its print edition of Shounen Jump magazine between November 2007 and March 2012. The manga concurrently moved to the Weekly Shonen Jump Alpha digital anthology in January 2012. The company published the 74th and final volume in October 2018 and released the 26th home video installment of the anime in September 2015.

A live-action film adaptation produced by Warner Bros. Japan opened in Japan in July 2018. Directed by Shinsuke Satou (Gantz, I Am a Hero), the film grossed over 541 million yen (approximately US$4.9 million).

Bleach won the 50th Shogakukan Manga Award in the Shounen division in 2005.

Correction: An earlier version of this news stated that the anime will return in 2021. A premiere date for the anime has not been announced yet. MyAnimeList regrets this error.
Adapts MangaNew AnimePreview

That announcement video got me so damn hyped!

Super excited like many others - and also like many have expressed, am hoping that the producers with Tite Kubo-san will take the time to fix the ending that was super rushed and to me, did not make any sense with how the action was building. (Plus - I still ship IchigoxRukia or even Ichigo solo for life - regardless, I will be watching). Hoping they will do it right and bring back all the people who made the original series so amazing!

Finally! It's been way too long. Fck the haters :)

who gives a fuck about bleach anymore SMH

I hate bleach as much as I hate nucrapo and dragon your balls so who gives a shit?

is this sequel? or just skip to final arc?

Tite kubo getting lots of love this year. I do not want to see those eyes adapted...

WOAH! THIS IS EXCITING NEWS! I MISS BYAKUYA ♡

I'm not exactly a fan of the Bleach, but I'm still looking forward to it! This is your own, native and it is worth it!

I'm so happy and scared at the same time because if they go with that rushed ending from the manga well i don't know ..

Nice, we get the worst arc of the whole franchise animated. Not hyped but I'll watch it to shit on it later.

Probably gonna rewatch old anime or reread manga. I love Bleach, not for the story/plot itself but the universe holds a spot dear in my heart.

For me personally, this is anime news of the year. I had genuinely given up on this ever happening.

Let's go! The time for bleach has come!

naens said:
Thecutedog said:
I might rewatch this show like a CLOWN bc nostalgia and hype....
I'm actually now looking for a group or community to rewatch Bleach (in order to discuss each episode). If you know such a group, please let me know.
maybe make a discord server out of it and share it around? since that is my go to tbh.

Thecutedog said:
I might rewatch this show like a CLOWN bc nostalgia and hype....
I'm actually now looking for a group or community to rewatch Bleach (in order to discuss each episode). If you know such a group, please let me know.