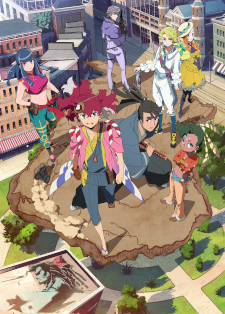 The official website for P.A. Works' original TV anime Appare-Ranman! unveiled three new characters, a new key visual (pictured right), and information about the anime's opening and closing themes on Wednesday. A second preview for the anime was also released on Youtube, revealing the anime's release date. Appare-Ranman! premieres on April 10 on Tokyo MX, with additional stations to be announced at a later date.

Takahiro Sakurai (Code Geass: Hangyaku no Lelouch) and Tomokazu Sugita (Gintama) were introduced as Dylan G. Ordin and TJ ("Crazy TJ"), respectively—both members of the outlaw clan "Thousand Three" and participants in the anime's transcontinental race. Kazuyuki Okitsu (JoJo no Kimyou na Bouken) will voice Seth Ritchie Cutter, one of the race's organizers and an employee of the automobile manufacturer, GM.

Anisong trio Mia REGINA (Citrus ED) will perform the opening theme "I got it!," a new song that will go on sale April 22. Voice actor Shoutarou Morikubo (Major) was tabbed for the ending theme, though the exact song has yet to be determined.

Appare-Ranman! was announced in October of last year, and the main cast was revealed last month. The original anime stars Natsuki Hanae (Kimetsu no Yaiba) as the titular character Appare Sorano, and is written and directed by Masakazu Hashimoto (Sayonara no Asa ni Yakusoku no Hana wo Kazarou episode director).

This is real shit. Hope the CG cars don't ruin it.

Cars racing? Holy fuck talk about a let down

Oh damn look at that cast.

This thing just keeps getting better and better. That music has me excited for the OST. And the character designs are so good. Costumes are on point.

I'm so hyped for this!