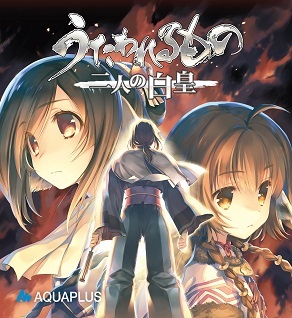 Naoya Shimokawa, president and representative director of Aquaplus, announced on his Twitter account on Saturday that visual novel Utawarerumono: Futari no Hakuoro (Utawarerumono: Mask of Truth) will get an anime adaptation.

Game Synopsis
After the events of Mask of Deception, the Yamato Empire is now ruled with an iron fist by a ruthless usurper who seeks to subjugate all before him. It's up to a couple of familiar faces to band together against the might of the Imperial army, and the fate of the world hangs in the balance as nations and generals must pick a side to fight with in this perilous civil war. Secrets will be revealed, friendships will be tested, and battles will be fought. Will peace and order be restored or will victory at any cost be the beginning of the end? (Source: Atlus)

Game publisher Atlus released the second and third games in North America in May and September 2017, respectively. NIS America plans to release the first game under the subtitle Prelude to the Fallen in March 2020.

OLM adapted the first game into a 26-episode TV anime that aired in 2006. In 2009 and 2010, Chaos Project released a three-episode OVA that covered events that were not shown in the TV anime. White Fox produced a TV anime adaptation based on the second game in Fall 2015.

Is this project cancelled?

This thread is like where I'm usually hit with confusion. Read the VN/ play game or watch anime for the best experience.

malvarez1 said:
Wasn't the last Uta show supposed to be garbage? Hopefully this is better.

It wasn't supposed to...

Wasn't the last Uta show supposed to be garbage? Hopefully this is better.

This and the Muv-Luv: Alternative adaptation... what a time to be alive for visual novel fans. I hope this time they can replicate the magic of the trilogy. A magnum opus of the medium for sure.

4 years waiting for this announcement. Now I won't need to buy a ps4 to get through the story.

I honestly thought this would never happen.

Finally. YES! I still like the first season the best. Season 2 disappoint me a bit. Hopefully this new one can do better.

i did watch (utawarerumono S2) 4 years ago without watching S1

last week i decided to watch the full series

i finished it yesterday

now are you telling me there will be S3?

Yesss, more Utawarerumono is always great. I loved both seasons.
Season 1 had basically all possible genres you could think of :D

Can we have any hope of this getting a good adaptation? The game is twice the size of Itsuwari no Kamen and the anime adaptation of that game was really meh.

Psajdak said:
I think first Utawarerumono anime was the only harem where I actually liked male MC.
Try playing Grisaia no Kajitsu VN

Damn, it took forever for them to announce this. Though it might be because Kuon and Haku's seiyuu went on hiatus for a bit.

Holy shit this is 3 years late but whatever. first season didn't do the first visual novel justice so hopefully they step up their game now.

i've been waiting for this since season 2 of the anime ended i still hope it will be better than season2 though.

I think first Utawarerumono anime was the only harem where I actually liked male MC.