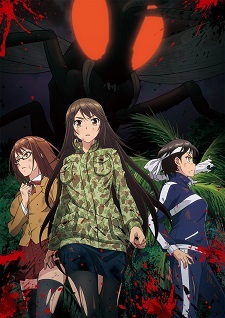 An official website opened for an anime adaptation of Yasutaka Fujimi and RED ICE's survival horror manga Kyochuu Rettou (The Island of Giant Insects) on Thursday. The anime will be bundled with the manga's sixth special edition volume, which will ship on June 20, 2019.

Synopsis
After an airplane crash during a school trip, Oribe Mutsumi and her classmates were stranded on a seemingly deserted island. Mutsumi found the other survivors, and used her wilderness knowledge to help them. She expects that they will be rescued in about three days, which doesn't seem so long to endure. However, she didn't account for the fact that the island is populated with gigantic killer insects. Her knowledge of butterflies, wasps, and more may be the only thing that will help any of her classmates survive to be rescued! (Source: MangaHelpers)


Akita Shoten's Champion Cross website began publishing the mystery horror manga in October 2014, which merged with Champion Tap! this past July and formed the new Manga Cross website. The fifth compiled volume was released on January 19.

Furthermore, the Manga Cross website also announced that Shuu Hirose (Grisaia no Kajitsu: Sanctuary Fellows) will replace RED ICE as the illustrator of the manga beginning chapter 21, which was published on Thursday.

I read the manga. It's basically like Cage of Eden but instead of ancient megafauna they have giant insects. Also chicks getting mauled and eaten by the monsters.

Of all things to get an anime... why this.

it sounds interesting..I'll give it a shot .Is just an OVA

The mangas score is abysmal, but the concept sounds very interesting. I'll give it a chance eventually.

I think I'm gonna pass this one.

Another day, another bottom of the barrel adaptation. I'm praying for a studio to adapt Spirit Circle :(

this was on my ptr list for long time. I didn't expect an adaptation tbh.

So the Director of Yosuga no Sora, the Screenplay of Seikon no Qwaser, the Character Designer of Queen's Blade, and the Studio that worked on High School DxD Hero. Let's party!

Really wasn't expecting this but good news anyway, i enjoy the manga so I'm interested to see some insect craziness and backstabbing from the characters every second or so, kinda wanted 12 ep but OVA is good too i guess.


Ummmm, I dunno about that.

So LOST, but with girls and insects? And no weird philosophy.

Might be so dumb that it could be entertaining.


Vivekananda said:
Is this series good?

It's average at best, if you like some gore stuff and learning random fact about insects. Characters are meh for the most part.


Oh well thanks not much interesting I guess then.


Vivekananda said:
Is this series good?

It's average at best, if you like some gore stuff and learning random fact about insects. Characters are meh for the most part.

Is this series good?

Lmao at the Director's track record, Spice & Wolf and Rokka no Yuusha being there makes it even more funny and weird Lol