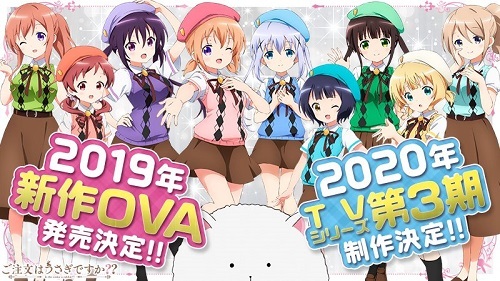 At the Gochuumon wa Usagi desu ka?? DMS Tea Party event on Sunday, it was announced that the franchise will get a new OVA and a third season. The new OVA will be released next year and the third season is due in 2020.

Gochuumon wa Usagi desu ka? is a manga series by Koi, which began serialization in Manga Time Kirara MAX in January 2011. A total of six compiled volumes have been released so far, with the latest volume shipping last November. The first two seasons aired in Spring 2014 and Fall 2015, respectively. White Fox animated both seasons, with Kinema Citrus co-producing the second season. A theatrical OVA, animated by production doA, premiered on November 11 last year.

Man o man even I have not finish the second season, I'm hype on this.

YEEEES!!! My lesbians will be back!! Man that made me so glad! That anime is one of my favourite Yuri/CGDCT of all time!! And its loli heaven ,,I hope they will have another ballet episode!! Those lolis sure bend well!!,,YEEEES!!!! GochiUsa is coming back?? Thanks God

DreamingBeats said:
GalacticMagna said:
This is great but.... 2020? WTF?
i would rather they take their time to make sure the anime is of sufficiently high quality like the previous seasons than try and rush the series resulting in animation issues, CG defects, etc.

Yeah, I guess we wouldn't want that

GalacticMagna said:
This is great but.... 2020? WTF?
i would rather they take their time to make sure the anime is of sufficiently high quality like the previous seasons than try and rush the series resulting in animation issues, CG defects, etc.

My reaction when I read that a third season is coming:
OH, YEAH!

*Sigh*
Regardless, I'm still pretty happy. The manga is great but this moe overload is even more enjoyable in colored and animated form. I'll be looking forward to it! :)

should be fun, but can't help laughing at the title Is the Order a Rabbit??? is it???

Nice! Looking forward to it! (ㆆᴗㆆ)*✲ﾟ*｡⋆

You can not remain impassive after reading such good news, I can not wait for the third season of "Gochuumon wa Usagi desu ka" to start. :3

Thank you lord. One of the best Kirara series out there.

Looks like production doA would be taking this over.
Because White Fox won't be delaying it until 2020.
Since they aren't fully book in 2019.

wooow, I'm actually almost finished with s2 now so this is good to know. Yayy