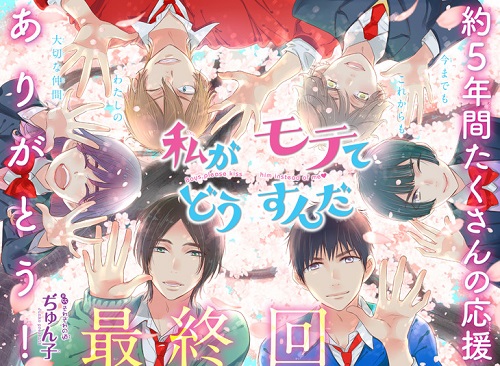 The manga, centering around the fantasies and daily life of a fujoshi surrounded by good-looking guys, began its serialization in April 2013 via Bessatsu Friend magazine. 13 compiled volumes have been released so far, with the 14th and final volume to be released on March 13. Brain's Base has adapted the manga into a 12-episode TV anime adaptation that was broadcast in Fall 2016.

Watashi ga Motete Dousunda has been published in English as Kiss Him, Not Me by Kodansha Comics USA since October 2015. The 13th volume of the manga is scheduled to ship this month.

They better make up for it by making a season 2

Junko's biggest work and none of those dudes even hooked up. Incredible.

Hope she writes some djs on the side. lol.

Lol XD
All that matter is my ship sailed~

Aww sad it's ending, it was a funny one~ can't wait to read more Juko stories tho!

I just read the final chapter and I'm sooo happy.

tsubasalover said:
Brain's Base has adapted the manga into a 12-episode TV anime adaptation that was broadcast in Fall 2016.

That anime adaptation was a travesty. WatashiMote deserved way more. I get salty when I think about it. Once again shows how in most cases, shoujo manga to anime adaptations get the short end of the stick.

I seriously hope Kakuriyo Yadomeshi is adapted well but it looks really low budget so far which is really unfair because most LN anime at least have a half-decent budget but being the first shoujo-ish LN to be adapted, I guess it's to be expected, ugh.


Will she ever make a new BL manga after this??

The real question at hand

Well she is a BL mangaka I guess she will.

Swagernator said:
Are there any gay pairs at the end ? Or just bait ?

Obviously baits. There has never been any homos in the story. All of them were interested in Serinuma, including Nishina (the only other female protagonist), then again as a close friend and nothing more.

The author managed to add some BLish scenes because she is primarily a BL author. Serinuma also represents the Fujoshis very well. She eventually falls in love with one of the boys (you can also read the Best Boy) who she dreamt of pairing with other boy(s).

Are there any gay pairs at the end ? Or just bait ?

Oh wow, I guess I could finally read it from the first chapter then since I felt like I cannot pick it up from the anime bc the anime has a messed up story line. Praise to Junko-sensei! \o/

Will she ever make a new BL manga after this??