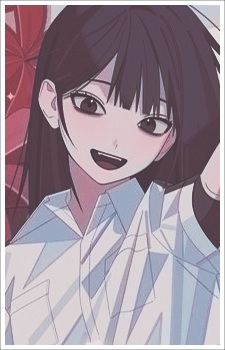 SaintZeph Jan 22, 9:58 AM
so so what you're saying is
him simply being there was taking the spotlight away from all the other boyos
naruhodo naruhodo
/runs

SaintZeph Jan 21, 11:43 PM
you finally banished him??? or was he taking up valuable space away from the other husbandos *le gasp*

SaintZeph Jan 16, 5:42 PM
another late reply /sneaks
yeah i get what you mean about the roommates thing. the risk of them being shady is always there/ they could be a pain or really annoying so there's that too ¬_¬
but imo if you live in a really big city while at uni when you're usually not making a ton, roommates sort of become unavoidable unless you're willing to cut back on other areas. so like everything, its an awful balancing game /sighs/
its so nice that you get the chance to visit your parents often ( ﾉ^ ω ^)ﾉﾟdo they pack a bunch of food for when you go back to uni too? i visit mine or vice versa once or twice a year because we're in two different continents but we talk every day so there's that i guess haha

ooh btw did you ever end up finishing watching mob? i might get skewered for this but i always felt mob was just a little better than okay, but that ending was pretty nice so it ended up being a high7/low8 for me >> also! i see you're watching ice guy! or at least that's what i call it with it ridiculously long title tlol. i didn't see it coming but right now its my highest-rated show of the season :') maybe its because its about adults this time im not sure but its just so so sweet and i cant help but love it <3
oh i see -- do you plan on getting back to manga/reading again one day or are like most of the stuff you like to read (like manhua + danmei) just not on mal? 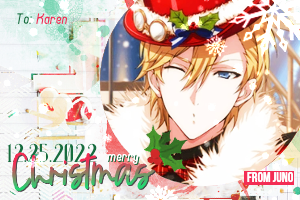 merry christmas tableflip-san!! I hope you have
a great day whether you celebrate it or not!
thanks for being my friend this year, looking
forward to our convos of screaming over
2d characters and endless gacha rants
next year too! (welcome back to the genshin
hole btw! >:D)

SaintZeph Dec 24, 2022 5:35 PM
karen!! im so happy that you got your account back despite them still having wasted your res and primos smh and hoyolab not refunding the difference iyaa. but enough of all that gloomy talk haha
thank you for being an amazing friend that i can share my genshin memes with :hey:
and ill try and reply to our previous convo soon!

oh one more thing
santa zeph has deemed you good for this year and has dropped by to wish you a merry christmas and happy holidays:)) 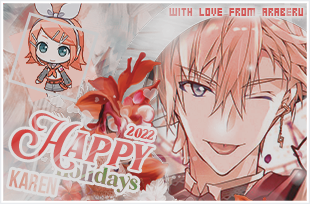 ♡ To: Karen-san
happy holidays karen! whether you celebrate christmas or hanukkah,
i wish you a wonderful time celebrating with your loved ones! thank
you for being one of my dearest friends here on MAL. i adore our
convos and am eternally grateful for our friendship. i always love
reading your comments and seeing your gfx works. i hope you
are doing well in school and i hope we can remain friends for
a long time! best wishes, karen onee!
From: Mina

PS. WHOEVER TOOK YOUR GENSHIN ACCOUNT BETTER GIVE IT
BACK OR ELSE IMA THROW HANDS. (ﾉꐦ ⊙曲ఠ)ﾉ彡┻━┻

SaintZeph Dec 16, 2022 12:36 AM
junos screenshot literally breaks my heart
praying praying you get your account back asap in all its glory karen

Kusoangie Dec 12, 2022 8:17 PM
hihi karen! hope you're doing ok T^T idk if my stupid suggestion is going to work at all but uh, idk i hope it does x-x
today i searched up your genshin acc and the avatar, namecard, comment all changed from what i saw you posted on twitter

i thought this could mean that your acc was sold to somebody- do you think friending them and talking to them would work?

if not then i hope you can get your acc back asap! I'll pray for you!

anyways... considering how things have happened and such, i am unsure if you'd like to see genshin related stuff on your profile so i'll spoiler the stuff for now. and please do take all the time you need to recover!! ღゝ◡╹ )ノ♡ YOUR TOMODACHI CAN WAIT FOREVER AFTER ALL!!


Haha, as we all should be, right? XD ZHONGLI IS DADDY MATERIAL FOR SURE THOUGH. (。・艸-。)-☆ｗiйκ Oya oya? Shield support zhongli...? I can kinda see that not gonna lie... \(⚆ᗝ⚆)/ ALSO A PARTY WITH ITTO, ALBEDO, GOROU AND ZHONGLI IN IT SOUNDS GODLY... orz i had to give up my pulls and use it on childe not too long ago even though i also really wanted itto-kun. (;﹏;) that is a pretty solid team /prays/

kazuha-san sounds like such a fun character to play. i kinda regret not going for him during his rerun a few months ago orz. wait you beat the 50/50 for both kazuha and xiao? DANG I AM JEALOUS!! I WISH I COULD HAVE THIS LUCK SOMEHOW. (ﾟoﾟ〃) maybe karen-san is hoyo's #1 child...? (i mean it seems likely nods nods). sounds like you've got a plan going on there! (◯Δ ◯ ∥) I wonder if it ended up working in your favor in terms of pulling for scaramouche...
from what i have heard, it seems like scaramouche has really been advertised by hoyoverse. they must know what they're doing since they got scara wanters on their hands and knees for him. ( ;ↀ⌓ↀ) /sweats
OMGG YES SAME HERE- I ALSO CANNOT WAIT FOR KAZEH TO BECOME PLAYABLE ONE OF THESE DAYS... if uchida-san is in it, BERU MUST GO AFTER THEM!! (ㆆ ᴗ ㆆ) UNITING FISCHL AND KAVEH WOULD BE LIKE REUNITING UCHIDA-SAN AND UCHIDA-CHAN! (aka yuuma and maaya).（ﾉ´∀`）
oh wow... i actually had no idea we had so many enstars voice actors voicing genshin characters... :o !
WAIT WHAT HOKUTO IS ZHONGLI.... MAMA IS KAEYA... AND SUBARU IS SCARAMOUCHE...??? EHHHH (; ꒪ö꒪) GEEZ THE FACT IVE NEVER RECOGNIZED THEIR VOICES EITHER... ffff might be because i only listen to english maybe... /sweats
oohh and they also share voice actors among aoppella as well? ;3 i should take a lookie into that franchise. i've been seeing it pop up on your profile every now and then and ive been looking for more idol medias to dive into. (〃´∀｀) i definitely will look into it! i recall seeing the blonde boy (?) on your profile a few times!
how's the progress on your laptop screen going btw? still sucks to know that its broken TT I HOPE YOU HAVE BEEN HANGING IN THERE THOUGH KAREN-SAN!! /HUGS/

memorycloud Nov 15, 2022 9:58 PM
ugh i feel you. i stopped artifact grinding to collect materials for characters i want. im currently farming for kokomi (hope she reruns in december fr)! i've already completed getting her sango pearls, now i just need to farm her boss and her talent materials. i'm also going to give her my barbara's set for my nilou bloom team. i still need to get a better goblet since im currently running an hp one so my barbara at least has some healing lol

dori is pretty cute! her playstyle isn't really for me but i love her chinese VA and her character design. its got a bunch of nice purple shades. i haven't seen her animations yet but the mask idle intrigues me :o hope your farming goes well for her!! and im sure your wits and mora will last since you've from a lot of them during 1.0! just a tip that i've learned. once you level your characters to the 80/90 phase, only go up to 89 since going to 90 takes a lot of wits from what i know (somewhere pretty high, like 80-90s)

Shino Nov 9, 2022 10:48 AM
Now, that surely sounds like something which not gonna happen until you graduated from your uni and found yourself a stable job. /sweats/ Turns out the latest version of Photoshop is too heavy for your device to handle eh... Is travelling back to your home actually that time consuming? I literally haven't been going back to my hometown ever since the relationship between me and my dad gone bad previously so I would definitely say that it is important to get home, spend time with your family who is looking forward for your return while you are still able to enjoy it despite how hectic it is. It is no longer a privilege I could enjoy

Having less time on GFX just means you now have other priorities in life so it is totally fine! Even when I am always eager to see the progress of your profiles, it feels even happier for me to see you progressing in your life.

The starting for the new season of i7 surely pains me to watch too... It is like I am unable to rate the episodes 5/5 genuinely due to how I often feel pained after watching them. To be frank, I don't usually watch donghua thanks to my political views unless someone recommends me to it....
All Comments