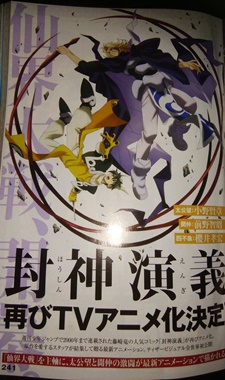 The combined 36th and 37th issue of Shueisha's Young Jump magazine will reveal on its Thursday release that Ryuu Fujisaki's fantasy manga Houshin Engi (Soul Hunter) will get a new TV anime adaptation. The announcement was stated that it will be a remake and three new voice cast members have been revealed.

Houshin Engi Gaiden will start on 21st and 22nd double issue of Weekly Young Jump magazine releasing April 26 for a short time (along with resume of Terra Formars, as it is the main topic on the article).
https://natalie.mu/comic/news/278690

AH! Houshin Engi is my favorite manga of all time! If it could gt a high quality, faithful adaptation I think it'll gain the popularity it deserves. So excited! The oroginal anime wasn't bad, but it was way too short and it missed the beat parts of the story...

This series was made before Hunter x Hunter

I meant the adaption style

What is adaptation style? What are you talking about?

This series was made before Hunter x Hunter

I meant the adaption style

Now if we get some Yonekura Chihiro... best part about old series.

Oh wow, that's crazy. I didin't think it was popular enough to get a new adaption.

This also reminds me that I need to continue the manga; it's been over a year since I read a volume.

Hopefully they adapt the whole manga this time.

Hey, I'd come across this series all the time. Nothing about it ever really urged me to give it a try though. Also apparently I've read a special chapter for it unknowingly, since it was part of an anthology.

Maybe Rurouni Kenshin still have a chance to get full remake, or Bleach to get new anime.

OMG I can't believe it. It's fantastic news and one of the best news from couple months. I can't wait for it!

Wow this series. I remember seeing an episode of it way back as a kid and could never remember the title of it.

JizzyHitler said:
GoldenDevilGamer said:
JizzyHitler said:
Can you imagine if mX0 or something suddenly propped up and had an actual ending.
I would cry in happiness if that actually happened.
it'll never happen but a man can dream damn it. Even if that never happens there are some finished shounen jump series that absolutly deserve an adaption even with their endings intact.

now that you mention mX0... black clover is really similiar with it, minus ecchi and strong harem romance element, change school with fantasy, with more nakama things... it's shame last 2 arc mxo does really uninteresting... and his newest works kissxdeath doesn't really pick my interest either...


JizzyHitler said:
I for one would absolutely lose my shit if sesuji wo pin got an anime, they could do the whole thing in 26 episodes and for a supposedly canceled series the ending is very satisfying and climactic. I just think jump really should capitalize on some of their properties just sitting around.
sesuji wo pin was ranked decent, and it was sell great considering it doesn't has anime adaptation... i don't see any reason why jump axed it... if anything, the author is the one want to finishing it soon... he immedietly make new manga too afterwards...

Honestly, I have been waiting for it since forever.
Given that now it's old anime adaption changes damn alot of the plot and it totally disappointed me who love reading it's manga. It still remains as my #1 fav manga of all time even after so many years. :')

Houshin Engi was one of the first manga i've ever read, so this is amazing news for me. I didn't like the first series very much so I stopped watching halfway, can't wait for this new version though! I hope it's a full faithfull adaptation to the manga.

Rei366 said:
Even the manga doesn't follow the original novel (who's not original, read my above reaction). It introduces a lot of anachronistic elements because the mangaka likes sci-fi.
The anime is: quite ugly (and I love cellulo animation), presents a full story by covering the few early chapters then at mid-points cramming characters/events to reach an original conclusion that's somewhat reminiscent of the beginning of the end of the manga (it's logic since the story wasn't fully new). It "sacrifices" around 80% of the events, characters and doesn't even exploit all the introduced characters. Of course, the violence is highly toned down. And all the whereabouts are not entirely revealed.
The manga is in a sense a typical shônen nekketsu with a very large cast (where every character ends up being useful later) and several arcs: quests, battles, ennemy territory invasion, final boss, etc.

thanks for the nice and detailed response, guess i'll wait for the remake then


Draconira said:
Just wait for the remake. The old Anime has an alternative route and in my opinion, I like the outcoming of the manga more.
yeah i'll just watch the remake
thanks

Never watched the original, but a sequel sounds cool :D

*driool* I hope it will be full manga adaptation like it was for Fullmetal Alchemist.

Awesome. Now the anime only needs to be faithful to the manga

I'm all for reboots of old series. Might be nostalgia speaking but they seemed to be less money grabbing bland shit than what is made nowadays. Get that Busou Renking and Elemental Gerad as well.

This type of thing is what anime fans dream of. Hope they don't butcher it though.