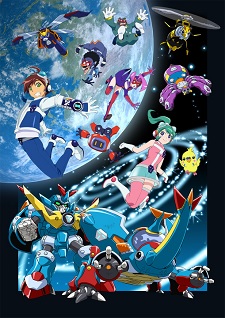 Tatsunoko Production has announced that the upcoming TV anime Time Bokan 24, a new production of its classic Time Bokan title, will begin airing in October 2016.

The original Time Bokan series began airing 41 years ago on Fuji Television and earned a viewership rating as high as 26.3% with an average of 19.0%. It also spun off other classic titles such as Yatterman and Zenderman.

Time Bokan 24 is one of two productions commemorating the Tatsunoko Production's 55th anniversary, which will fall in October 2017. The series will air on Yomiuri TV, NTV, and affiliated networks on Saturdays at 5:30 p.m.

Synopsis
The protagonist Tokio is a first-year middle school student living in modern Tokyo. One day to his surprise, he is suddenly appointed as a member of a 24th century organization, the Space-Time Administration Bureau. Tokio learns that, in reality, the history written in textbooks is all a lie and that the true history of the world contains amusing facts that remain hidden. For example, the beautiful woman known in history as Cleopatra is actually a stand-up comedy duo named Cleo and Patra. Additionally, the folk tale hero Momotarou is a man more demonic than all demons.

Tokio and fellow bureau member Calen use the Bokan Mecha 24, a machine which can transform and merge into various forms, to search for true history. Tokio and his friends must face three evils familiar to the Time Bokan series, Bimajo, Tsubuyakky, and Suzukky. Together, they form a group called the Akudama which has been hired by the world's largest textbook company, History Paradise, to protect the history textbook. What true history will be revealed next?

The visual doesn't impress me but after reading the synopsis, I think it could be fun in some ways.

Never seen the original before so coming into this series fresh.

Rei366 said:
Is this Hino Akihiro (Level-5) initiative to put his hands on another old classic of the japanese animation? Or is it Tatsunoko who asked the man to create the new animatio ?
Tatsunoko is the one on the production committee. I assume they asked Hino and Level-5 to help with creating the initial designs.

Is this Hino Akihiro (Level-5) initiative to put his hands on another old classic of the japanese animation? Or is it Tatsunoko who asked the man to create the new animatio ? Maybe it is like the last time, when Sunrise offered him to make a series out of the material he developed for a Gundam game, it didn't go well. I'm curious about it, please.

I saw a few old episodes back then but have no memory of it besides the villain trio design. Wonder how far/close it is from it.

PS: if anyone knows about a future L-5 Time Bôkan game, share your infos please. Especially if you know on wich platform it will be.

I doubt it will be 19-26.3% viewership in this day and age. Anime was more popular with kids in Japan 41 years ago than it is now and there are far fewer kids there now than 41 years ago.