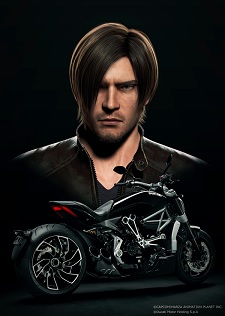 Marza Animation Planet has announced that its full CG movie of the Biohazard series, scheduled for 2017, will be titled Biohazard: Vendetta. It will also be marketed as Resident Evil: Vendetta in English-speaking territories.

In collaboration with Italian motorcycle manufacturer Ducati, the company's xDiavel motorcycle will appear in the movie. Ducati will also be featured this weekend at the 43rd Tokyo Motorcycle Show, which shares the same venue complex as AnimeJapan 2016. Leon Kennedy will ride the xDiavel while going past enemies.

Biohazard: Vendetta, whose original survival horror-action games have sold more than 66 million units, will showcase the latest CG technology in the industry. The characters Chris Redfield and Rebecca Chambers will also appear in the movie for the first time.

Konte said:
j0x said:
hype for this, the last 2 movies of Biohazard has awesome 3DCG

Are you implying that you want Resident Evil... in normal 2D animation? That's blasphemy, almost on the same level as some of the latest RE games themselves (excluding 7, since it's looking like it could be a return to awesomeness).

Finnaly, some continuation after Revelation or Resident Evil 6. Cz RE 7 seems taking a new step and doesnt involve a past character right now. Wonder what happen to Chris after loosing Piers Nivans and its been a long time since I saw Rebecca.

Cant wait for this

Both Leon AND Chris?! Oh man.

Well, at least Chris will be on this.

I haven't seen the other two CG Resident Evil movies. I guess I'm better off playing the games (even though they're mediocre right now).

Haven't seen the last few movies, guess i should start

I enjoyed the last movie a lot. I hope we get to see Ada Wong again.

Konte said:
j0x said:
hype for this, the last 2 movies of Biohazard has awesome 3DCG

they are action movies so story telling are not its main strength, and i do not know about you but i found the 3DCG of those 2 movies to be better than any 3DCG seen on anime TV series so far, the movie budget being big in most cases helped that

j0x said:
hype for this, the last 2 movies of Biohazard has awesome 3DCG

hype for this, the last 2 movies of Biohazard has awesome 3DCG