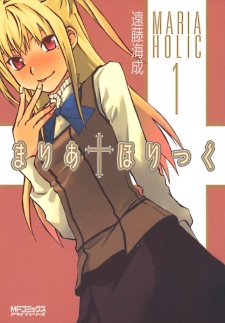 Monthly Comic Alive is announcing in its December issue on Monday that Minari Endou's manga Maria†Holic will end in the following issue, which is being released on November 27th.

The final volume, releasing on January 23rd next year, will include a special commemorative edition bundled with a booklet of illustrations drawn by special guest artists.

And nothing of value was lost.

lots of black humor - great series :) unfortunately the translators of the manga dropped it ...

That was literally the last time I enjoyed this series.

I didn't even know that the manga was still going...

The anime was so-so. Hope the author makes another series that could be shafted though.

Hope it's not a lame ending.

UnbornMVs said:
This is that trap anime right ?

I thought it was yuri-themed?

I couldn't make up my mind to watch the anime... But I will someday!

Not a fan the manga but I hope it ends well.

I need to watch the Anime. It has been on my plan to watch for quite some time already.

Oh hey that's on my PTR list and I'd love to read it but OH WAIT THE SCANLATOR DROPPED IT.

The manga that's everywhere, but no one reads.

This is that trap anime right ?

I want a third season :c