Manga 'Bakuman.' Gets Live-Action Movie for 2015 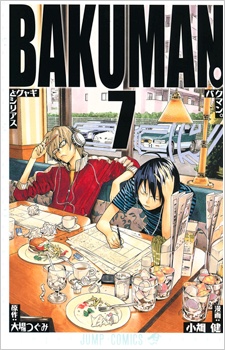 According to Natalie, it has been announced that manga Bakuman. will receive a live-action movie for 2015. The director will be Hitoshi Oone. The illustrator of the manga, Takeshi Obata, will also be participating in drawing the manga script in the movie.

Three seasons of the TV anime series aired from October 2010 to March 2013.

Takeru Satou -- the kenshin himura live action actor doing mashiro moritaka...
well anyways i hope it doesn't mess it up since bakuman is too long to be compressed in a single movie...
but anyways they can even compress an anime with more than 100 episodes in a single movie(prince of tennis), i just hope it will be really good since I really like bakuman

Seems interesting to me. Now I just need to get started on the manga.

Even though I love Bakuman. (favorite series ^.^), I don't see this actually being good. Some of the character designs are too unique in the anime, so I doubt that they will look at all realistic in a live action film. I guess I should get ready to see my perfect image of Niizuma Eiji get destroyed, piece by piece. :'(

FIRST 1 TO TELL ME THEIR FASCINATION WITH THIS SERIES WINS...go

OMFG, Sato Takeru and Kamiki Ryuunosuke as Saiko and Shujin?!?!

Hope the adaption will be good. They're probably gonna leave a lot out, but what I really want to see is Yoshida manipulating Hiramaru, lol.

Also wondering who the rest of the cast is. Especially Eiji, he's one of the best characters.

That seems a great idea, actually looking forward to this.

violity said:
Keitaro004 said:
I just wish they could've used the voice actors as the real life versions... It feels wrong when the characters have completely different voices. And most actors in JP drama are horrible anyways, so it wouldn't be a problem if they can't act.

The actors casted in this one are actually very good by Japanese live action standard, especially the actor who played Kamen Rider Den-O and Kenshin.

Haven't watched live-action before, but I would mind to start with this. (^-^,)>

wow this can be a pretty good movie :P

hoho. It seems like christmas is early as usual

It's the first time that one live-action is interesting for me.

But, will be the three season on just one movie? It seems not enough i think

alexpte said:
It took them long enough, I was surprised it wasn't announced sooner.
Looks like I wasn't the only one thinking this :)

Hmm, this could actually work...

Haine15 said:
Great ... but 4th season is better >_>
There are no more chapters left to adapt.