by dtshyk
Mar 20, 2013 10:19 PM | 37 Comments
According to Anime!Anime!, Morimi Tomihiko's novel "Uchouten Kazoku" was announced to get a TV anime adaptation. It will be aired from July. The original character designer is Kumeta Koji and the production studio is P.A. Works.

Synopsis:
An animal comedy. In Kyoto, there are three kinds of residents: humans, raccoon dogs, and tengu. Shimogamo Yasaburou is the third son of the Shimogamo raccoon dog family. His father, Soichirou, had been the head of Kyoto raccoon dog community until he was eaten by the human members of "Friday Club". While taking care of old tengu, fighting with other raccoon dogs, and playing with a psychic human girl, Yasaburo approaches the truth of his father's death.
Note: In Japanese folktales, raccoon dogs often take the form of human.

Key Visual is out. Anime to start from July 7th 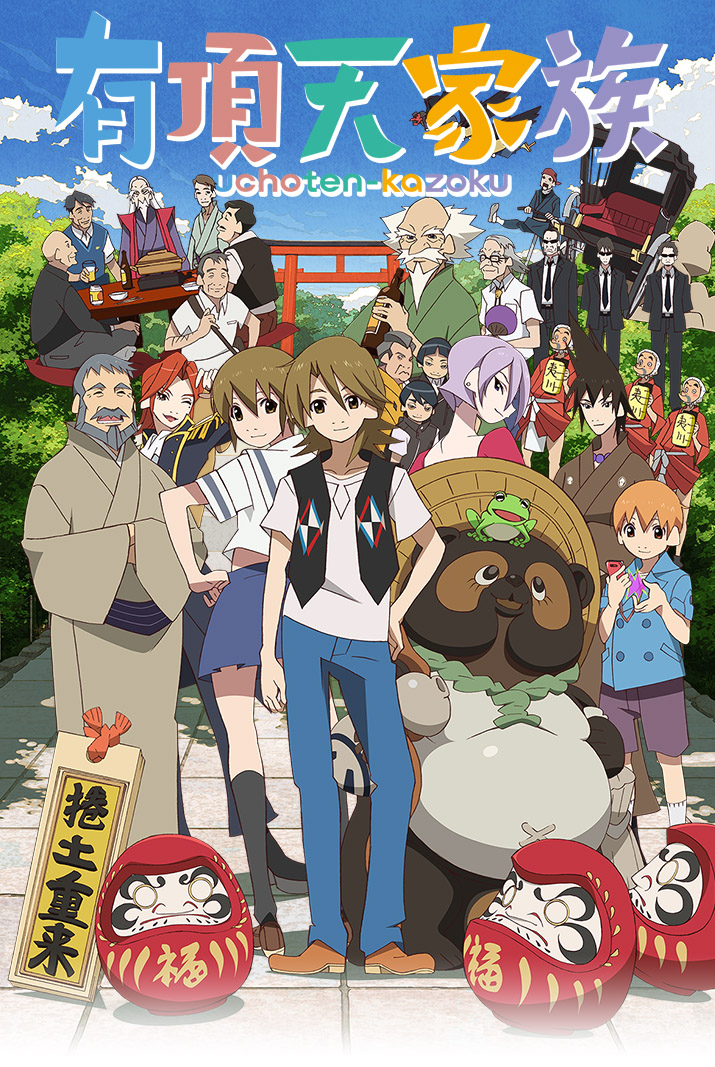 I second that. XD

the seiyuu made me have interest in this. SAKURAI . JUNICHI. EPIC.

A mother obsessed with an all female theater troupe and a gender bending main character. This raises an eyebrow and i can see it making quite a few heads explode. Art style and character designs look nice.

Sanguis said:
Synopsis sounds a bit iffy, but it's the same author as The Tatami Galaxy so count me in!
Everything I need to say!

Kumeta (SZS), Morimi (Tatami), and PA Works. One of these is not like the other.

i don't know yet i kinda i'm full of animal anime in the U.S ALREADY

No offence to any 1 who is exited about this series but....really? a studio would start a series like this then to finish great series that never got a 2nd season? SMH

Designs look like more colorful season of Zetsubou sensei ;) Just because of it I'm going to check it out.

So no Nagi no Asukara in summer then? That's sad. Hope it hasn't been cancelled or anything. Well, if it airs in FALL that's good too.
On another note, this anime sounds funny plus DAT CAST.

Great way to compliment the summer heat. Which reporters say will be the fiercest in here for almost 20 years. AC and animals with PAworks scenery and Kumeta designs is a good combination.

VioLink said:
BigSimo said:
edit: whoops totally missed the huge "PA WORKS". unfortunate that madhouse didn't grab this
Well its not a total loss since PA works does a great job at making its anime pretty scenery-wise, and rarely has cases of QUALITY in their recent works. I know that madhouse does excellent jobs with adaptions (Tatami galaxy, HxH, Chihayafuru) but I believe that PA works can deliver as well.
oh for sure, i don't disagree that PA works can deliver (when it comes to the production side of things, they tend to excel) but i would like masaaki yuasa to helm this, but he only really collaborates with madhouse even though he is freelance. i'm sure though, whichever person they get to direct this will take a leaf out of tatami adaptation's book.

Little tanuki fighting against other tanuki. I imagine that to be cute as hell.

Seeing how Nagi no Asukara was announced a while ago, I always supposed it would air in the summer, as it would be a perfect fit and RDG is slated to air in April, so would this mean this is the first time P.A. Works has two works running simultaneously?

Gonna give it a try when it starts airing.

Sanguis said:
Synopsis sounds a bit iffy, but it's the same author as The Tatami Galaxy so count me in!
Amarrez said:
Kumeta character designs? Sign me the fuck up. Anything he touches is automatically golden.
I'm in.

Duh, screw them and their "current service not available in your country". >.>

Hmm Not to interested but I'm willing to give it a try anyways when it comes.