by dtshyk
Nov 11, 2011 3:09 AM | 75 Comments
According to AT-X channel, the airing of Gintama' episode 232 on the channel was canceled in response to the request by TV Tokyo, one of the producers of the anime. The episode was aired on TV Tokyo on October 31st.

Director Takamatsu Shinji tweeted that the episode was repeatedly rejected by TV Tokyo due to the inappropriate contents of the episode and the program data of the episode was submitted to the TV channel on the airing day. Takamatsu said "If Gintama anime cannot remain to be 'Gintama', we should rather stop airing it on TV than air something not 'Gintama'. I believe such a day won't come."

In the episode, they have joked Renho, one of the Cabinet ministers, and Ad Council Japan.

Update Nov 14th
TV Tokyo replied to the inquiry of an online media that the airing of the episode was canceled because there was a description which can be associated with a specific person. They refused to answer if there was a protest from the person.

Update Nov 18th
Takamatsu Shinji tweeted that TV Tokyo decided to cancel the airing on its own and nobody has protested against the contents.

maybe, politician of japan are just like mr. omura from the last samurai, too sensitive but not realizing they're dirty

LOL Gintama ftw! Never give up on the dirty jokes! XD

P.S - come back soon, life without Gintama anime is like Shinpachi without his glasses!

dafuq?! why TV tokyo bans Gintama? 'We' in the Philippines loves gintama.. we protest against it..

Man all it did was make fun of her clothes and haircut. What kind of politician would get upset with that?

It's funny that this episode gets banned, but the Funeral ep with the penis jokes doesn't.
LOL

Update Nov 14th
TV Tokyo replied to the inquiry of an online media that the airing of the episode was canceled because there was a description which can be associated with a specific person (presumably Renho). They refused to answer if there was a protest from the person. 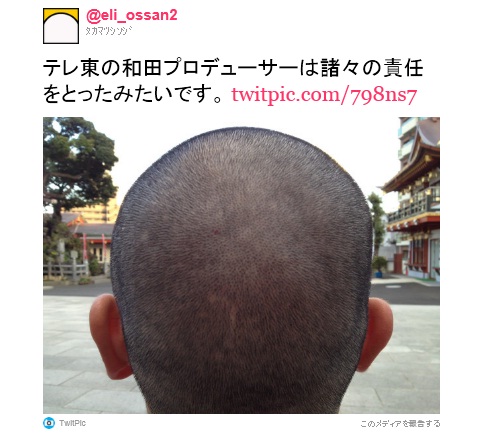 He actually did it himself, as a initiated move to apologize.

GaZsTiC said:
So wait. You can make fun of celebrities and anyone who has a shred of publicity, but you cannot shit-talk politicians?

Freedom of speech is dead. Fuck Japan.
then where are you watching japanese anime like a whore
if you dont like them...dont watch what they make

Wow politicians gotta ruin everything. They would never ban something that here in American its almost part of our culture to make fun of people XD

I realize of course they wouldn't explain it. I just get annoyed when there's not enough info for me to form an adequate opinion.

I wanted to know what else was in the episode, since people seem so sure it was because of the political parodies but are not really explaining why they think it was that and not something else. I suppose I will download the episode and find out for myself.

Thanks for the reply. ^^

Edit: Also according to Wikipedia (for whatever that's worth), AT-X is a subsidy of TV Tokyo, so that explains that part.

Would be nice to get all that clarified, though. Like I said, no offence to dtshyk, but the original post was way too vague.
Things like this won't be clarified. You cannot expect detailed explanation of such a delicate issue on business. But thanks to Takamatsu's tweets, we can guess what happened backstage.

1. TV Tokyo objected to the contents of the episode and made Sunrise revise the story many times.
2. TV Tokyo finally approved the revised edition and the episode was aired at last.
3. After the airing on TV Tokyo, something happened to TV Tokyo's mind and they asked AT-X not to air the episode.
4. AT-X said the cancellation was TV Tokyo's intention.

Other than making fun of politicians, what else was the content of the episode? OP was kind of vague.

Also, sounded more like TV Tokyo just didn't want to lose business to AT-X since my understanding is they probably have different content standards.

Would be nice to get all that clarified, though. Like I said, no offence to dtshyk, but the original post was way too vague.

Well well... they should be glad that Gintama makes a parody out of politicians... it gives them more publicity ^^

Does political satire even exist in Japan? Derp.

seishi-sama said:
So, I'm guessing Gintama is losing popularity now and they had to draw extra attention to the show?
lol. gintama is almost always in the top ten dvd sales for the very least...

Lolwut? Don't they have freedom of speech there?

Some people need to learn to chill.

So, I'm guessing Gintama is losing popularity now and they had to draw extra attention to the show?