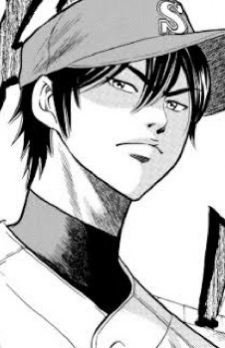 hello! would you like to be a translator, cleaner, or typesetter at eien scanlations? :)
we do various manga in genres such as shoujo, josei, BL, slice of life, sports and romance!
http://myanimelist.net/clubs.php?cid=69595

You're going to a seiyuu event! ENJOY YOURSELF! 8D You so need a Sims game. Or Tomodachi Life. I love all my anime miis. If I go for a day without playing with them, I feel weird, like something's missing from my life. XD What new swords game is that? Monster Hunter? I'm not a gamer either. I just happen to play a few games obsessively. (And I watch gamers on Twitch. The good-looking ones.) You have twitter? To stalk seiyuu? ;D I know Nakata Jouji is pretty active on Twitter. I'd follow him in a heartbeat if I had an account. 8)

How are you doing? Still in Japan? Still having a great time, I hope. How's work? I'm doing okay, I guess, for being older and not any wiser. It's my special talent. My kid's 21! Legally an adult who can vote in the next election. Time flies too fast.

JonnyVicent Jun 16, 2014 5:12 PM
Hum, I see, it's like all over the world, exist who think one way and who think of another way. But I'm disappointed, I never thought they saw the anime that way. :(
The attitude of this man is realy Honorable, in portugal are also very biased with homosexuality (particularly among men), I'm straight and I also have no problems in talking about it, but I confess that I would be bothered if a friend of mine said me that he is gay, but then I would get used to the idea, I wasn't going to stop being his friend for it. :)

JonnyVicent Jun 11, 2014 11:32 AM
Hmm, I see, I did not think that the Japanese were so conservative about it, because the anime is a hallmark of Japan.
Otaku in Portugal is just someone who is a fan of anime, does not mean he are obsessed with it.
At least, not exist prejudices against the sleeve.

JonnyVicent Jun 10, 2014 7:20 AM
So how are things out there?
I imagine that everyone see anime or not?
I asked, because if you had been just kidding I could not ask these questions. :)

You really live in Japan?
Or are just kidding?

tastylizard Jun 7, 2014 7:35 PM
Nine figures on preorder! XD The happiness you'll feel when you finally get them! 8D

I'm having way too much fun with the game. This morning, Aomine decided he needed Sanzo in his life, so he confessed and (to my utter surprise) Sanzo agreed, so they're dating now. Officially "sweethearts". XD

tastylizard Jun 6, 2014 9:56 PM
Hey, hey! Seeing as how you've been in Japan for a while, have you played Tomodachi Collection? The English version, called Tomodachi Life, was released yesterday and I'm having a blast! I put some of my favorite anime guys in my game, sit back, check every hour or so and watch the craziness unravel. Heh. It's even better than the Sims games since I don't have to micromanage the miis. They do stuff on their own. I made a LJ post with some screencaps. (After neglecting my LJ for over a year!)

Is it sweltering hot in Tokyo yet?

tastylizard Apr 28, 2014 9:36 PM
They did. They restarted, so they started right at the beginning. (Just like with FMA. And if they could do this with these two series, why not Rurouni Kenshin!?!?! A fangirl can hope, right!?!?!) Right now, at over 100 episodes, we're in the middle of the Chimera Ant arc. SO SO SO SO SO dark and intense. I feel like I'm losing a year of my life every time I watch. (The cliffhangers are killers so I try to watch only after I have collected a few episodes.) You should totally watch HunterxHunter. And One Piece. 8D

People have been complaining in the forum for a long, long time. After a while, something improves. Then after a while, things go back to being super annoying. This unreliable yoyo-ing gets to me. (You're one of the lucky ones who hasn't been affected too much.) The captcha nonsense appears to have stopped (and I hope it stays that way) but there's no telling when the trouble will start again. I will not delete my account here, so I guess I will try to maintain this one and the one at AP at the same time. If one site goes down, at least I'd still have a list at the other.

You're right about this season, it's pretty boring. I am so pleased with the return of Mushishi though! What a great series. The other ones I'm watching include Diamond no Ace, Haikyuu, Yowamushi Pedal, Isshukan Friends (I am addicted to Hosoya Yoshimasa's voice) and, of course, One Piece and HunterxHunter. This particular HunterxHunter arc is gruelling. So dark, so intense!

I heard that Psycho Pass is getting a second season? I'm looking forward to that.

Wish I could be in Tokyo. I wouldn't mind spending entire afternoons in the craft supplies stores! That's after I visit Animate and Mandarake and K-Books. And the cat cafes.

tastylizard Apr 25, 2014 8:20 PM
How are you doing in Japan? Sakura season, right? Wish I could experience it! Have you been to seiyuu events? Hope you are doing well.

I wanted to let you know that I may be moving over to Anime-Planet permanently. This place is driving me crazy; logging in fails multiple times on a daily basis. I already have an account at AP and exported my list over. 8)

kuroraka Apr 15, 2014 11:53 AM
Sure, Oofuri is not realistic in a "faithful documentary of RL sport" kind of way, but it sure is more realitic than most of the crap out there. Is there any truly realistic sports series at all?! REAL might probably come close if you want to call it a sports manga...as for "they can't lose once they've entered the tournament" - welll, why do they have to enter the bloody tornament at all?! I'd much rather watch a series about a team working their asses off and then MAYBE they'll make it to stupid Koushien, Inter High or whatever at the very end...that would make for some interesting character development for once and the whole "underdogs" stuff would actually be believable that way...why must it always be tournaments, gimme more training arcs!!!*sigh*

Well, i do realize that i'm probably in the minority and a lot of people seem to enjoy the usual sports series formular. Of all the sports series i'm currently watching while working out, i enjoy Initial D best which is about car racing...and old...and includes a lot of tech babble which goes way over my head...but it only has 1.5 no-gos which is pretty good in my book.XD

kuroraka Apr 14, 2014 10:05 AM
I was completely prepared for danchou to die back then to be honest, but i guess he is still needed...i don't think he will dare to kill off Levi, not before the final chapters at least. He's probably more popular than Eren and Mikasa by now, it would probably cause a riot.XD

Yeah, i think it's nice that the Haikyuu!! boys actually look like boys and not like 25 year old men like in so many other sports series...ahaha, i remember your irrational dislike for poor, innocent Mihashi!:P But at least we both seem to like Haruna...*lol* Oofuri is actually an almost perfect sports series for me because it avoids all my "no-gos" (see list below), but it still didn''t work for me as a manga...:(

Kuroraka's sports series No-Gos:
1. i can't stand the main character (i admit that's highly subjective, but sports series seem to have a special talent for featuring characters i instantly dislike...)
2. the main character/team are supposed to be coomplete underdogs who don't stand a chance against the BIG BAD OTHER TEAMS but in reality they never lose...except for completely unimportant practice matches, maybe
3. only the MC/team knows what teamwork or fairplay or having fun means while all the rivals are arrogant and evil jerks
4. supernatural moves...if i want to see people with ridiculous supernatural powers, i'll watch a fantasy series, thankyouverymuch.

I realize that most sports series suffer from at least one or two of the above, but as long as it isn't sll four, there's still a chance i will enjoy it. So my hopes for Haikyuu!! are still high.XD

Btw, Baby Steps hasn't been too bad so far, even though the MC features very silly hair and there's gonna be het romance....but no magical tennis for now (fingers crosssed!!!), PoT has scarred me for life.
All Comments