Although it still feels like it only just started, we are now somehow halfway through the Spring 2018 anime season already, and trends are now clearly starting to emerge. In the past three weeks, Boku no Hero Academia returns to prominence, Persona 5 sinks like a stone and more.

This article was written by HaXXspetten based on data provided by Zee530.

Steins;Gate 0 is still clearly the highest rated anime of the season, but the gap has closed a lot compared to where things stood three weeks ago, partially because of Boku no Hero Academia 3rd Season’s significant rise. The show has been the biggest winner in the last few weeks, going from 8.54 all the way up to 8.77, with a particularly big boost of +0.14 in its fourth episode, which also correlates with a surge of users adding it to their favorites. This is not really a surprise considering that its second season was also around these heights and in general sequels tend to reach the same scores as their predecessors or higher unless there’s a clear quality drop. The series probably just needed a bit of time for its fans to regain the same level of hype for the show as before. 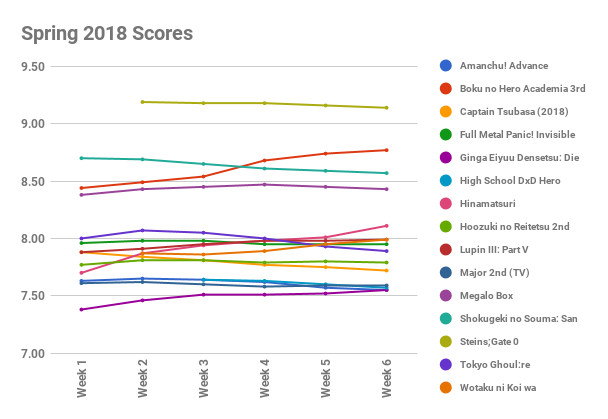 Hinamatsuri—the anime which topped the score increase charts across the season’s first three weeks—has actually managed to maintain almost the same level of momentum ever since, going up from 7.94 to 8.11. Comedy is of course always subjective, but in this case it seems to be hitting the right notes with the majority of its viewers.

Another anime that has done an incredible turnaround this season is Darling in the FranXX, which after having been in decline for the last five weeks of the Winter season has not dropped in score a single time during Spring, and has now gone up by +0.24 since the season began. It may be a controversial show, but the numbers don’t lie. 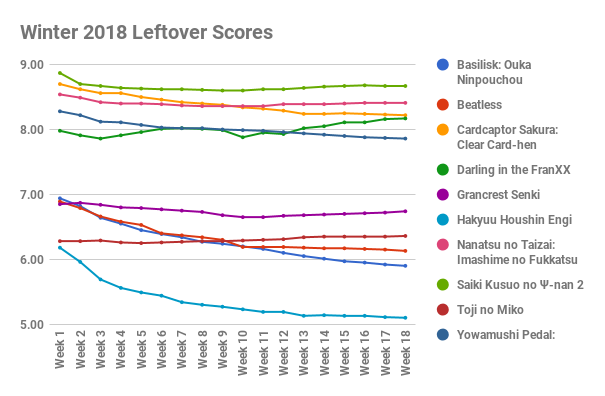 In some less cheerful news, in the past three weeks the elephant in the room on the negative side of things has been Persona 5. Since the first edition of The Seasonal Quarterly, the anime has gone from a MAL score of 7.68 in week three to 7.29 in week six. Furthermore, more than twice as many people dropped it during weeks four to six as during weeks one to three, which goes completely against the general pattern. Historically speaking video game adaptations tend to not be particularly well received by the public majority, and despite the fairly high starting score that Persona 5 had, it seems this will not turn out to be an exception to that rule either so far.

The other really noticeable disappointment lately is Tokyo Ghoul:re, which after a good score increase in its second episode has now gone straight downwards ever since, dropping four weeks in a row and with a magnitude of -0.16 in the most recent three, falling from 8.05 all the way down to 7.89. Considering how much negative reception the original series’ second season received, one can only hope that Tokyo Ghoul:re isn’t heading towards a similar fate.

Finally, Shokugeki no Souma: San no Sara – Toutsuki Ressha-hen is another sequel that can be seen slowly going downhill. Perhaps people are feeling full from it already.

Curiously enough, the magnitude of the score changes overall have decreased amongst the anime going upwards in score but increased amongst the ones going downwards. It is difficult to gauge exactly why such a general trend might be in place, but one possible guess might be that as time goes on, more and more people start giving ratings to the seasonal anime they’re watching, and thus the most excited fans that start giving high scores to their favorite shows right off the bat are starting to get counteracted by viewers with more neutral mindsets. It is merely a hypothesis but it could explain this negligible yet widespread negative phenomenon.

Kakuriyo no Yadomeshi and Rokuhoudou Yotsuiro Biyori have also managed to maintain a steady positive pace just like in the season’s opening weeks, but now one should also add Wotaku ni Koi wa Muzukashii to that list. The romantic office otaku comedy took off during the season’s fourth week and has only gone upwards since then. If it’s heading towards an eventual happy ending, let’s just hope the score can manage to reflect that too.

On the other hand, the high-flying Megalo Box seems like it might have passed its peak already as despite its very impressive starting score it has now started to fall off since episode 5. Whether this is just a temporary setback or the start of a more disappointing trend remains to be seen—after all, you never know for sure what the outcome of a boxing match is until the final bell rings.

It’s also interesting to note that despite the relatively large number of people that had put High School DxD Hero in their favorites list already when the anime started airing, that number has barely gone up at all in the weeks thereafter. This probably indicates that most people did so simply because they’re already established fans of the franchise, and that the couple of extra episodes beyond that make a relatively small difference as people have already made up their minds about the show. For the most part though, the general trend across the board is quite simply that the number of new people that add an anime to their favorites list gradually becomes smaller and smaller with every passing week.

Overall, the crazy positive trend that the opening weeks of the Spring 2018 anime season showcased has started to slow down a bit as we reach its halfway mark. For the most part though, this is still a statistically strong season with a lot of anime maintaining impressive trends, but nevertheless it is still in a good spot. While there are a couple of mishaps relative to general public expectations, they are in the minority here still. Let’s just hope the positive trend can stay on track during the season’s second half as well.