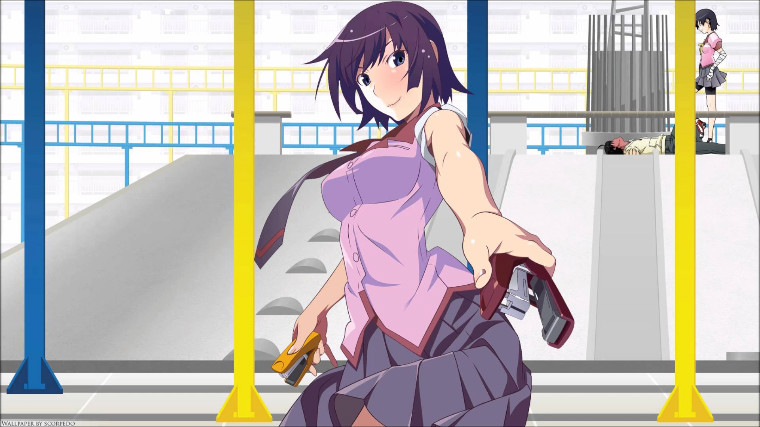 Game of Thrones is known for a number of things, most of them bloody or violent. But one thing that fans noticed was on the more artistic side of the spectrum: the opening credits change with each episode, depending on which locations are depicted in the episode.

Of course, as many anime fans know, this isn't exactly a novel idea. Anime has been experimenting with changing opening and closing credits for a while, with some interesting results. We're not talking about simple things like changing the song or animation for each season, or introducing characters by revealing silhouettes. We're talking about some major switches in every (or nearly every) episode.

This list isn't comprehensive, but it points out a few of the more memorable opening and ending sequence changes. Here are some anime OPs and EDs that you should never skip - because you might be missing out!

Bakemonogatari all openings
The opening sequences and songs of Bakemonogatari correspond to the main stories depicted within the episodes. Each story highlights the character it features, shows some of their personality, and even gives viewers a sneak preview of some critical moments (like that stapler. Ahh!).

FLCL Opening 1
Aside from its insanity, FLCL is also known for the music. Opening and closing credits are performed by The Pillows, which gives it a signature sound. The band actually contributed to one ending theme, and five different openings. Pretty impressive for an anime that only ran for six episodes.

Aria the Animation opening credits
Instead of taking two minutes out of each episode for an opening sequence, Aria plays the song right over the anime. As the opening credits run, the animation shows continuing scenes and even runs dialogue over the music. If you skip this one, you're actually skipping a part of the story (why would you want to skip that soothing OP, anyway?).

Scryed opening
Scryed changes its opening so often, it's hard to miss. Plot elements are added to the opening as they're revealed and dead characters are faded out. There are even a few different versions of the opening song: which version plays depends on which character takes the lead in the upcoming episode.

Mahou Shoujo Madoka Magica OP
Madoka is a mind-bending and symbolic anime, and it continues to play with our perception even in the opening credits. These are by far the most subtle changes on this list, of the blink-and-you-miss-them variety. A few confirmed changes: a beam of light appears in later opening sequences, and Madoka's transformation sequence changes a bit. Don't strain your eyes trying to find more changes if you own the DVD: they weren't carried over to the DVD release.

Akuma no Riddle ending 1
Akume no Riddle is probably the most dramatic example of this: each credit sequence in this 12 episode series is completely different. The credits put a new character into the spotlight each time. Even the music and style changes for each ending: check out ending number 9, and the ending to episode 8. Wow, are these even from the same anime?

Danganronpa Ending 1
Need some help remembering which characters bit the dust in Danganronpa? Just keep an eye on the ending credits. The ending zooms out slowly from an image of the main characters, to reveal every character that has died up until this point. Imagine if GoT did that...

Sore ga Seiyuu ending credits 1
How much information can an anime stuff into an ending sequence? Quite a lot, as Sore ga Seiyuu demonstrates! The ending credits start the same each time. But keep watching, and you get to see the three protagonists banter about what happened to them in the episode, sing some karaoke from famous anime, and even recap the episode.

Infinite Stratos Ending
The ending credits literally evolve as this series progresses, adding more and more characters to the running lineup. Listen closely and you'll notice that the song is actually sang by the characters shown on screen, taking the song from a duet, to a full ensemble by episode 6.

Lucky Star Ending 3
Much in the way Aria continues to play through the opening sequence, Lucky Star keeps the show going after the end credits roll. Instead of animating the characters talking though, we get a view of a closed door. Behind it, the characters engage in their typical silly conversations, and take turns singing karaoke.

Idolmaster ending
The Idolm@ster pulls the same trick as Akuma no Riddle, using different endings for each character. Completely different songs act as the backdrop for animation and stills that reveal a little more depth to each character.