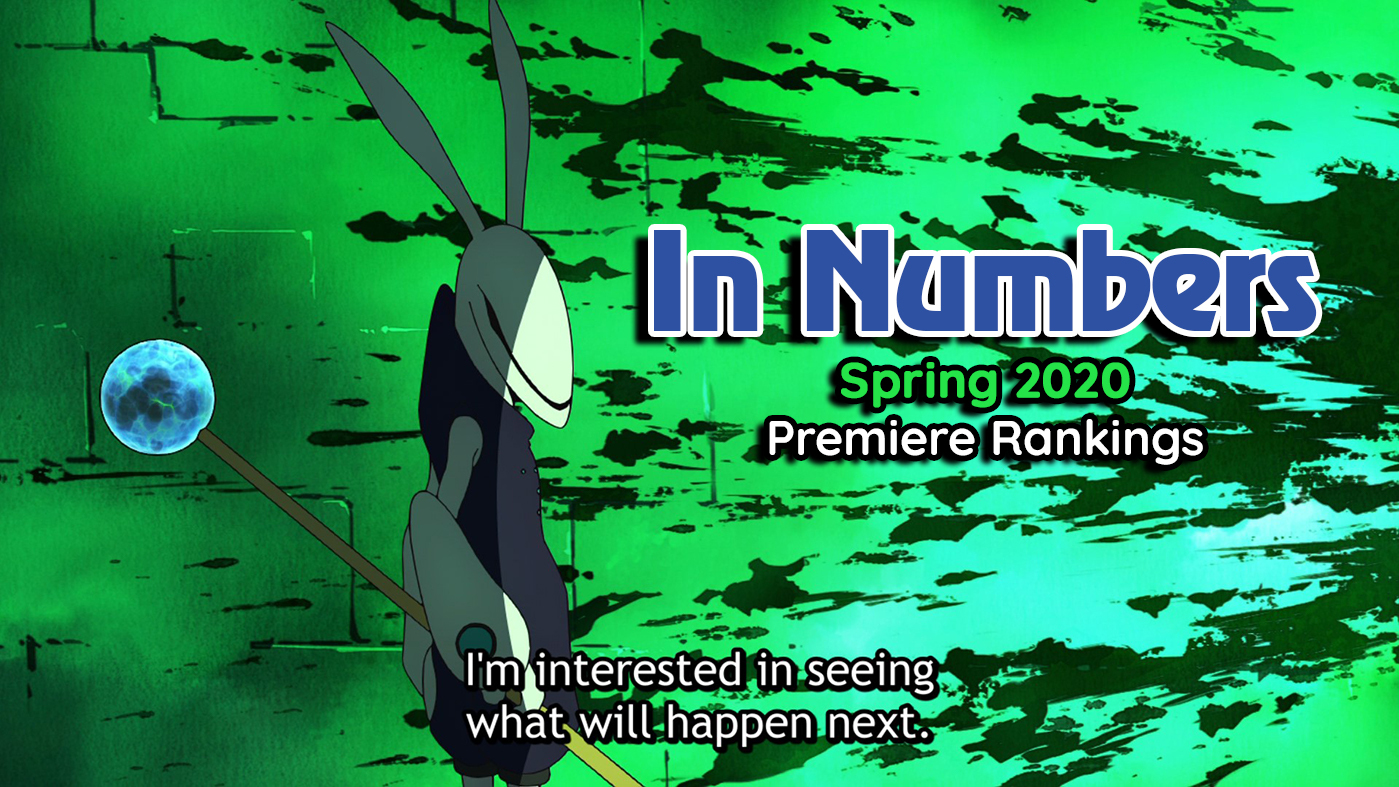 Re:Zero kara Hajimeru Isekai Seikatsu 2nd Season, Yahari Ore no Seishun Love Comedy wa Machigatteiru. Kan, Sword Art Online: Alicization - War of Underworld 2nd Season—Spring 2020 was meant to be the season that really broke in the new decade with a bang, but alas, the universe had other plans. Though many of the big players left the field before the game even began, there are still plenty of fresh anime to look forward to (and a few to maybe avoid), ranging from highly-anticipated adaptations to mixed-media shorts.

Here's just a short summary of how the first episodes of 35 new shows fared in Spring 2020!

Data courtesy of anime-stats.net, metamal.pro, and myanimelist.net (self-collected), all of which is public info.

In order to effectively curb the barrage of premieres in a consistent manner, only shows with a legal simulcast are included. This most notably excludes BNA, which would already have caused problems with its six-episode debut, so it works out. Though not available legally, a high volume of users watched Appare-Ranman!'s first episode when it debuted a few weeks earlier than its broadcast date. The show is still included, but it's been marked with a * to help us keep note of that factor. 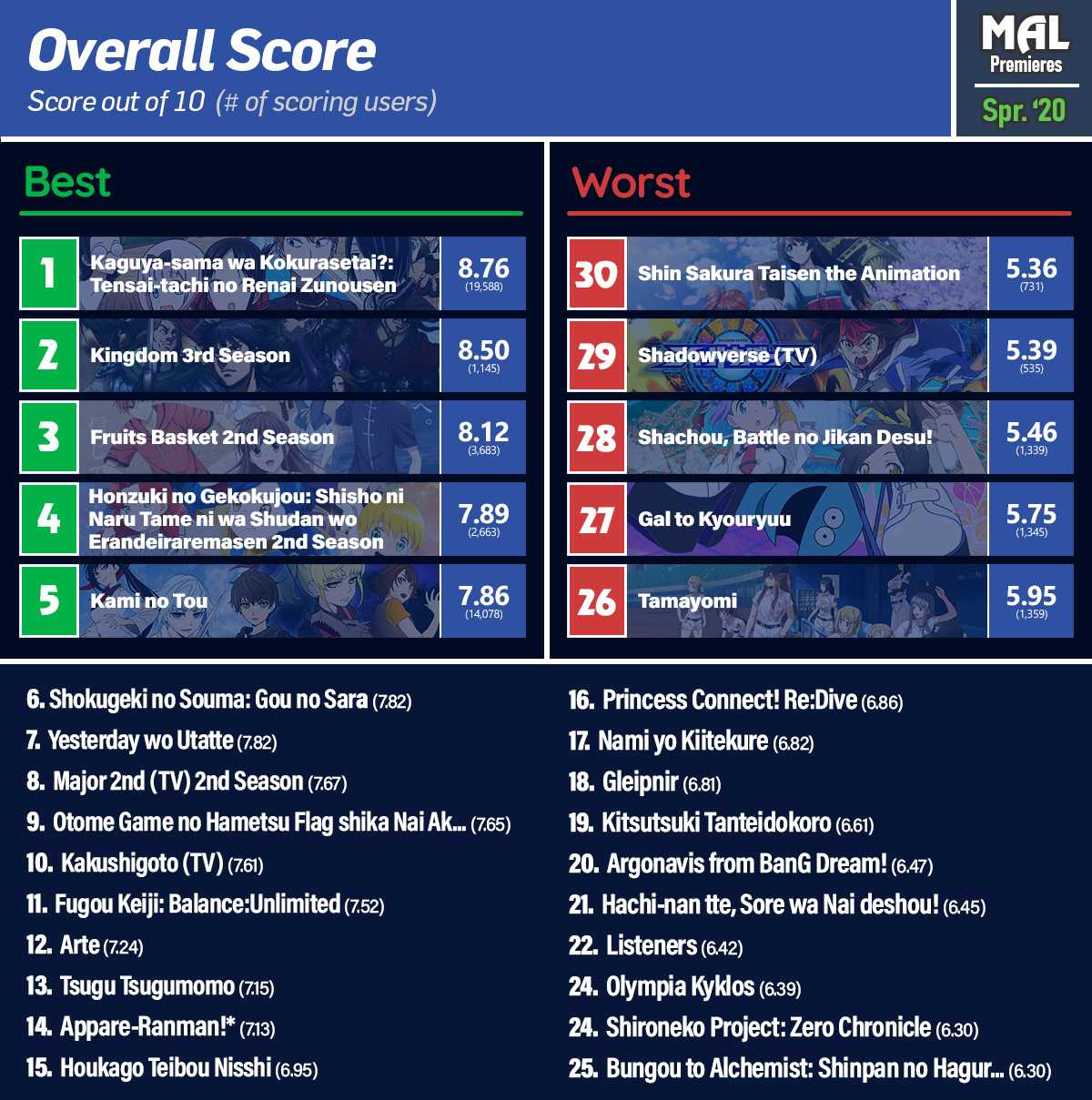 Of course, we start with the obvious: overall score. Sequels have a natural advantage because they start with a more dedicated audience, but that didn't stop Kami no Tou from pinching the #5 spot away from Shokugeki no Souma: Gou no Sara, which started out with a score several points below those of all its past seasons. Kami no Tou and Tamayomi debuted together to officially open the season, and even in overall score, they're still paired together. The second season of Honzuki no Gekokujou is starting out at a whole 1.10 points higher than where its predecessor began in Fall 2019, but still below season one's current score of 8.06. That trend continues with Kaguya-sama wa Kokurasetai?: Tensai-tachi no Renai Zunousen and Kingdom 3rd Season, but Fruits Basket 2nd Season went the opposite way. 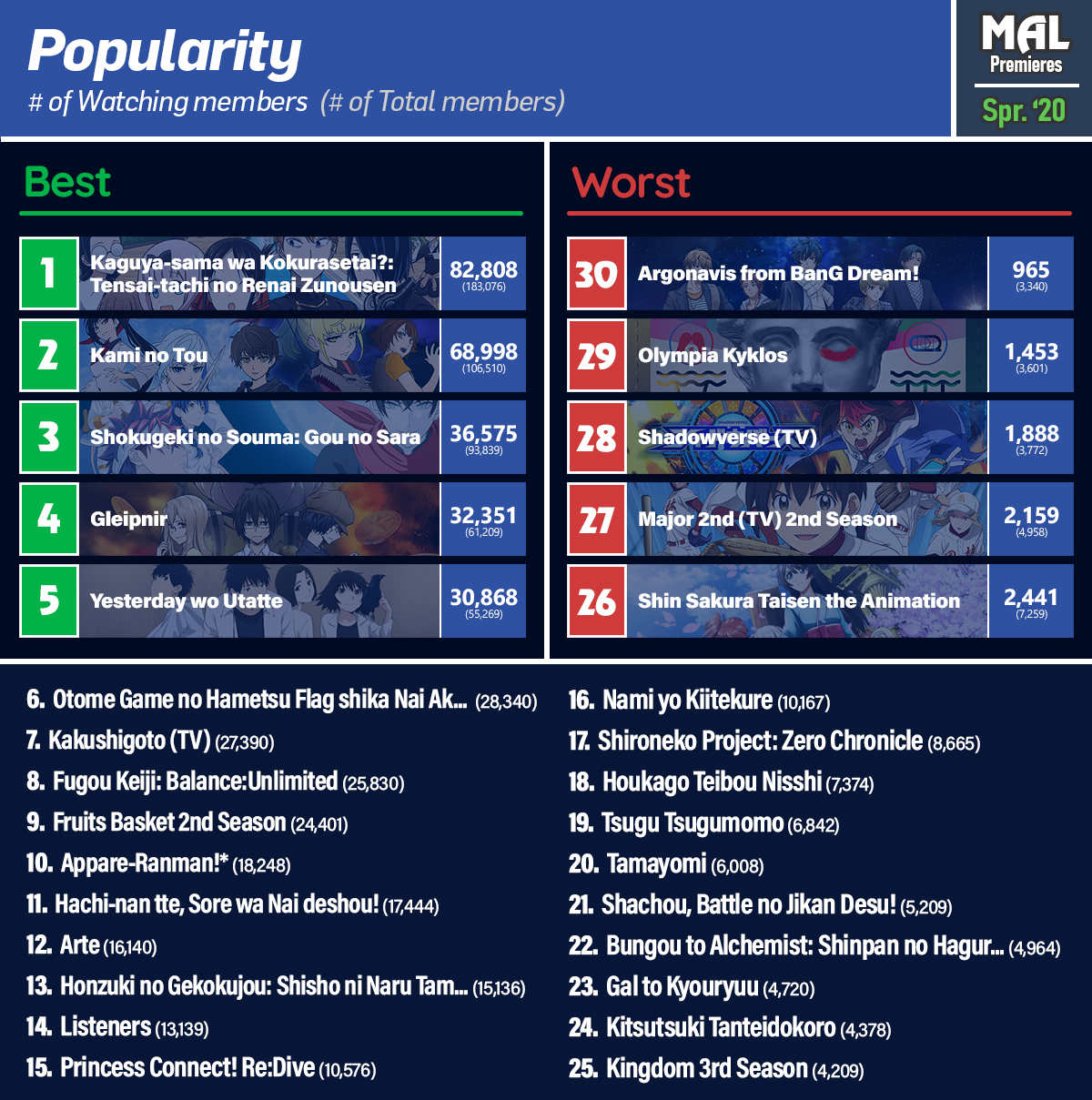 And now, the other obvious statistic: popularity, measured by the number of Watching members. It's unfortunate that we can't compare with the other big-ticket sequels we would've otherwise had, but #1 rightfully belongs to Kaguya-sama wa Kokurasetai?: Tensai-tachi no Renai Zunousen. That being said, at the time of writing, Kami no Tou has sped past Kaguya-sama to become the most-watched show this season by over ten thousand members. They're in their own league compared to every other show, though.

It's a little hard to tell what's significant and what isn't from these numbers, so let's take a look at something that can tell us that. 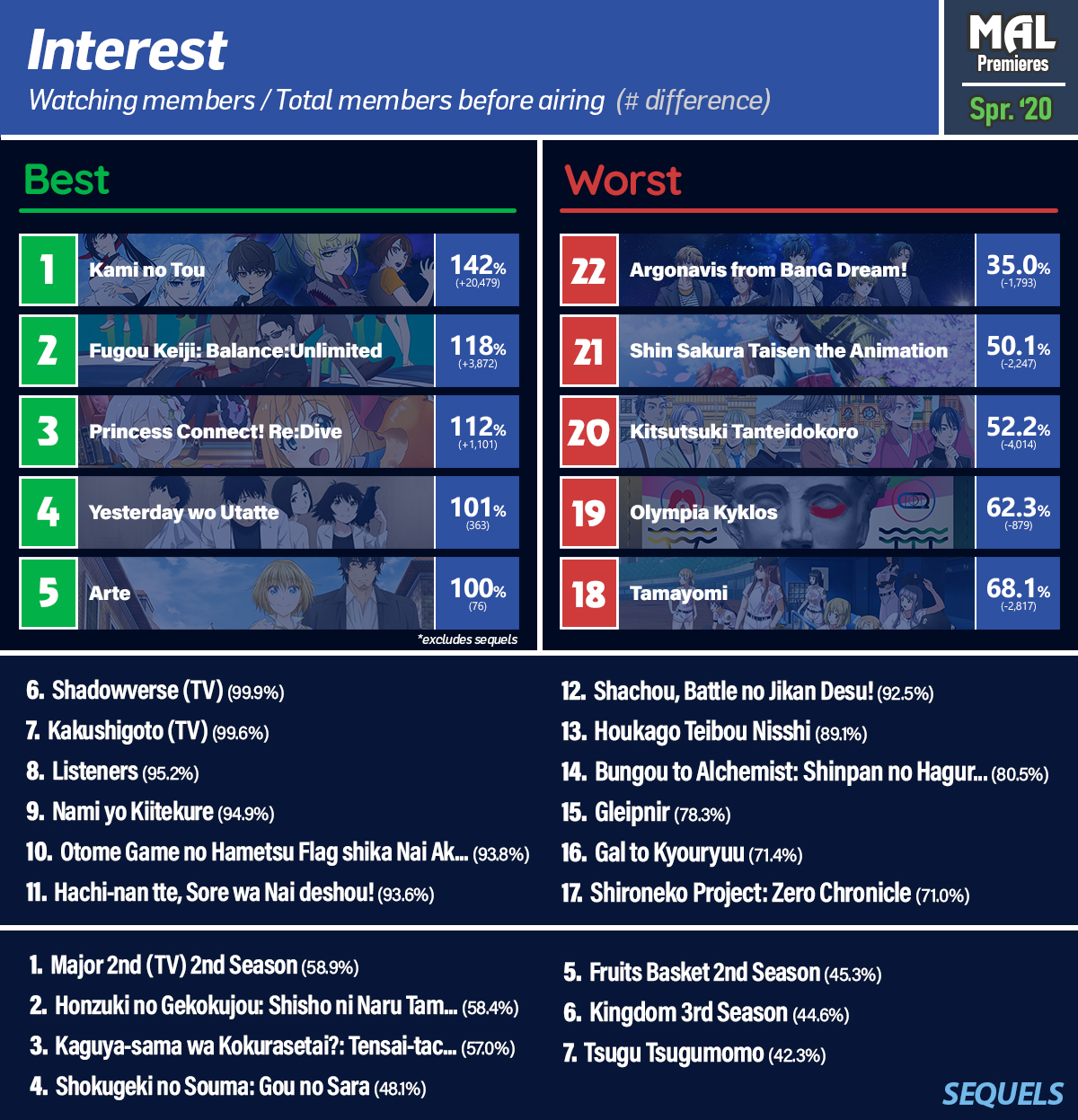 "Interest", a category title I pondered over for an hour, roughly measures how much of an "oh wow, this flew under my radar" or "I HAVE to start watching this" impact the various premieres had. Judging from the general discourse around these shows, I'd say the numbers represent that perfectly. Kami no Tou already had 48,519 Plan to Watch members at rank #4 just prior to airing, but it kept on climbing and climbing that tower after the first episode's debut—Crunchyroll's marketing blitz at work, folks.

Just below it are arguably the biggest surprise hits of Spring 2020: Fugou Keiji: Balance:Unlimited and Princess Connect! Re:Dive, which weren't even in the top 10 for Plan to Watch members at the start of the season. The former gifted Husbando of the Year to the internet, and the latter delivered diet KonoSuba with surprisingly top-notch animation. Meanwhile, with smaller dedicated userbases, Major 2nd and Honzuki no Gekokujou had the highest rate of Interest among sequels. 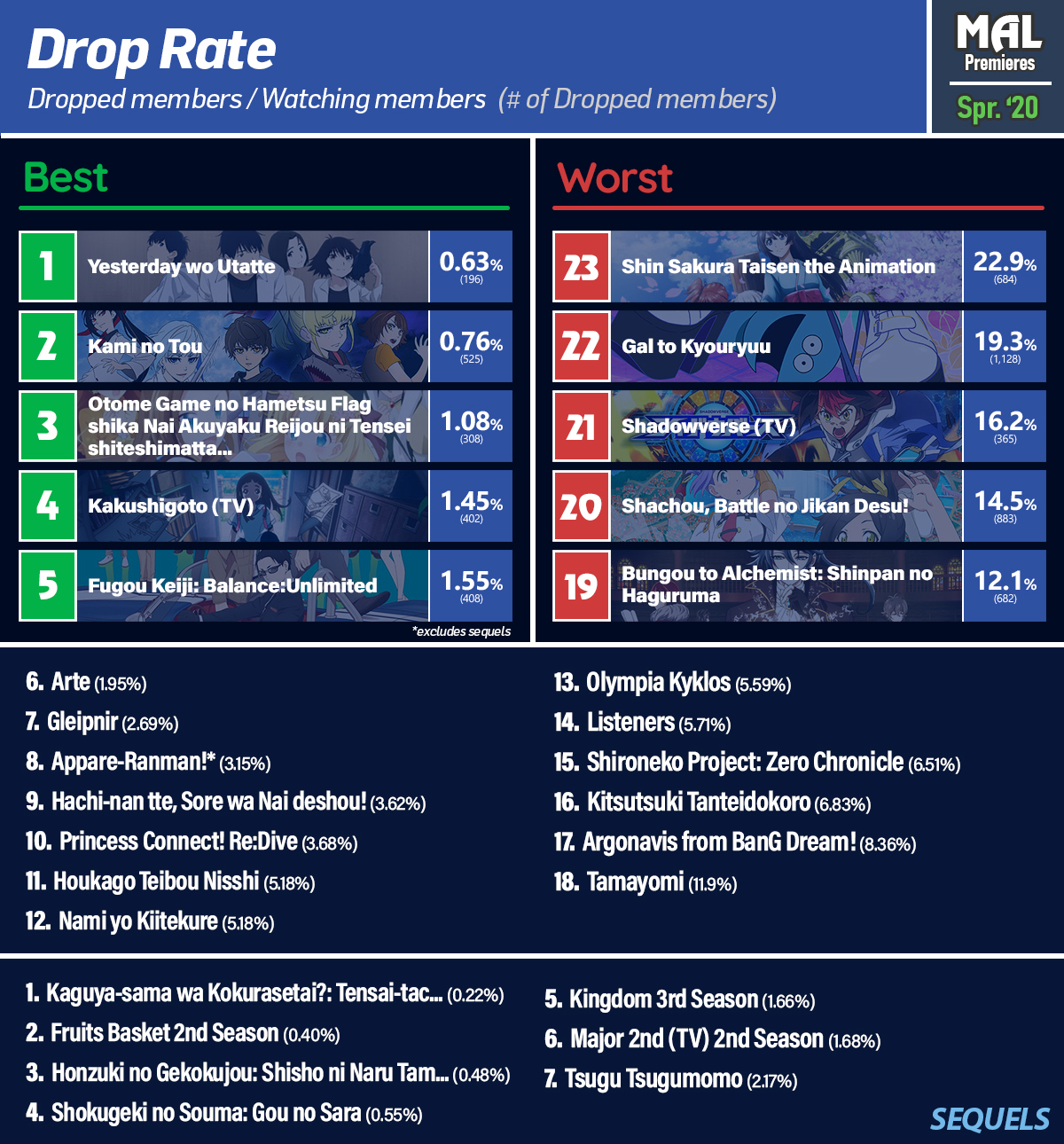 Not everyone follows the tried-and-true three-episode rule—sometimes an anime has such a bad start that it needs to be dropped immediately. 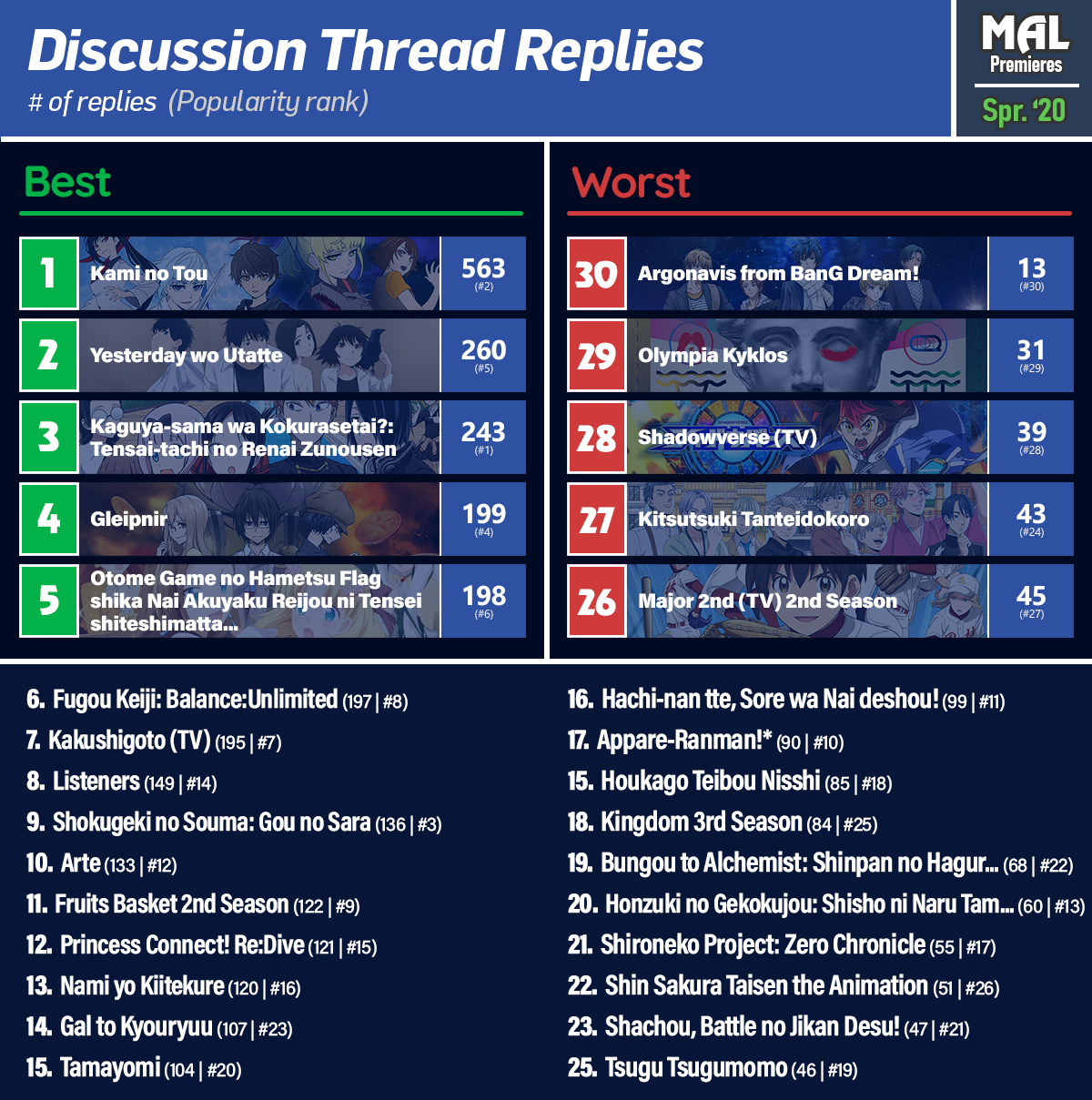 The number of Watching members isn't the only way to measure the popularity or impact of an anime. The number of episode discussion thread replies a show received can tell stories of hype, controversy, or something in-between.

I know I've already discussed Kami no Tou a lot, but its premiere performance is seriously off the charts. With just one episode, it shattered the record for most episode discussion thread replies, which I started recording last year... by exactly 200 replies. I can't wait to see what its average is when the season is over.

Yesterday wo Utatte came out swinging again at #2, three spots higher than its Popularity rank. In the lower bracket, the largest difference between ranks belongs to Gal to Kyouryuu, which is no surprise considering you can't help but NEED to talk to someone after you finish it.