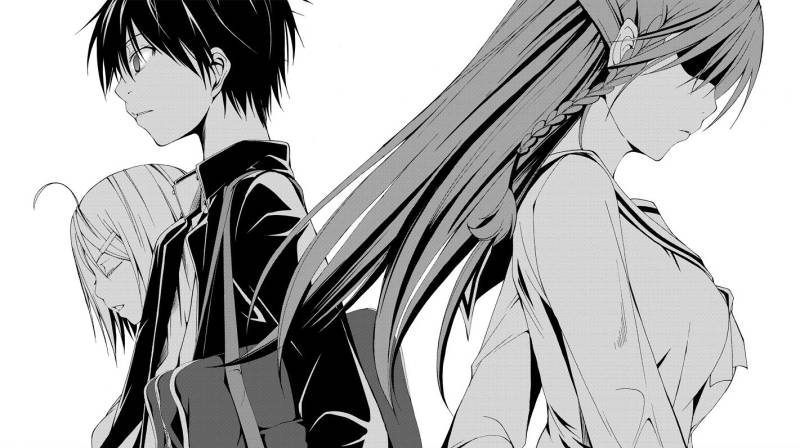 Polyamorous relationships seem to be gaining traction in progressive Western societies, while polygyny is practiced in many developing countries, and during ancient times. This is due to the patriarchal social structure that's in place in much of the world. Polyandry on the other hand is actually illegal, but still practiced by a tiny subset of the population on the low-down. However, in egalitarian societies it's not uncommon for people of various sexual orientations to explore open relationships, and openly have more than one sexual partner.

One of the cool aspects of manga is the amount of diverse themes that are explored. So, it was only a matter of time that a genre of manga would appear which would cover polyamorous relationships. Many of these are comical in nature, while others take a more serious tone. Though let's not kid ourselves that harem manga exists for any other purpose than satisfying a common male fantasy. But forget all that! They're bound to get our imaginations running wild, as we ponder what it would be like if we had our own harem of adoring lovers! 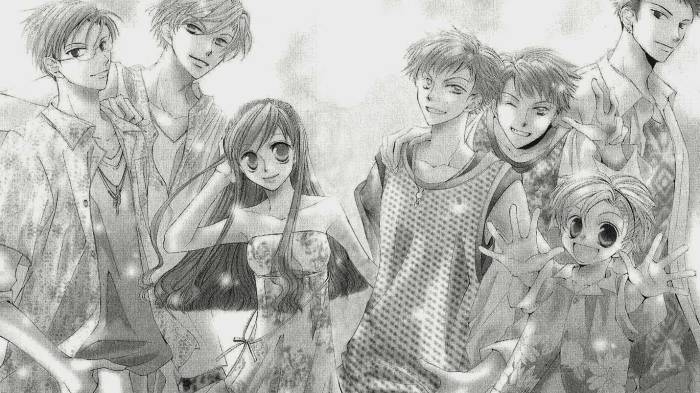 Haruhi Fujioka leads a somewhat unconventional life. She’s a freshman who attends a prestigious high school, but is mistaken for a boy at the Host Club after she cuts her hair short. Which is rather ironic, as her dad is a cross dresser!

We’re willing to bet that Haruhi’s commoner background makes her stand out from the wealthy crowd at the Host Club. Then again, she’s bound to get caught up in all sort of crazy and even romantic situations anyway when she’s surrounded by guys such as Mitsukuni Haninozuka, Kyouya Ootori, Takashi Morinozuka, Tamaki Suou, Kaoru and Hikaru Hitachiin. 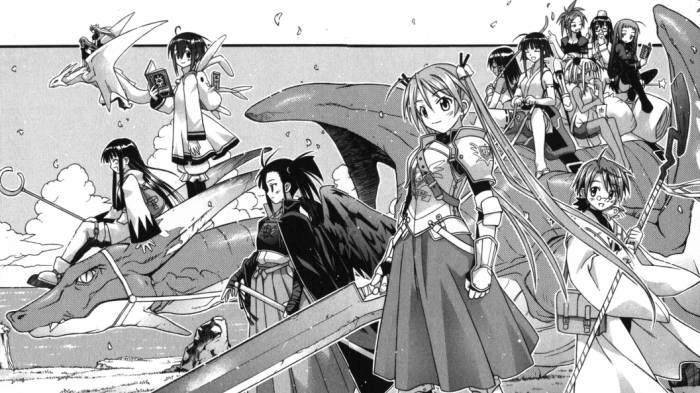 A harem manga with a dash of Harry Potter sounds like an interesting proposition. Mahou Sensei Negima! brings us an enchanting world filled with magic and tons of cute girls!

Negi Springfield is a young wizard who’s filled with purpose, and sets outs on a grand adventure which will prove challenging. He’s out to find his missing father while also fulfilling his lifelong goal of becoming a Magister Magi. He’s a teacher at the Mahora Academy, and grows closer to Asuna Kagurazaka who is one of the new students in the all-girls class. 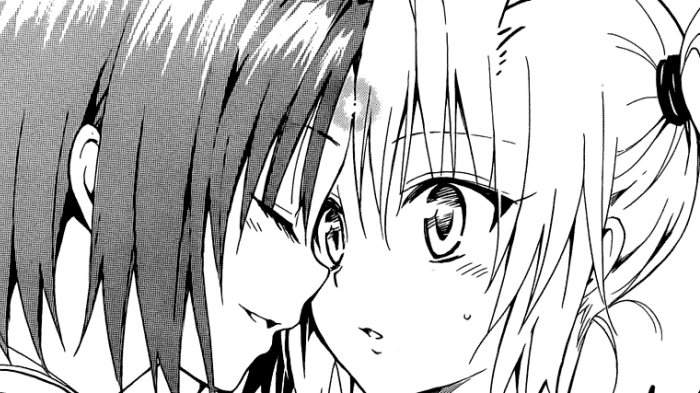 To LOVE-Ru is a popular romance, ecchi and harem manga which was more than deserving of a sequel. To LOVE-Ru Darkness cranks up the crazy, comical and downright perverted situations that lead male character - Rito Yuuki – finds himself in. But when he’s surrounded by the incredibly cute and sexy alien sisters: Lala Satalin, Nana Astar and Momo Belia Deviluke, then I don’t think he’s likely to complain.

There’s one problem, Golden Darkness is out to assassinate Rito. Will he be able to avoid this grim fate? 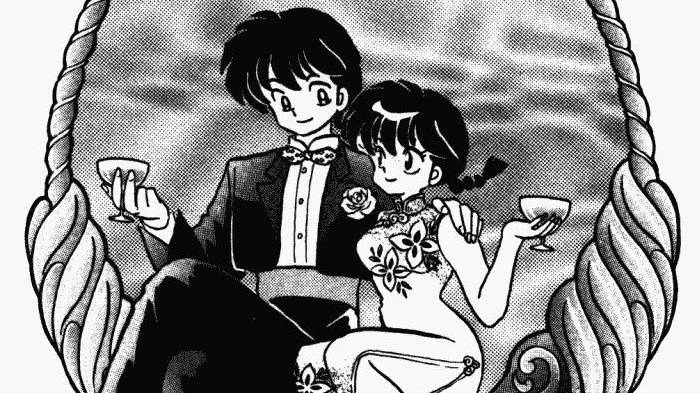 Rumiko Takashi is a manga artist who certainly has an affinity for the romance and comedy genres. Ranma ½ follows in that fine tradition, but also includes a bit of a gender bender twist. The lead character, Ranma is a martial artist who transforms into a girl whenever he comes into contact with cold water, after he fell into a cursed spring.

And if you thought that would make life complicated for Ranma, well, things get crazier as he becomes engaged to more than one girl. 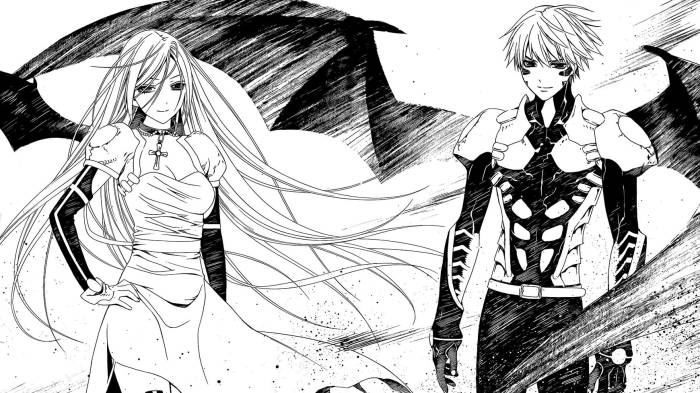 So you finished reading the excellent Rosario to Vampire manga and can't wait to continue the adventure. The sequel builds on what made the original series so good. Fans will be glad to know that lead characters - Tsukune Aono and Moka Akashiya - return for another action-packed saga. However, the ecchi and harem elements are subdued when compared to the prequel. Then again, some folks prefer it this way as it's more tastefully done. 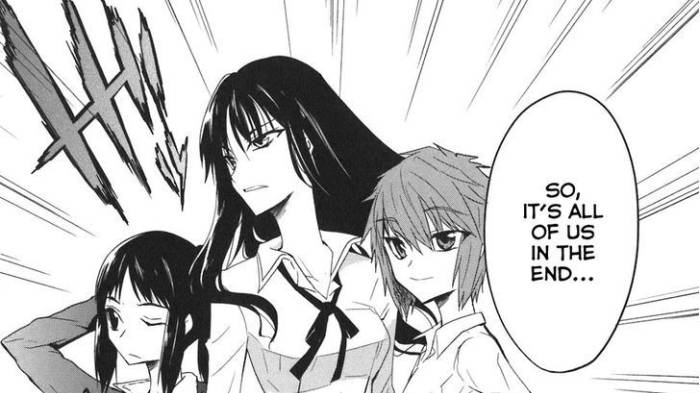 Kenji Kazama fancies himself a badass delinquent at his high school. However, it’s more posturing than anything else. He soon discovers that Chitose Karasuyama, Sakura Mizukami, Roka Shibasaki and Takao from the Game Creation Club are a lot tougher and stronger than him. He joins the club, but he might get more than he bargained for! 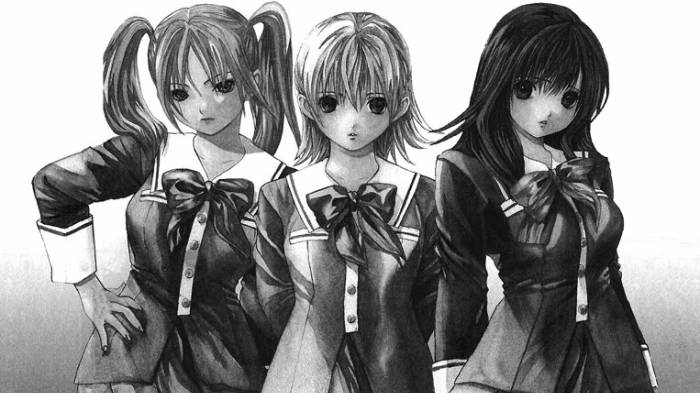 If you’re looking to dig into a hilarious harem manga with plenty of ecchi and tons of fanservice, then you just can’t go wrong with Ichigo 100%. Junpei Manaka is your typical lovable loser who’s mesmerized by the many beautiful girls he encounters during the course of the series. 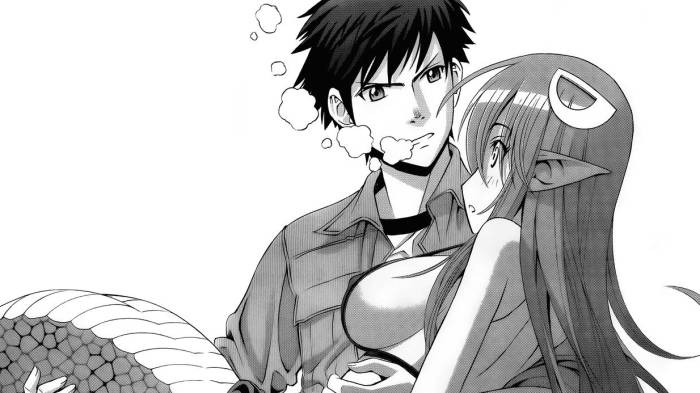 Societies across the globe are becoming ever more diverse. People from different backgrounds are meeting, falling in love and starting families. But have you ever thought what it would be like if humans encountered a totally different species...let’s say…monsters?

Yup, that sounds frigging insane! However, that’s the crazy world that Monster Musume: Everyday Life With Monster Girls explores. Kurusu Kimihito takes part in a zany cultural exchange program organized by the government. At first the sexy snake-like lamia, Miia moves in to live with him, and he must take care of her. Things don’t end there though - a harpy and centaur girl later move in - making Kurusu struggle to contain himself as sexual contact between the two races is prohibited! 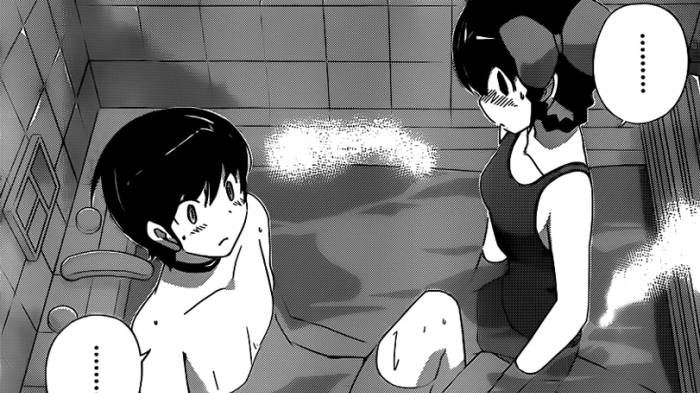 So you might think that you rock at visual novels, dating sims and various other video games. However, Keima Katsuragi is on a whole other level, his dating sim skills are unparalleled. He’s able to capture all the girl characters in such games, but thinks little of girls in the real world.

One day, he applies for a job which requires him to capture runaway spirits that reside in real girls. Unfortunately, he’s duped as this job offer comes straight from Hell and he’ll lose his head if he tries to back out! 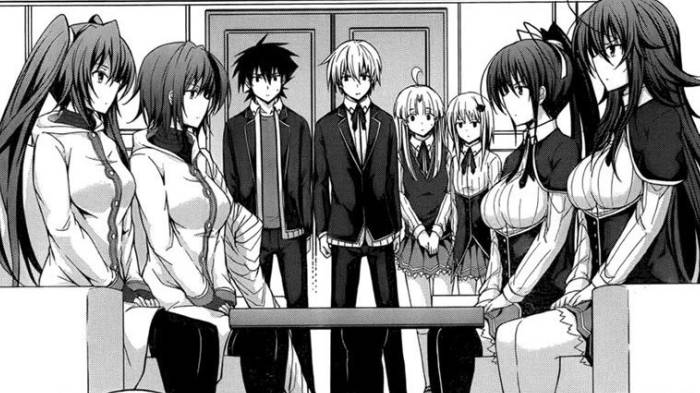 Issei Hyoudou is someone you’ll initially feel sorry for, as he’s offed by his girlfriend who happens to be a fallen angel. But he’s then revived as a devil to serve under the sexy Rias Gremory who’s ranked as a King Devil of the Gremory Clan.

Issei's love life definitely takes a turn for the better, and as the series progresses Rias falls in love with him and the two of them become an item. However, things don’t end there - this is a harem manga after all – and Issei is pursued by several beauties who have the hots for him as well! 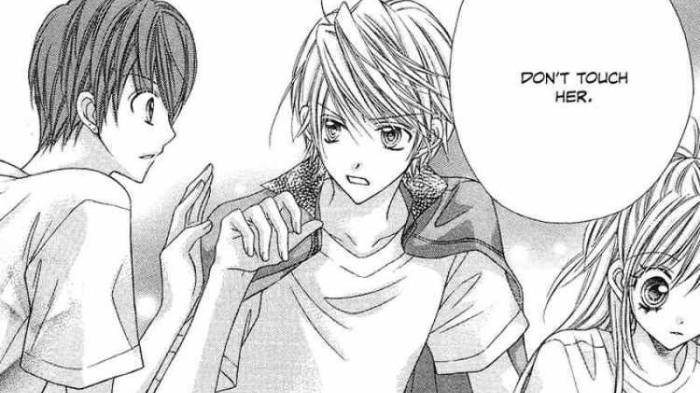 With a title like that, you might think that this harem manga may have something to do with rock music. Instead, it’s a story about Sawa Konishi who attends a formerly all-boys high school and experiences quite a bit of drama. The boys there don’t treat her well and bully her around. Eventually, she starts befriending a few of them and develops a relationship with Ran Matsuyuki. But will it last? After all, Ran is rather spoiled and self-absorbed and she’s surrounded by plenty of guys. 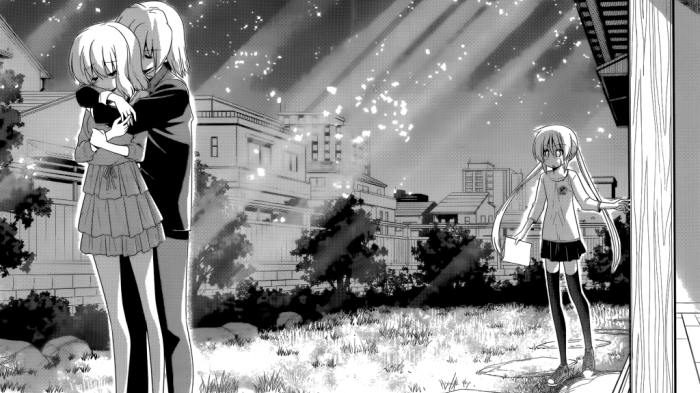 Plenty of harem manga end up getting a little ambitious with the story and try - and fail - to be somethings it's not. Hayate The Combat Butler doesn’t hold such illusions, and is instead an over-the-top manga that’s pure slapstick.

Hayate Ayasaki finds himself in all sorts of crazy and hilarious situations. Fortunately, his selflessness puts him in a position where he becomes a butler for the wealthy Nagi. However, he’s not good at figuring out when girls have feelings for him which results in plenty of comical moments. 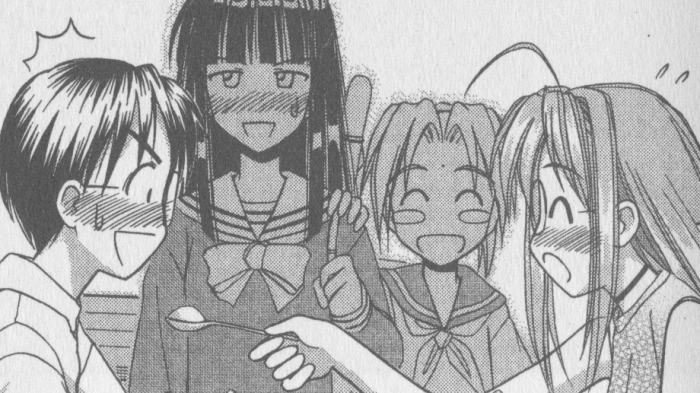 Most Western manga fans got their first taste of the harem genre through the critically acclaimed Love Hina series. And it’s easy to see why it’s so highly-regarded - the expressive artwork and amiable characters make it a winner!

The plot is pretty cool too. Keitarou Urashima is trying to pass exams to get into Tokyo University but is easily distracted and has bad studying habits. And when his grandmother gives him ownership of her inn, which is actually an all-girls’ dorm, we’re pretty sure studying won’t be his main priority. Nevertheless, his clumsiness is sure to drive Naru Narusegawa and the other girls up the wall. But we're also sure there'll be some tender moments as well. 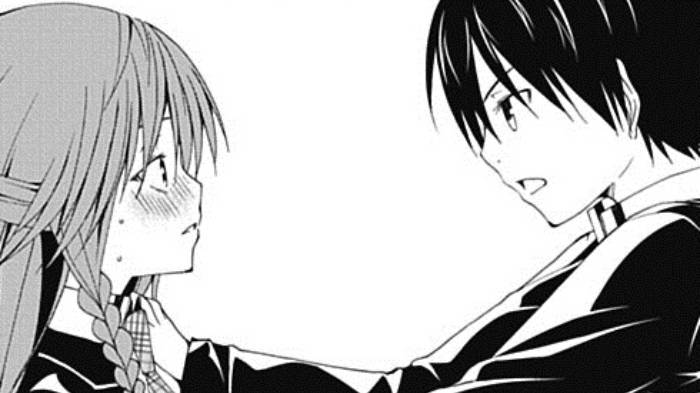 Hey, we love ecchi and harem manga just like the next manga fan. However, when fantasy, supernatural and magic themes are included as part of the total package, well then, that just sweetens the deal!

Arata Kasuga is an ordinary guy who’s a bit of a perv. One day a supernatural disaster destroys his town, and then meets Lilith Asami who introduces him to the world of magic. He decides to become a magus, and thus, encounters the various beautiful and multi-talented girls of Trinity Seven.

But will Arata be able to keep his lascivious impulses under control? 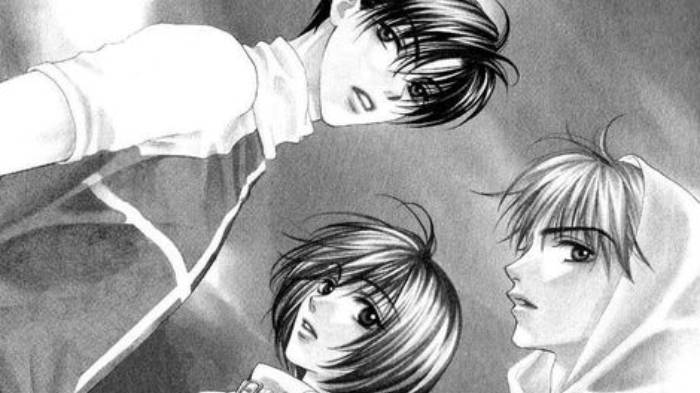 A running theme in this harem manga list is the gender bender. And hey, there’s nothing wrong with that as characters assuming different gender roles helps to spice things up a tad.

Mizuki Ashiya is a cute Japanese-American track-and-field athlete who transfers to an all-boys’ high school. So she disguises herself as a boy – but will she able to keep her true identity secret when she’s in such close proximity to a bunch of dreamy guys?!

It must be one of those unwritten laws that you just can't have enough harem manga. So here's a few more to keep you dreaming and desiring your own harem! 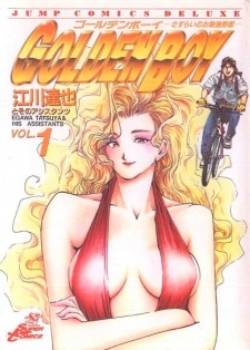 Kintarou Ooe comes across as rather goofy whenever he encounters a beautiful woman during his adventures. Seldom do most of these women show much interest in him initially, but when they get to know him better they realize that there's something special about him.

Will Kintarou find true love and settle down, or will he end up a perpetual student of life as he travels on his bike to the next destination? 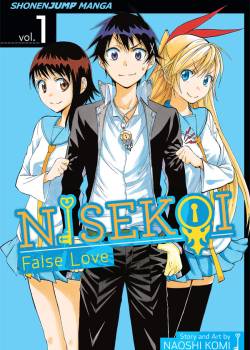 You just can't help but feel some sympathy for Raku Ichijou as he tries to distance himself from his yakuza background, and pursue an idyllic relationship with a childhood sweetheart he's since lost touch with. But things don't exactly turn out that way, as he's dragged into a relationship with Chitoge Kirisaki of a rival gang who he simply doesn't get along with. 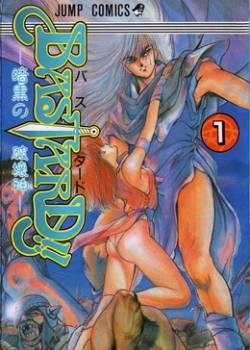 Did you agree? Don't forget to check out our Harem Manga/Harem Anime genre page on MAL, as well as Top 20 Best Harem Anime!