Girls are said to be the most loving beings in existence, something that is true in real life and in anime. So what about girls who love other girls? Well that, my friends, is the definition of yuri anime. From just friends to more than friends, here are 20 of the best yuri anime of all time.

Yuri anime are more than just girl on girl action! Come check out 20 of the most popular yuri anime of all time! 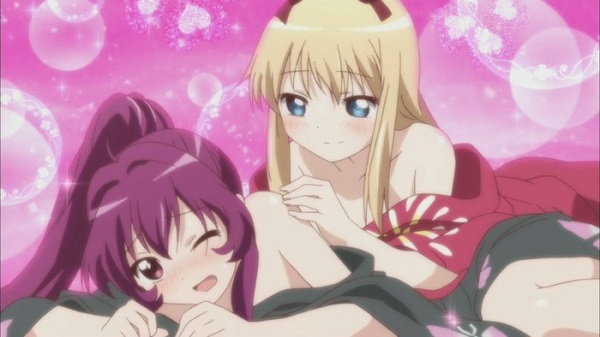 This isn't one of those shows further down the list that deals with serious romance. Yuru Yuri is about a group of middle school girls who form an "Amusement Club" for the sole purpose of having fun. Most of the time, "fun" involves perving on and trying to kiss each other, sort of like a fluffy lesbian version of Kitakubu Katsudou Kiroku. If wall-to-wall-cuteness is your thing, check it out! 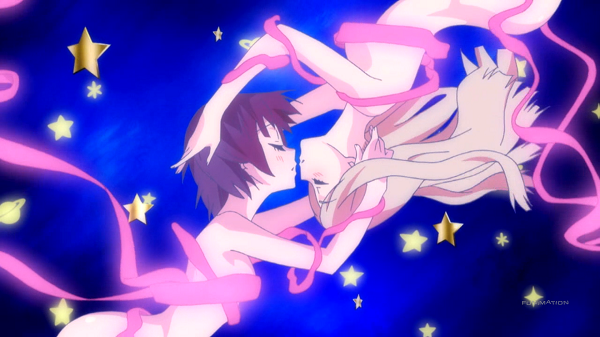 Roughly translated: "Lesbian Bear Storm." Boasting the greatest anime title ever, this show is the most recent project of Kunihiko Ikuhara, famous for his yuri series (another of which appears on this list). Unlike many mainstream yuri, Yuri Kuma Arashi deals with homophobia and features a protagonist who must keep her romance secret. Oh, and space bears invade Earth to eat girls. How does one have any bearing on the other? Find out in this grizzly, polarizing tale! 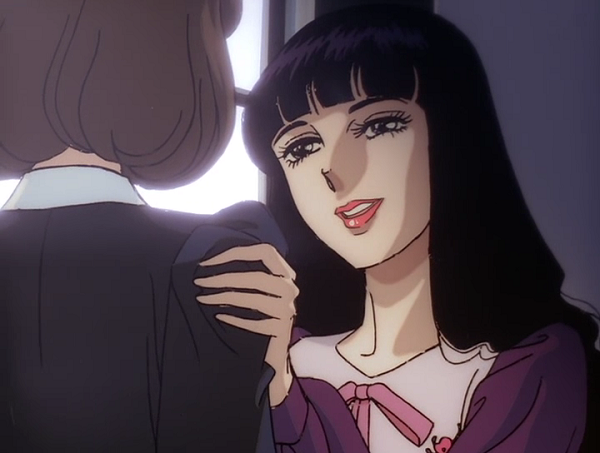 One of the older yuri/shoujo ai works in this article, this anime is made by the same Tezuka Productions of Astro Boy fame. The older brother in question is main character Nanako's tutor, who she takes a shine to, and continues to write to throughout her stint in an all girls school, where she gets to know and even falls for the most popular girls. 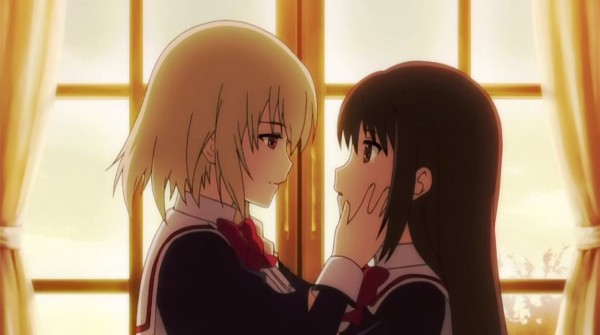 The OVA sequel of a harem anime with different main characters, this technically isn't a yuri or shoujo ai seeing as the main character is yet another pretty guy dressed up as a pretty girl. Nevertheless, seeing the cute main character who has a phobia towards his own sex learn how to navigate being and being around women is really entertaining! 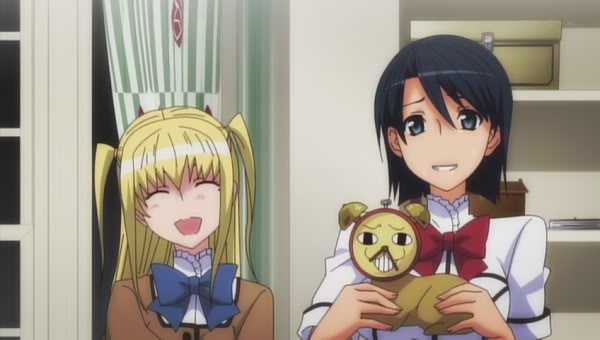 Kanako Miyamae hates boys. She breaks out in hives just being near them! She transfers to an all-girl school to find the perfect girlfriend, but her roommate isn't the pretty freshman she appears to be. On top of that, the popular and beautiful Ryuuken Ishima befriends her, making the whole school jealous! Can the perpetually single Kanako find love and navigate her roommate's intricate schemes? 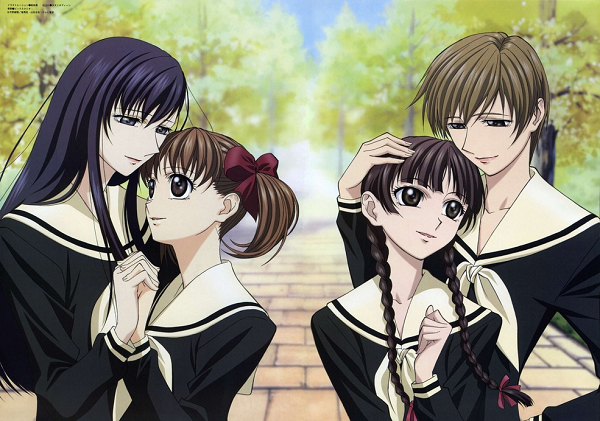 Another yuri anime with "Maria" in the title, Maria Watches Over Us is one of the more iconic older yuri/shoujo ai series. The characters of this shoujo ai all attend Lillian Girl's Academy, a highly prestigious all-girl Catholic school. The students are well-known for being well bred and have impeccable manners. What's unique to this school is that it utilizes a souer (sister) system, in which an upperclassman may pick a younger student to mentor. Needless to say, this sisterly relationship often develops into much more!

Main character Mai Tokiha discovers that she is a HiME, tasked with battling the demonic Orphans at her high school. This show famously put a dark spin on the magical girl genre even before Puella Magi Madoka Magica, and reflects the personalities and pain of its main characters in their unique weapons. Their life-threatening situation draws the HiMEs closer, for friendship and fanservice alike. 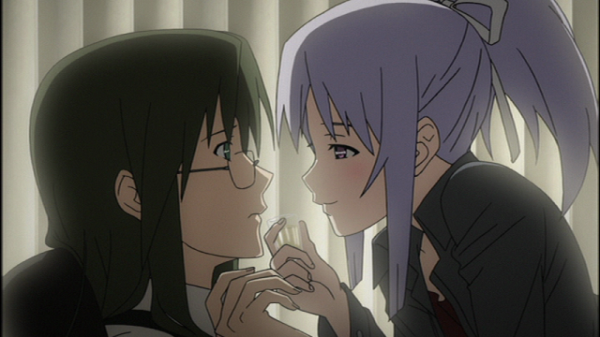 Fed up with all the cuteness? Take a hard 90-degree turn at Mnemosyne. Rin Asogi is a supernatural detective who hunts down bloodthirsty creatures known as "Angels." She's ambiguously in a relationship with her secretary, and frequently sleeps with contacts for information. Rin's immortality allows her to take all kinds of punishment, whether she's drinking or fighting; add it all up and you have a wild, booze-soaked horror mystery chock-full of sex and violence.

Kannazuki no Miko (Destiny of the Shrine Maiden) 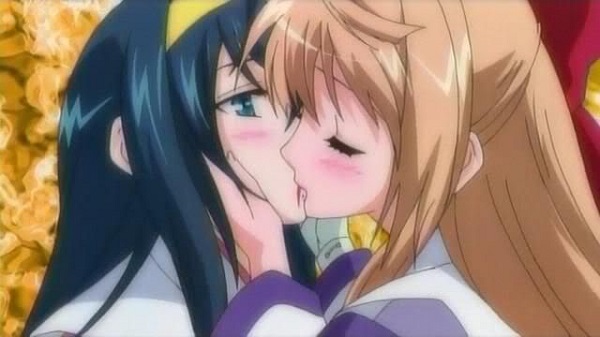 Himeko Kurusugawa and Chikane Himemiya are a schoolgirl couple with a dangerous destiny: they are the reincarnated shrine maidens of the Sun and Moon, tasked with defending the world from the evil serpent Orochi. Kannazuki no Miko blends ancient legend with futuristic mecha battles, all swirled around a story of star-crossed lesbian lovers who meet again and again throughout history. 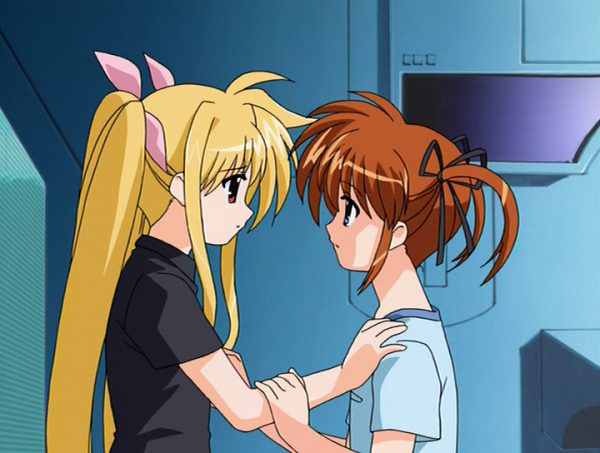 Magical Girl Lyrical Nanoha is a magical girl anime aimed at young adult men, with adorable little girls engaging in high-powered magical battles—always a winning combination! But the core of the series is the relationship between young Nanoha and Fate Testarossa, her rival on her quest for the mighty Jewel Seeds. When Nanoha notices that Fate seems unhappy, she resolves to find out why, starting a chain of events that leads to a powerful friendship that carries on through several sequels. 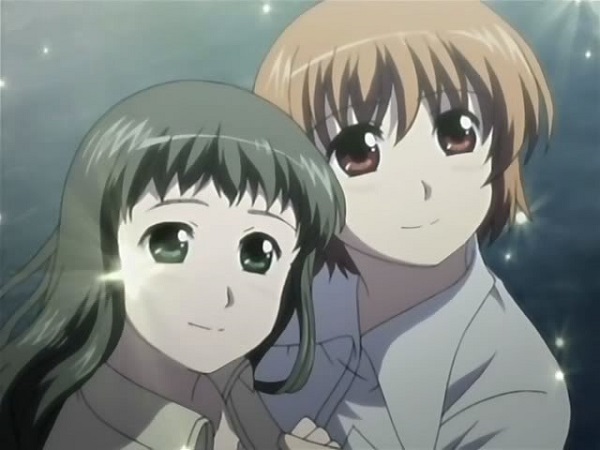 It starts with one of the unluckiest love confessions this side of Katawa Shoujo: timid Hazumu gets rejected, and shortly thereafter a spaceship crash-lands on top of him. Advanced alien technology brings him back—as a girl! A yuri love triangle springs up between Hamazu, her would-be girlfriend, and her childhood friend. The animation is as soft as the romance, all the way up to its neat and tidy happily-ever-after. 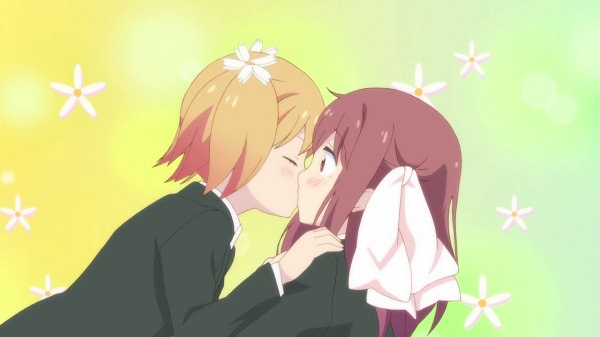 Yuu Sonoda and Haruka Takayama fear they will grow apart now that they've reached high school. How do they keep their friendship strong? Take it to the next level! Yuu and Haruka start kissing in secret as a sign of their relationship, but has it become something more? The answer isn't as obvious as it appears to be—not to our main couple, and especially not to their curious friends and parents. Looking for yuri fluff? Look no further! 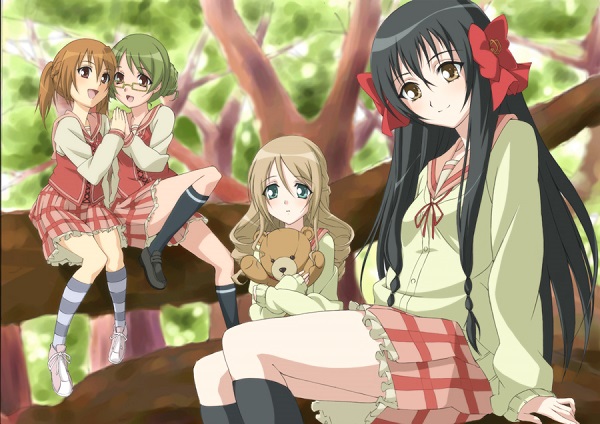 There's a whole genre of "seinen yuri"—male-targeted stories that deal in idealized cuteness and femininity, generally in teenage girls. Like Sakura Trick, Strawberry Panic!—set at an all-girl Catholic school complex—unabashedly subscribes to this. Its artists determined the pairings by polling the readers, resulting in manga, light novels, and later an anime that mix absurd melodrama with student council politics. It parodies syrupy schoolgirl romance as much as it plays it straight. 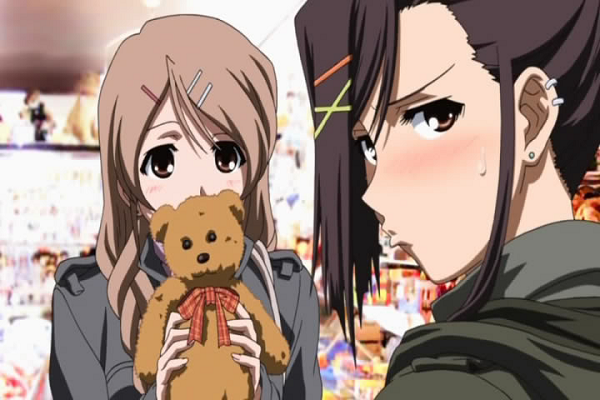 An anime with a double whammy of yuri and incest, Candy Boy deceptively doesn't have much to do with candy or boys. Kanade and Yukino are twins from Hokkaido who transfer together to a Tokyo high school. Of course, they live together, and their roomsharing goes a lot further than standard roommates or siblings. Add an underclassman who's desperately in love with one, bribing the other for little photos or keepsakes of her beloved senpai, and you get a winning shoujo ai combination. 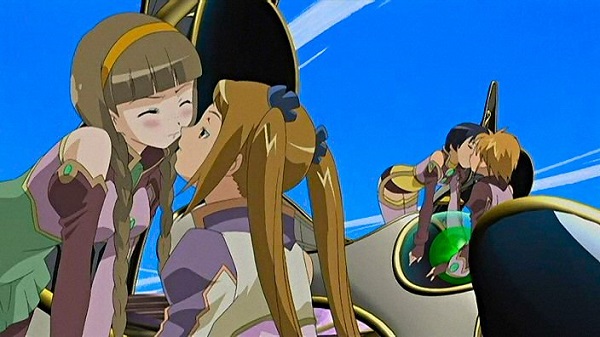 In a kingdom where everyone is born female and chooses their gender at 17, the undecided are recruited to pilot massive airships in defense of the homeland. Like in Pacific Rim, these weapons have two pilots; here, however, they are powered by kisses. You'll appreciate the fanservice, but you'll be hooked by the heavy, David-and-Goliath war narrative and the novel take on the inevitability of growing up. 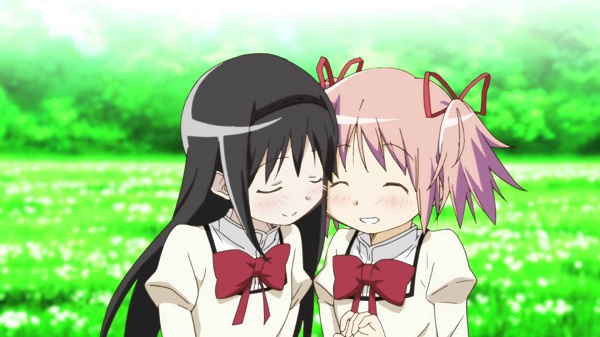 Mahou Shoujo Madoka★Magica is an epic story of heroics and true friendship. Having had an extremely successful anime run, it spawned several movies. Notably yuri-tastic is the third movie: Mahou Shoujo Madoka★Magica Movie 3: Hangyaku no Monogatari, known in English as Puella Magi Madoka Magica the Movie Part III: Rebellion. Despite the title, Rebellion's focus is on the brooding Homura, whose desire to protect her best friend Madoka drives the show's plot and reaches its logical conclusion in this heartrending film. After the series and first two movies' bittersweet take on maturity and the power of hope, Rebellion shows us how love can destroy as well as preserve. 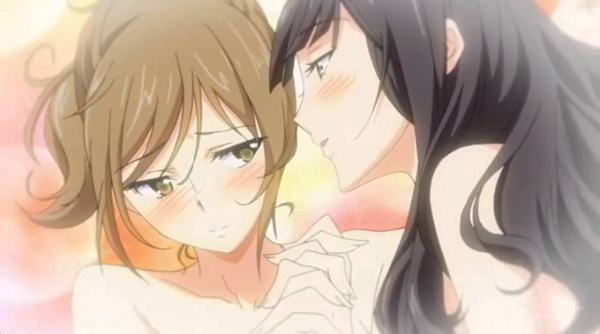 Inugami is doglike and likes cats, and Nekoyama is catlike and likes dogs. It's a match made in heaven for these two girls, who are also joined by a host of other girls who take after other animals. 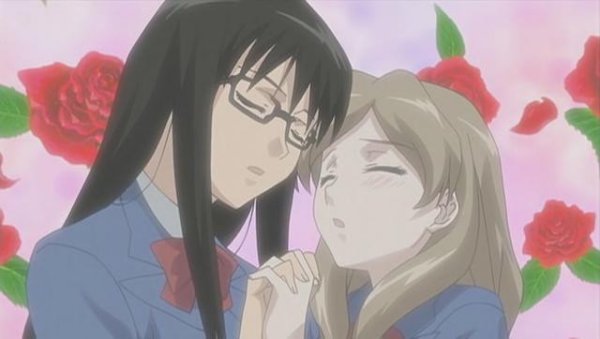 Sumika Murasame is tall, beautiful, smart, and athletic. She's in love with her best friend, Ushio Kazama, who only likes small and cute girls. Whispered Words explores not only their feelings for each other, but also the fear of expressing oneself in a world that can be hostile to alternative sexuality. It's a breath of fresh air if you're tired of cutesy yuri without closets, so to speak. 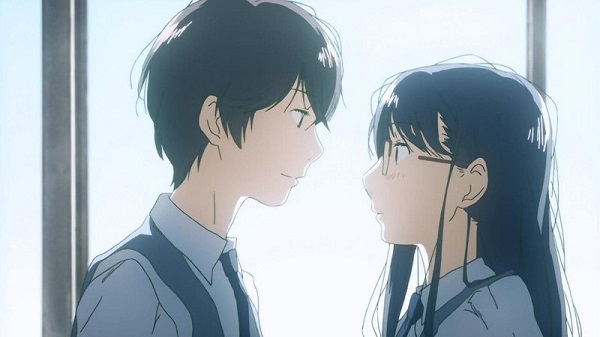 First heartbreak is tough, and freshman Fumi Manjoume has to deal with it on top of coming to a new school. She reconnects with her best friend, and they help each other through romantic troubles with their peers—and each other. Hailed as one of the most realistic portrayals of young love between girls, Aoi Hana is a tranquil portrait of four girls figuring out who they are and who they want to be. 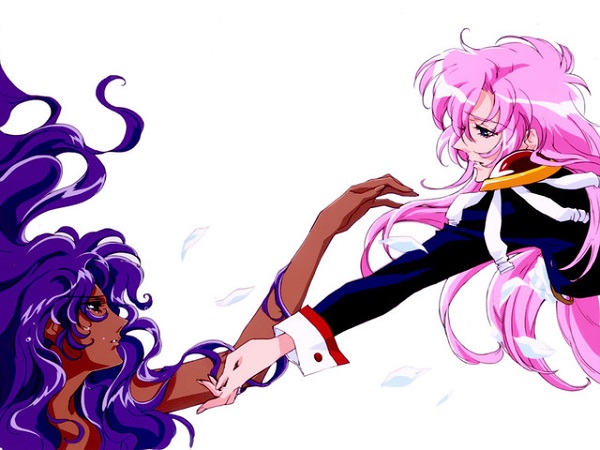 Rather than marrying a handsome prince, 14-year-old Utena Tenjou strives to become one and win the hand of her best friend, the Rose Bride Anthy Himemiya. Kunihiko Ikuhara's magnum opus explores preconceptions surrounding gender and adulthood, using plenty of surrealism, sword-fighting, and literary allusions to do so. Almost 20 years after its run, Utena is widely considered the seminal yuri anime, to which its entire genre is inevitably compared.

Love comes in many shapes and sizes. Whether it's a bond of romance, sisterhood, or friendship, there's no shortage of anime celebrating the ties that bind two girls (or more!). From cute slice-of-life to war drama to pretty much the entire magical girl genre, there's something out there for everyone looking for love at its purest. "Yuri" means "lily", after all...