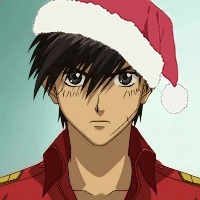 tingy Aug 22, 10:24 PM
Oh that's a first haha, I've seen people mention that it reminds them of Mushoku Tensei instead! Isekai Yakkyoku is surprising since these days I'm not expecting most isekai to really interest me, but I like that it's more on the serious side and the medical theme is definitely a new take.

I'm doing well! Hopefully you are as well :D

tingy Aug 21, 10:01 PM
Glad to see that you're enjoying Isekai Yakkyoku as well!

tingy Mar 20, 3:22 PM
Ohh, that's a nice way to spend your birthday XD Glad you enjoyed it ^^ I have tickets for Thursday~ I'm doing well!

Nakamurasenpai Feb 1, 11:44 AM
Hi! Thank you for accepting the FR! Nice to meet you!

Also, can't forget one of my first friends one MAL who's still around~

Perhaps last year wasn't the best, but this year
will surely be much brighter! 🙏

I'm doing fine I guess, lol. Thanks for asking XD Hope you're doing well, too ^^

tingy Apr 10, 2020 3:17 AM
>The only part I disliked was it felt really rushed in the climax and at the end so I kinda thought it lost some of its emotional impact.

I totally agree with this. And pretty much everything else you said about C&T XD Except Wake UP Girls, since I haven't seen that. I thought the last scene with Mother was really touching, even if the buildup was rushed. The song makes me cry haha.

And yeah, if I replied a month ago, it would've made sense about WA being hit hard with COVID-19. But most of it was (and still is) the elderly population, namely within a few nursing homes. Of course now, NY is doing the worst...I heard from my friend in Rhode Island that the police are hunting down people from NY and sending them back o_o

As for living with my sister...well, if I had responded before two weeks ago, that would've been true. My sister actually passed away 2 weeks ago, the main reason that I came back to the states so "soon" was because she needed the help. Don't feel like you have to say anything though ^^

Hope you're doing well during this time! I heard you guys are required to wear masks now...? :o

tingy Mar 1, 2020 4:56 PM
Yay! Yeah, definitely, it's always nerve wrecking to see Eijun not performing his best >< But I think it's realistic as well. He's just like any other person. First time pitching as the ace is going to be stressful even if you try to calm yourself down/mentally prepare for it!

Happy New Year!
Into a new decade, I hope it'll be a good one ♥
All Comments