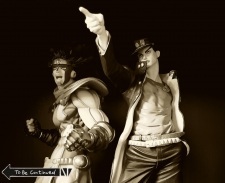 Ezekiel_01 May 19, 2020 3:49 AM
Hello Good Day! I saw you in the forums of Kids on the Slope. And I think we share the same interest. It would be nice if we talk about each other from time to time.

FoxyKitsune Jan 12, 2016 7:35 PM
Yeah that one was funny. And well his T5 ending was something about his date with Julia where he gets rejected.

Well it really depends on what I'm watching. There are some cases where I don't mind spoilers but some scenes are actually written to surprise the audience. I don't want those to be ruined for me. The scene won't be as good when I actually watch it.

Ahah! That is true. But you also have more freedom as an adult :P

Ah okay. Though I've heard people say that the voice acting in Kai is not that good. Is it?

Oh okay lol. Yeah I ended up spoiling AoT for myself too but then I forgot what it was so yay!! I'm waiting for season 2 :D

Aw I feel that way too sometimes. I need to keep reminding myself that I'm an adult

FoxyKitsune Jan 12, 2016 12:16 AM
Actually Harada did talk about that. Apparently Jinpachi didn't had the devil gene. It was just some monster that possessed him or something. Fans assumed it was devil because Jin and Kazuya have it. Heihachi did say in an ending that his father had "devil's blood" but that ending's not canon :P

Ah okay! I'll have to check it out then. Btw do you actually watch/read AoT and Fairy Tail? :)

FoxyKitsune Jan 11, 2016 1:09 PM
Yeah Heihachi's wife is in it. Apparently she was the first one in the Mishima family to have the devil gene. So Kazuya got it from her.

And I really hope they bring Jun back. I'm glad she was in TT2. Harada said she might be in future games *fingers crossed*

Hmm... Should I watch Dragon Ball first or just start with DBZ. I watched the first episode of Dragon Ball but it seems really... old? XD

Weiss Schwarz? Yeah I've heard of it. A friend of mine plays it.

FoxyKitsune Jan 11, 2016 12:16 PM
Lol yeah. They did answer most of the questions about the devil gene in T6 but the T7 trailers brought up new ones. You also find out that maybe Heihachi is not such a dick after all. I'm still curious to know how Jin faked his death.

Yeah I mean the sweeping kick lol. I keep using that a lot. I also use a lot of his juggle moves.

So I noticed you also like DBZ. I've been wanting to get into it but idk :P

Ah I love Heihachi and Kazuya. There's this one move by Kazuya that I always use to win :P

I played the early games on PS2 and the recent ones on 360. I'm a PC gamer now though. Harada said that they're considering a PC version. I hope they do :D

Well I was talking about this thread

FoxyKitsune Jan 10, 2016 10:22 PM
Lol no. I saw your post on a Blood Vengeance forum. I actually don't know many people who like Tekken, both online and irl

Well TT2 was the last one that came out. That was a good game. I'm excited for Tekken 7 too.

You mean my favorite character? That depends. If you're talking about the storyline, it's Jin. As for who I like to play as, probably Devil Kazuya.

FoxyKitsune Jan 10, 2016 8:11 PM
Hey, I know this isn't really anime-related but I noticed you're a Tekken fan. Are you caught up with all of the games?

Minna san...
In celebration of Vomic’s third anniversary, we have a special contest for you all (especially the maid/butler fans). It is Caption & Picture Title Contest carrying the theme of the most dreamy and gorgeous butler Sebastian from “Kuroshitsuji”.
We hope to hear the wackiest and craziest captions/titles from you all ^♥^... keep the creative juices coming!!!
P.S. – Do not forget to request your Miyano Mamoru SOM cards.
Thanks as always for supporting the Seiyuus ^.^

Antalk Sep 16, 2012 9:48 PM
I replied to your post. Let me know if you want to take me up on my offer. I am sure there will be others from the club who would like to donate/trade.