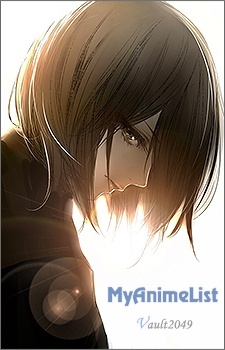 NightSkyBlue Jun 7, 2015 9:56 AM
Hey, how did you personalize your anime list with the graphic and different borders?

Orion1 Jul 28, 2014 5:35 PM
I just enjoyed the harder science fiction elements, the background art, the overall creature designs and the horror aspect in Sidonia. Favorite episode though was when he saved Hoshijiro and they had there little blue lagoon moment stranded together in space.

I think Zankyou no Terror might be the best show I watched this summer so far. Sorry to hear about the hell you're in and all my best wishes that you do escape it. My life has also been less than extraordinary lately. Decided to take a vacation because I would get paid if I didn't. Had nothing planned so now I'm just trying to catch up on some anime and reading. Pretty boring, perhaps I'll get out and golf a few days this week hopefully, but it's hot as shit outside. Best wishes.

Orion1 Jul 28, 2014 1:17 AM
Hey Vault how you been? Just dropping by to see what you were watching this season. I didn't see Zankyou no Terror or Barakamon on your list of currently watching. I'm enjoying those along with some of the other titles I saw on your list from this summer. Anyways just dropping by. Hope you are well.

Mashta May 1, 2014 4:35 PM
Randomly stumbled upon your profile page and just wanted to say hey! I think it's pretty cool that the anime we share are some of my favorites and how you have rated them very similarly to mine. Just from the ones we share, the lowest you rated something was a 6 and it may be just coincidence, but I believe that an anime has to be REALLY BAD to get anything lower than a 5. I haven't watched too many, but I have never given anything below a 6. Tbh I don't know where I'm going with this, but just once again, saying hello because it's nice to see that someone else enjoys the same anime with the same amount of enjoyment.

Etiennette Oct 26, 2013 5:27 PM
Yeah I think because S;G was so high up the top anime list that I was expecting something groundbreaking or extraordinary. Though I suppose they handled the subject of time traveling well but there are still some head scratchers.

Etiennette Oct 26, 2013 2:44 AM
I just finished watching HM-sama and Steins;Gate. I really really really enjoyed HM-sama (unexpectedly funny as heck) but as for Steins;Gate, I think my expectations for it were far too high.