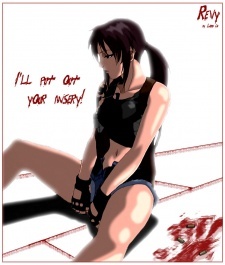 Thalializette Jun 6, 2015 11:07 AM
ahhh you know my pain, it sucks! but gotta earn that moneyyy! i had more time before cause my contract was shorter, so i had time to do stuff, but now its different.ohhh for kuroko i marathoned it too, i just couldn't wait, too intense haha! thats great that u enjoyed it!
recently i caught up with assasination classroom, watched some baccano, owari no seraph and danna ga nani. i need to catch up on so much more though!

Vindstot Jul 17, 2014 9:31 PM
Such a shame indeed. I hope someday you get some spare times to resume your favorite series with the manga.

I see.. Yeah, I'm loving both Tokyo Ghoul and Akame ga Kill. They're among the top series of the season!

Watched the 2nd episode of Tokyo Ghoul today and I must say, it's amazing! Even with the gore censoring killing off the horror atmosphere, it's still very enjoyable!
The actual plot is about to start next week. Really hyped for it!

Sure buddy. I can keep you informed on how Tokyo Ghoul progresses. Of course I won't spoil anything cause that won't be fun at all.

Sorry for the late reply btw. Had a lot to cover for the past few days. Hope you don't mind. (^^;)

Vindstot Jul 11, 2014 8:30 AM
Grave of the Fireflies is one of the most emotional movie ever! I'd probably watch it sometime soon.

Black Bullet was alright but it could've been 10X times better if they didn't skip materials from the light novel. I still liked it somewhat.

Plan to watch any of the Summer anime soon or still busy with work and stuff?

Vindstot Jul 5, 2014 6:31 PM
Our anime compatibility sure is high! You must have a great taste in anime!

So, which shows have you been enjoying lately?

yogotah Apr 11, 2014 8:36 PM
Seems like we have similar 'to do list' for ourselves. I think it's always a good thing to know what you want to do, I always have distractions around me, so knowing what I need to do differentiate between the distractions and the goals.

Being a librarian sounds like a tiring job. Especially a popular library, you probably get a lot of people and kids coming up and either causing a havoc or asking annoying questions. I wouldn't now, though. I work at retail on weekends as a cashier, and that job coerced me to accept that I am not a people person. Dealing with folks is not my strong suit, which is exactly the reason why I kept the job.

Existentialist? I have plenty of friends who classified themselves as that. I'm obviously not one, but I delve into some existentialist thinkers like Albert Camus, Thomas Buber, Satre, and so on.. Your girlfriend must be familiar with Heidegger? Since he is the most famous of the existentialist.

Telling the truth isn't the same as having to submit to any question that is asked. The robbers can continually ask me "Is she here with me.", and I can continue to say, " I don't want to tell you." I have no obligation to submit to them, but only to commit to truth-telling.

But that is a cop out.

Even if I was to tell them where she was exactly, it wouldn't be my responsibility what happens next to her. I know this sounds pretty dark and cruel but here this scenario out. Your girlfriend runs up to you gasping for air, and claiming that thugs are looking for her. You panic, and decide to keep her in a safe place (your room, your car, etc...). The thugs eventually catch up back to you and ask "where is your girlfriend, we are going to kill her." You then LIE and say, she's at the house next door. The information that you didn't know, is that once you helped your girlfriend to the 'safe place', she then decided that it would be better for her to go the neighbors and use their phone to call the cops. When the thugs arrive next door, they find and kill the girl.

Now, who is to blame for this event? Well, the thugs of course...but also you! You lied, even though you had good intentions, it still resulted in the death of someone. The big point of deontology is that intentions do not matter, we cannot control any consequence. We do not know for sure the consequences of even the smallest action, so all we can do is follow the moral code. Lying is forbidden in every circumstances.

It is really hard to dispute against Kantian deontology. There's are no devastating concerns of it ( well, except for quantum mechanics, but that's another story), but I lean towards it because I do think intentions matter, and that though deontology can tell you what not to do, it cannot tell you what you should do.

yogotah Apr 10, 2014 8:47 PM
My semester is coming to a close soon, and there's only three weeks left of school. I'm getting restless and wanting summer vacation to come as quickly as possible. Unfortunately, the last three weeks are usually the hardest weeks.

I only plan on doing four things this summer.

I will most likely have an enjoyable summer, so that's making me more anxious and anxious to get the semester over with.

Your girlfriend sure is a smart one. Her criticism of deontology is a very common one, not devastating, but nonetheless concerning. As I said in the last message, I do prefer deontology over emotivism, but I don't strictly adhere to deontology. I just emphasize with it more substantively than I do with emotivism, which I find to be socially disastrous.

But to answer the quandary posed. If a group of thugs were looking to kill my girlfriend, and I knew where she was, and they came and asked me, then according to deontology, I would be obliged to tell them the truth. And I would.

In that statement, I told the truth. I have passed the Kantian ethic code (deontologist code). I have done the moral thing, without giving the death sentence to my girlfriend.

However, even if I did decide to tell them where my girlfriend was, I still would have done the morally right action according to deontogic ethic code (Kantian ethic code, again). If the thugs kill my girlfriend off the truth telling that I said, who is to blame?
Only the killers are to be blamed, they are the one that murdered..all I did was tell the truth-telling, which is a good action in any circumstances.

yogotah Mar 14, 2014 7:21 PM
Lol Don't worry about the late reply mate. I'm on spring break right now which is why I have so much free time to write and discuss but next week, I'll also will be getting really busy, and my presence on MAL will turn into a minimality.

Do you plan on becoming a novelist? Or maybe a journalist?

Yes, that is precisely what Camus is talking about.

Many other philosopher enjoy writing convoluted works because they really only want a few people to understand. There is no need to make writings esoteric, and Camus understands that. He was actually a playwriter also, and wrote a few novels. Great author, very well known in France. Unfortunately, he died in a car crash in his early thirties...he died an absurd death. Who knows what other eloquent works he could have had wrote if it wasn't for his untimely death.

Though I've been enjoying Camus a lot recently, I will admit to you that I have not adopted his philosophy. In fact, I ultimately reject most of his notions. I think he has such a dark but beautiful concept of living. Cherishing your loved one and other relationships because they are the only thing that matter in the universe is a strikingly powerful message that truly resonates. However, I think Camus's beliefs ( and nihilism) ultimately leads to emotivsm..which I find highly problematic.

Emotivism is the philosophy that states that people's moral are and should be based on emotions, not any standard. The popular saying " well, if just felt like the right thing to do" is the epitome sentence of emotivsm. Doing stuff because you feel like it, and not because you hold a moral standard is what emotivism is about. I find it problematic because of several reasons, but one is that a society cannot truly prosper in such a state.

I don't like to put labels to myself or anyone, but I would say that I tend to lean towards deontology more. Immanuel Kante has been the most influential philosopher of mine. He's the ultimate deontologist, lol

yogotah Mar 8, 2014 8:51 PM
Glad to hear that you enjoyed the Camus briefing. I could have wrote more about his philosophy to give you a better synopsis but I was cautious since you only asked me who my favorite philosophers were, not their views. I'm glad that you liked those short synopsis enough to buy more information on it. Actually, the best book you can buy is a translation of "the myth of Sisyphus" by Camus, well, actually the whole pdf of it is free online, and it's his actual writings upon the very subject that wrote to you about. I don't find Camus to be that esoteric of a writer, I think he is accessible and I think you will enjoy his work tremendously. If you have any more question on him, I'll be happy to elaborate.

Don't put yourself down like that. Everyone starts as a novice, though I am majoring in philosophy..I'm mostly doing independent studies. Since I can't go to classes, due to major conflicts with my math and physics classes, I am left to do much of the philosophy readings and teachings to myself. Most of the stuff I know from philosophy didn't come from a teacher. So that should tell you that even by reading more and more books, you will eventually be able to get some of these philosophers and not only keep up with a discussion but even be leading some.

You are welcome. To be honest with you, the types of folks that get antsy on forums are folks that are lacking in real life. Not to insult them or anything, but if your personality is imprisonment due to social structure, then you will try to lash out using a different medium. Forums happen to be another mediums for those to release their frustration of their lives and world. If you are living a productive and healthy lifestyle, you will the banality of those actions, just as you and I have observed.

I'm glad you enjoyed my profile. I mostly rambled a little regarding some parts of myself, ugly bits and all. I hope you didn't over-think commenting too much, though. I'd love to have a chat whenever you're in the mood for one.
All Comments