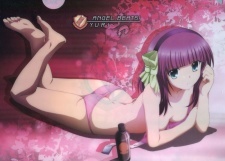 Outfrootz Dec 15, 2020 11:48 PM
bro dust off your figures before selling them :/ at least have some respect for your buyers.

"I’m totally fine with anime having deep, complex meaning and conveying some political or social message, but there has to be something else there that’s worth getting invested in. I don’t analyze Utena because I want to know what Ikuhara’s saying, I do it because I care about Utena, Anthy and all of their amazingly written costars. I don’t binge Cat Soup over and over again because it explores the conflict between family and religious values, I do it because of the little boy cat trying to save his big sister cat. All of the depth these pieces of media have is just icing on the cake, with the cake being stories and characters I love and identify with. Depth is great, but unless you’re given a reason to care, it can never become poignant. I didn’t mention it before, but there’s another way surrealism can be used in a narrative. You can use it as a distraction from content that’s not strong enough to stand on it’s own. There’s a LOT of anime that do this, from Haruhi Suzumiya using it to keep viewers from falling asleep during it’s endless philosophoical monologues to... Well, pretty much anything directed by Akiyuki Shinbou, for better or worse."

Really interesting statement. I was thinking a similar thing, that the appeal and/or merit of an anime lies in its aesthetic/emotional aspects and the deep messages are the icing on top. You can take an intellectual topic, and embed it in a cute girl doing cute things anime, but does that automatically make that anime a must watch? Does it make me dumb because I'm not appreciating the topic because I don't like watching cute girls doing cute things? Why wouldn't I just read a book on the subject?

It all gets really confusing, because a lot of reviews would play up the thematic significance of a series like it broadens your horizons, expands your mind, or otherwise changes your life, and I would feel like I was missing out because I didn't get it.

All in all, it's easy to say that art should entertain first and foremost, but this gets mixed up if people's enjoyment of it seems to derive from their understanding of its message. Which is why I forced myself to analyze each episode of Utena even though I didn't care for any of the characters lol (If you're interested, you can read what I got from it in my review. ) I wondered if I would enjoy the series more if I understood it better, but ultimately, I didn't.

I also forced myself to watch SEL, not expecting enjoyment, but rather just to check out what people are talking about when they say something is "deep and profound". Idk if it's deep or profound, but I don't really care to find out. From what I can understand, its metaphysical ideas have no practical relevance in my life because I'd rather do something more useful than spend my time worrying about whether or not my perception of reality and self is real. By contrast, I think Utena's themes about sexuality and love are more relevant to my understanding of people.

Interestingly, I've heard some Lain fans say that they love the series because of their emotional connection to Lain, especially towards the end.

Btw, I really enjoyed reading your Excel Saga review. It's one of your best writings yet.

There's a friend of mine that's been reading your reviews recently and would like to talk to you about them over Skype or on Discord.

If you're interested, here's his Discord link: Juden, Nickles#2727