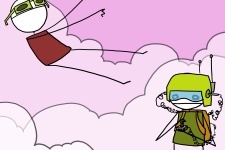 JusticeUndone Oct 20, 2010 5:13 PM
Really good review on Elfen Lied. I feel exactly the same as you watching it and share the same opinion. Only that I rated it lower..
Also I was the same.. watched 2 eps some months ago and now I'm trying to finish it watching it together with a friend of mine... more laughing actually. We laugh more than in comedy anime... lol

sugarplumfairy Dec 18, 2008 2:44 PM
brilliant review on noein. really told me everything i needed to know and no more or less. great!

Ah E7, what a non-thriller. The only 2 good episodes were the season enders (eps 26, & 50?) Pseudo Holland jockulartiy here. I don't work w/ Mr. R. Green anymore so I haven't been able to bother him w/ watching more shows.

I've noticed that Tetsuwan Birdy Decode showing up on peoples lists here and there - I may have to check into it.

As far as how I've been.... we'll just say I'm living in a soap right now. Too busy w/ work (actually I think I'll be in Montoursville soon) ~ 8000+ computers for PennDOT, and the weekends are barely enough to rest/recuperate. And now the leaves are starting to change color. AAUUUGGGHH Damn you autumn!

BBL got to go oil up the rake! bye!

I think I'll check out Hakaba Kitarou too.

midori- Jun 12, 2008 3:47 PM
oh read my elfen lied review, I tried toread yours but ended up skimming cause it was likea huge chunk but parts I did read were intesrting and Iagreedw tih.

susonauta Jun 10, 2008 5:06 PM
Hey I've just finished the second of your recomendations Kemonozune, and is going to be one of my favorites, absolute amazing voice actors! I was really impresed with this show. Thanks

hounddog May 4, 2008 8:07 PM
I haven't been in there in awhile, to be honest - poor and busy and all that. :) Actually for the next month I'll be in South America, but after that we should definitely hang out! I might be working at the Starbucks down by Foward Ave this summer, so you should stop in there too. :P

hounddog Apr 29, 2008 9:11 AM
Hey! You recommended Kemonozume to me forever ago, and I just finished it - thanks for the recommendation! I really liked it a lot.

Kineta Mar 26, 2008 7:03 PM
I've almost made my way through half the recommendations you gave me back in November (if you even remember xD). I've got Mushishi down (awesome), Code Geass (also awesome, albeit psychotic :P), Terra e (1/4 through) and Gankutsuou (just beginning!).
So I figured I'd swing by, say hi, and say thanks again :D

stationry Mar 11, 2008 3:40 AM
Ah, well I respect your opinion. I do have several friends who really dislike Elfen Lied. It seems to be a love it or hate it anime. Thanks for the response, I hate feeling like I am conversing with a wall :P.

stationry Mar 8, 2008 3:13 PM
Hey, I just read your Elfen Lied review. You're ofc entitled to your opinion but I'd like to tell where I think you misunderstood the anime. Are you intrested in psychology? Because I think you need to be to like Elfen Lied. Sure there are people who like it since they have no standards and just like anything with a cute-appeal character, but you dont seem to be either one of those.

Nyu represents the inner innocence of very young children who have no real experience in life. Kota represents that innocent child but has been twisted due to hardships in life. The psychology of Kota seems to be based on the psychodynamic perspective. Where the unconcious part of Kota protects him from the memories he'd be better off not remembering. Yuka seems to be built around the psychodynamic perspective as well, seeing as her main drive in life is primitive love and affection, to the point of her alienating anyone who could pose as her enemy in her hunt for her ideal mate. Lucy also seems to be based on the psychodynamic perspective, representing the agressive drives of our psyché. How we are slaves to our motivations, we don't "choose", we just do whatever the circumstances force us to do.

Humans are weak, I think you watched too many movies/animes if you go around thinking humans generally aren't all weak characters, we all are weak. Deny it all you like, but that is the truth as I see it. Instead of putting forth easily sympathized with characters, the anime represents characters with many faults whom might be rather unsympathetic (personally Yuka got on my nerves more than just several times), which forces us to view them as we might've viewed a fellow human being instead of seeing them as a "main character". This forces us to think of ourselves in their position in order to understand their actions. Keep questioning their actions, instead of thinking, his/her actions are stupid/illogical, ask yourself "why is he/she acting like that?". And in order to understand their behavior we need to understand basic psychology.

Personally I'm not a supporter of the psychodynamic perspective, I still find it rather intresting though, but I'm not saying that it might be one side of the truth of how our mind works.

P.S. About the horns you were complaining about, did you ever consider that the horns are the Diclonius part of the brain? In the end of the series Lucy loses her horns but might still be alive. So she might be able to live a normal life after all.