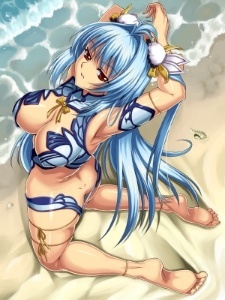 DemiFiendRSA May 1, 10:13 PM
Yeah, we added each other on discord years ago, but you already know that. I think it'd be best to continue our conversations over there considering how much of a slowpoke I am at responding on this site, but that's up to you if you still prefer having our conversations here.

Cool that you were able to get a Special Edition of that game. Still no sign of a reprint. And now there's going to be a third game coming out this year. I'm gonna try to see if I can get my hands on that special edition on the Nintendo Store.

It kinda happen again with the Toei Animation hack a few months back. It even affected the theatrical release of that new Dragon Ball Super movie.

Ouch. Glad that you were able to overcome it. The only time I got sick during the pandemic was when I got food poising at a restaurant. Hmm, I guess there's some truth about how deadly it can be depending on a person's immune system. One of my great aunts that was over a 100 years managed to overcome it after catching it before she passed from natural causes. One of my other great aunts wasn't so lucky, though, and one of my friend's mom from high school passed away from it. I ended up going to a theme park, a concert, a con, and plenty of movies once things started to calm down a bit, but I still take some caution in it. The only bright side to the pandemic for me was that it gave me some extra time to catch up on things and it gave me an excuse to cover up my face in public without giving me any weird looks LOL.

I still enjoy the One Piece anime despite its pacing issues. The recent episodes directed by Megumi Ishitani are amazing.

Wow, it's been a decade since the anime ended. Time sure goes by fast. Well, probably get some actual footage from the final arc soon if it doesn't get delayed from its Fall 2022 release period.

Most of the voice cast from JoJo PS3/PS4 games didn't reprise their roles in the anime, so it didn't surprise me. What did surprise me was Netflix getting Stone Ocean. I just wish the release for it wasn't so slow. Yeah, she is. It's interesting that both the Japanese and English VA of Jolyne got their dream roles. Speaking of All-Star Battle, they're releasing an updated remastered version of it. The Anime cast is replacing the original VA from the game. I'm curious to know which of those 9 characters they'll be adding in the updated release.

Yeah, I had more times to do other things and I've been doing well. I hope things have gotten better for your family after your loss.

Lol, those gatcha games, once they have their grip on you, it's over. Big part of the reason i don't even want to get into them, but hey if you enjoy it =P

Yeah, i read that unfortunately the turnover rate for Pokemon games is low because they have to keep up with the anime too. Like, a new game needs to come out, so the anime can progress, so merch can be sold, and so on, it's a self eating circle. They can't take 5 years or whatever to make a new game lol.

"I'm quite experience in getting sick" is a great sentence lmao. But nah, we'll just have to agree to disagree there then, i've had all of the vaccine shots and such and i'm fine.

I don't even have that much, there are people on here with 1000 plus friends for some reason lmao. And i only talk to like 3 people on here. I don't really use this as a social site, but the social site is like an additional benefit, if that makes sense.

shockzz1234 Mar 9, 10:05 AM
More games are coming out yes, but how many of those games are truly "great" games? Not many. A lot of them are just average games.

True, but is it getting any smaller of a backlog? Lol. The list may not be growing, but it ain't getting smaller either i bet =P

I legit only use my Switch for Pokemon lol. That's it. So i used it recently to play Arceus, but now i'm done with it so i probably won't touch it again till Pokemon Scarlet/Violet come out later this year.

Sure, i suppose. Actually apparently wearing masks boosts your natural immune system, but i ain't a doctor so lol.

Btw your friend request confused the fuck outta me LOL. I genuinely thought we were already friends this entire time, what the hell? Lmao. How did that even happen?

I actually have a PS5 now! I got it recently, about two weeks ago, i was luckily invited to a Sony direct event or whatever it's called that let me get one online. I wasn't too fussed about getting one but since i had the opportunity, why not? And yeah, my brother did the who follow accounts to get a PS5 method. It worked, eventually.

Yeah and i barely use my Switch tbh, so there's no reason for me to personally get one lol.

Well as long as you maintain distance i think it's fine tbh.

What have you been up to lately? 😊

shockzz1234 Jul 10, 2021 12:38 PM
Huh, strangely for me PS Plus doesn't really add that much to my backlog. I can't remember the last game from there that interested me or that i didn't already have lol.

Yeah, Persona makes sense too since it's getting bigger as you said and it's a "monster catcher" type game which lends itself well to gacha. Lol there's a subset of SMT fans that really, really hate Persona.

It's only gotten worse lmao. Especially in the big cities. I suppose it's true for a lot of places though.

True. I still kinda look out for a PS5 these days. If i can get one, i'll get it but i'm not in a rush. Actually tbh, improved consoles are just a thing for a lot of companies. The Switch just got the OLED model, which isn't a big improvement but it's still an "improvement" lol.

Yeah but tbf those maskless people always existed even when the pandemic was at it's height. So i doubt much has changed for them now that it's lessening.

shockzz1234 Apr 14, 2021 9:02 PM
I thought that would happen to me when i started working, but it unfortunately (or fortunately depending on how you look at it) didn't. Now i just have less time to play the same number of games lol.

Pokemon at least makes some kinda sense lol. I heard Persona might be getting a gacha game. Because of course.

It very much is. Still, i'm at least ok with it for now.

Makes sense. It's all about the profit lol. And yes! That's true. I didn't even think of that lol. There's gonna be like a PS5 Pro or something lol. That actually just makes me want to wait until that comes out now lol.

Yeah. Tbf other countries should have taken it seriously as well, especially in the west. We kinda just looked at it like "eh, no big deal"....it was a very big deal lol.

It's fine. I haven't been playing online much anyways LOL. I noticed that physical copies for Xenoblade 2 & Torna – The Golden Country have gone up in price. The release of Xenoblade: Definite Edition and Pyra / Mythra in SSBU probably was the cause of that. I should've bought them when I had the chance. I hope Nintendo reprints them, but I'm not holding my breath...

A 2 month break can feel like a season, I guess. It seems like the TV broadcast for Kingdom was affected the most with the Covid-19 delay. It's finally gonna restart its third season soon after a year.

Wow it's already been over a year since the pandemic started. A year since some people went crazy over toilet paper. I'm fortunate that I never encountered any crazy anti-mask people in person. Some movie theaters and theme parks have started to open, but I probably won't go to them until it's 100% safe. That probably won't happen until 2022...

Burn the Witch hasn't really impressed me so far. The movie is slightly better since it adds a few scenes. It's nice that Kubo is working on something again, I guess. The "second season" of the manga still hasn't started yet.

Sure, the mobile games probably contributed to that. I also think it's the fact that it's still one of Weekly Shonen Jump's top seller and the 20th anniversary being around the corner.

Yeah, it wasn't because of Covid-19. Yeah, it did free up some time especially for my grandma who did most of the work.

A gacha for Mario Kart? Lol. how does that even work? I guess better vehicles and stuff?

Yeah, i've never been to California. Or anywhere in the US lol. And lol i'm used to expensive living, unfortunately. Hopefully i can move somewhere cheaper soon lol.

Yeah, using the power of bots lol. I almost caved the other day and thought about buying from a scalper but NO. I will persevere!

Yes, but hopefully it'll be more manageable in the near future lol. To think all of this started because a guy wanted to eat a bat. Crazy.
All Comments