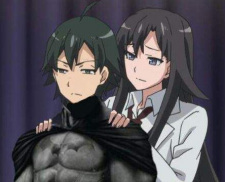 P.s. kudos to you for being able to enjoy Nagatoro, at least you were watching one seasonal. It’s pure mandatory suffering for me, on the other hand.

Peeti Jun 10, 6:52 AM
Aot season 4 part 1 is defeated by March comes in like a lion. I wonder where June comes in like. Holidays?

Monkey_Business May 25, 11:53 PM
I see, Megalo Box S2 is already better than S1 in like 2 - 3 eps. I watched the first ep of Fumetsu no Anata e and honestly it looks promising. Wait what Vivy is from the author of Re:Zero?? Damn. I never knew that. I liked Re:Zero so I'll check it out, however S2 Part 2 was good but the characters just became stereotypical. Like it went from good characters - 3 dimensional characters. Everyone is just like "I've been through shit but now I've changed" thing you know.

Man I really want to watch the 3rd Season too. The sad thing is, I heard that due to some things like for example the VA of Kaguya being busy voicing Paimon in Genshin Impact and other stuff, there are chances the Season might come next year. I'm really looking forward to it.

Yeah, it's like the Uzaki-chan of this season. I heard it's fun to watch, I saw like 1 scene and it looked pretty fun. I've always known about the manga for some time, the readers are pretty chill. Yeah I can understand if it gets repetitive, the story sounds like something that could eventually get repetitive if it doesn't evolve or change. I heard that it's just fine but twitter idiots are just taking it overly serious.

Man I hate this generation, I wish I was born a bit older, everyone acts like their 200 years older than how much they actually are (I do too except I don't take everything seriously like them) and stuff like tik tok and twitter is just full of toxicity. Have you ever felt something like this?

Monkey_Business May 25, 9:14 PM
I see, I have recently kind of stopped watching seasonals too. After watching like 2 eps of Beastar S2 and then binging the rest when it was finished, I realized that binging it is way better. I want to binge Megalo Box S2 and etc when it's done. I'm also pretty interested in Vivy.

Btw dude, I watched the OVA cause I just couldn't handle myself, I really needed to watch it. Man the OVA is great, the fanservice is only like 5 - 8 minutes and it's so fucking funny. The rest is just funny. Now I realize why I used to put Kaguya-sama at a 10, it's just so great.

Monkey_Business May 25, 1:46 AM
Dude, can you recommend one Seasonal that I HAVE to watch, like something that is great this season, probably AOTS.

It'll be great, I remember having Kaguya-sama as my favourite anime back when I started watching anime. The Openings are all great, everything is great about it.

Monkey_Business May 23, 7:52 PM
I see, but well since I'm in my teenages, I've always wanted at least a small bit of fanservice (I also don't in the same time cause that will just ruin the anime, but as an OVA it would be cool) and based on my pfp you can tell that I used to be a huge Chika fan. This is the equivalent of the Holy Grail for me. I really can't wait.

Hmm, I have a feeling the 3rd Season will air around the end of 2021, hopefully.

CrimsonCW May 20, 10:46 AM
How many other franchises did One Piece spawn, by the way? That aren't also in the same medium of anime or manga?

GodOfWolves May 18, 8:39 PM
I hear that lol - probably the only benefit to me watching only dubs is that my plan to watch is finally growing smaller, now that i've seen more or less most of the good dubs out there and only have a smallish list left to get through of some older things thats been on it forever

GodOfWolves May 18, 5:11 PM
Sorry i cursed so much last reply lol - but yeah overall log horizon is meh, but might still be worth a watch if your bored or somethen