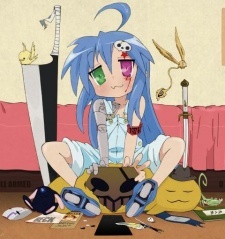 NoHeart Aug 28, 2016 6:51 PM
Hello. I read your profile description and got curious: are you still disillusioned?
And if you wonder how I got here, it was because of your club: "Light Novel Club!"

Phraze Jul 12, 2014 12:14 AM
Hi, just joined your LN club. ^^
Noticed your profile info by the way, it sounds kinda sad.. This person and this person are both nice people, if you want someone to prove you wrong. Should I include myself?

BlackRegis Jun 17, 2014 7:46 PM
hello, i was originally here to ask you a question about light novels and your club, however apon reading your profile it's much more now, and i'm here to prove you wrong

I joined MAL for a club which like you have stated by the people - arn't very nice at all - but i had some good times or fond memories of when it was OK and made my own, now while slowly building my club back the the previous ones former-no-corrupted glory i randomly look through users to talk to, that or to give them a comment so their profile isnt so blank, giving them a little color

From the New World really shocked me since it never seemed like it would end up the way it did. I really enjoyed this "Neo-Buddhist" kind of culture Saki lived in. It all really came together, so kudos to the author for the excellent world building there. From what I heard, it didn't do so well in DVD sales, which is a real shame. Sentai released it, so when I go to the next convention they'll be in, I'll be sure to buy it.

Yeah, from the cover, it looks out of touch. I can't believe it got licensed and the novel didn't. Sometimes I dislike the attitude of the industry. Same thing happened to DRRR!! (The manga version isn't bad, but the novels are nicer IMO.)

After I read your message, I remembered I didn't quite finish it. I really like it! It's got the quirkiness of Adventure Time with the anime references. I'm so glad the Kickstarter was successful. They've got 7 or 8 episodes fully funded just from that, so I can't wait for more!

I'm so sorry for not paying attention to my messages. I really need to hold myself accountable for this.

kkwt Jul 29, 2013 3:59 AM
Your "about me" section is the most adequate description of the community of this site I've ever seem. It annoys me a lot as well, but I still hope there are actually many open-minded m&a fans who can appreciate the western culture as well. :D

The anime really shook me. I haven't seen such a shocking show in quite some time.

NanoZero Jul 20, 2011 12:06 PM
Go with Bunny Drop, I say. I tried Blood-C the other day and it was a total disappointment. It just... doesn't make any sense to me. Everyone else will tell you the same. But I've been wanting to try Bunny Drop too. So many Summer 2011 anime to watch...

I agree. As long as it may be, I think it just isn't enough. It's almost disappointing. They're like short stories in many ways. It's hard to end such little stories so nicely.

That's great to hear! I need to try that one out for sure!

Yeah. The first few start out strong, but then it becomes a mess. I hate it when that happens! Oh, and did you like AB?

I recently finished my copy of Book Girl volume 1. I really enjoyed the characters, but I'm confused as to which genre it should be labeled. It goes into so many at once! My local Barnes and Noble didn't have the second volume in stock, so I had to order it and pick it up when it arrives. Borders was never like that. I miss it so.

Also trying to track down the Zaregoto books. They may go out of print before we know it!

Good luck! I hope it all goes well!

NanoZero Jul 5, 2011 1:23 PM
Finishing up stuff is a good idea. I recently finished Railgun after buying the first volume of the manga, which came out in the States recently. So far, I think Seven Seas is doing a good job with it, and I hope they continue it. I've been also watching a few Summer 2011 anime, like Ikoko Meiro no Croisee and Kamisama no Memocho. I'm definitely going to keep on watching Ikoko Meiro, since it reminds me of Aria too much. As for Kamisama... I'll wait and see how it develops. It was about 45 minutes long for the first episode! It was based on an LN, so that doesn't surprise me too much.

Oh god, I'll admit, HSOD is a bit trashy IMO. I recently watched some of that too, and I agree that it's a little too much. From what some people have said, it goes downhill, so I don't think I'll finish it. I've heard the manga was worse. XD

That's interesting! I've been trying to catch up on some more than starting new ones. Though I should start some more LNs.

Oh noes! I hope you find them again! That totally sucks!

I've heard! It's really good, you should check it out! It's truly unique IMO.

Orz, I need to catch up on my Spring 2011 anime. And this reply is super late, I apologize!

Yeah, for the time being, ANN is satisfied with it. But it looks to me that the plot's going to go downhill soon. I can just tell. You'll have to tell me how Blue Exorcist is!

Steins;Gate starts out pretty confusing at first, but it explains itself soon.

Haha, true. I've been finishing up some series that have been on my watch list for a while. I just got around to it.

As expected of CR! Right now, I'm only looking forward to C and I watched Steins; Gate. So far it's pretty interesting, but confusing at the same time. I have hopes for it, so I want to keep watching it and hopefully finish it.

I've heard of it. A few people have high expectations for it. I'm not sure about it myself.

Me too. If I had the money, I would buy plenty of them. XD
Though I caved in and bought 100 Masters of Bishoujo Painting, which is an awesome artbook that I would recommend to anyone. Surprisingly, I found it at a local museum store. You never know what you'll find!

Cherish them. Cherish those episodes you have. For me, I watched How to Train Your Dragon recently, which I loved. I heard there will be a second one, so I'm definitely looking forward to it.
All Comments