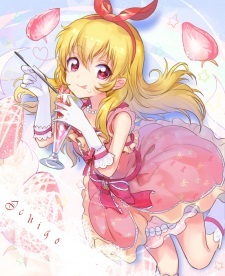 Three examples of why KyoAni aren't the best studio. Yeah, their animation quality is high and they have made some impressive stuff like the first series of Haruhi and Disappearance, plus Clannad is definately worth the watch.

Also, pretty much everything they've done has a school setting. Nichijou, Lucky Star, Clannad, K-ON!, Haruhi, FMA, all of their major shows are in the same damn setting. Yes, KyoAni are a decent studio, but they aren't the best.

Frankly I'd put Gainax, SHAFT and Production I.G. above them, and potentially Bones as well. Hell, even with Madhouse's recent slew of terrible Marvel adaptations they've still brought way too many good things to the table to discredit them from being one of the best as well.

But hey, at least they aren't Studio DEEN.

sgrgnriognag Jan 9, 2014 1:53 PM
Nope, my birthdate's correct. Thanks very much for the compliment, though! I try to watch a pretty wide variety of anime. I see you seem to like the Aria series, too. From what I've see of the first season it's shaping up to be a really cute and relaxing show!