Ex: Code Geass
I see more bashing on Twitter than the fanboy talking about it.

However, the real interaction is in the QTS lol

ApacheSnow69 Jun 21, 5:22 PM
Anitwitter is soo stupid to interact with.

Them in a nutshell: Copy + Paste 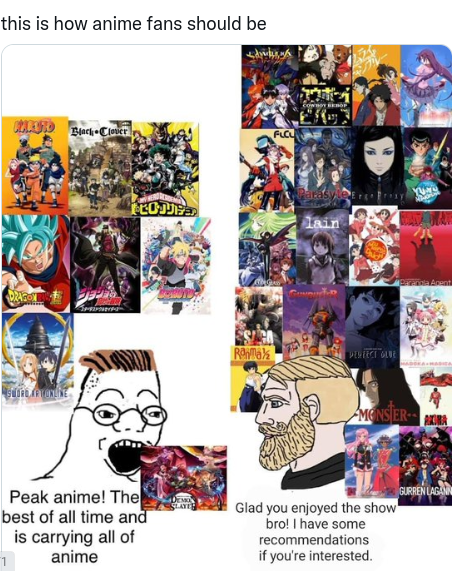 Rerrius Jun 20, 1:30 PM
Contrived situations and characters doing the most stupid and random things for the sake of the plot are things that happen often in Code Geass, like when the "genius" Lelouch decided to joke about ordering Euphemia to massacre the japanese and then his magic eye accidentally activated.

And the fanservice... in one moment this is an anime wants you to take it seriously and in the next moment the camera focuses on the girl's ass in the mech, lol.

Yeah, the Vinland anime moved the Thors flashback to the beginning but that's about the only significant change. I also prefer the way the manga did it because it introduces the premise and MC better, but it doesn't matter much at the end of the day.

I think there were also some minor changes in the scenes around when Thorfinn fights Askeladd and loses to him for the last time, but I'm not sure.
I prefer anime over manga as a medium, so the anime is still better for me due to it being a faithful adaptation for the most part.

Story, characters, and enjoyment have the biggest influence on my ratings; I put animation, art, OST, and some other factors into consideration too, but they don't influence my ratings as much as the other stuff. I tend to be forgiving towards a good narrative with lackluster animation but the opposite doesn't apply, good animation can't carry a horrible story and characters for me.

Death Note went downhill and became really bad after ep 25, but I never liked Code Geass due to it often using plot conveniences and asspulls from the very beginning, on top of it having dislikeable MCs and characters in general.

Rampant Jun 19, 9:07 PM
My problems with Monster if I can recall them laid with the repetitive plot (it repeated the equivalent of an "arc"), overall dull dialogue, and incredibly low stakes for how grim they act for the length of a relatively long story.

Rerrius Jun 19, 11:15 AM
I mostly agree with you about Thors. Trying to save the slave isn't something that I take issue with since it's a compassionate thing to do and it seemed like he knew his family would manage without those sheep, but when there are people who are clearly trying to kill you and might even kill your child afterwards, you choose to take on them with your fists while preaching "A true warrior fights without a sword"... really? It's unbelievably stupid and naive, in that kind of situation you have every right to defend yourself properly instead of taking idiotic risks because you want to spare the lives of mercenaries and murderers.

Thorfinn is also stupid for letting Askeladd use him for so long because he wants to kill him in a fair fight, but at least this part of the story did acknowledge that he's stupid, instead of later when it praises his stupidity and grants him even more plot armor.

I agree with you about Askeladd. Morally speaking, he was a terrible person but he was an interesting and well written character in the series, actually the only one, lol.

>I'm the only person who can throw a spear and conviently impale and kill exactly 3 men from over 500meters away hahahaha.

That's one of the things I meant when I mentioned superhuman and unrealistic feats. Thorkell pulls all kinds of bullshit that challenges your suspension of disbelief whenever he's on screen, he's a meathead who loves fighting/war and that's his entire character.

Canute may have been a character that I would've liked if his character development was gradual and handled realistically instead of the 180 he pulled, and if he was actually relevant throughout the story. "Emotionally weak boy grows into a man because of the world and his circumstances" isn't a bad idea, but the execution absolutely is.

>I was checking out the story arcs and next arc looks 10 times better.

I wouldn't say it is at all, I started hating the series after that arc. Your issues with the shallow Viking portrayal, characters and plot armor are going to carry over unfortunately.

I'm surprised you gave Vinland a 5 despite what you said, it's higher than I would've expected.
Do you have a personal rating system? And if not, what's the rating where something becomes "worth watching" for you? For me it's 6/10.

They used to have anime video cassettes??!! Oh bummer :(. I collect mainly manga, nendoroids/figures, and pins (: do you regret selling any particular item cause of nostalgia or monotal value ?

Yepp, I used to live somewhere that had tons of snow during the winters and my parents would always complain about how to reshovel the driveaway aha.


Do you collect any anime merch like figures, manga/ln?

Rerrius Jun 17, 6:50 AM
I liked the anime back when I watched it, but after thinking about it better, I found that it was mostly carried by Askeladd and the last 6 or so episodes, the rest was mediocre at best.

Canute's character development was badly done, he pulls a 180 like Kaneki Ken all of a sudden, and I didn't like how characters can sometimes perform superhuman and unrealistic feats in an otherwise realistic setting.

I started to dislike the series after reading the manga tbh, I have problems with Thorfinn's character and how the main themes of the series are handled, but I can't say more without spoilers.
Have you read it?

Assthete Jun 17, 6:39 AM
many ppl have told me the ending is 'ingenious', they've just never convinced me of it. they loved acting like im 'colorblind' to its significance, but it doesn't really work like that. nobody would claim a color is ingenious. it's neutral, unlike the emotive glorification of a plot point, which can actually be analyzed. their analysis just sucked and i guess it's easier to throw shade than actually convince someone these days. frankly, im fine with it. just like they can call it ingenious, i can call it silly and anticlimactic. who's gonna stop me?

Assthete Jun 16, 7:45 PM
haven't read it. hear wonders about it, so it's probably all right.
All Comments